We speak with Reuters investigative journalist Aram Roston, who has revealed a leader of the extremist hate group the Proud Boys, which played a key role in the Capitol riot on January 6, has a prolific history of cooperating with law enforcement. Court records show Enrique Tarrio was an FBI and police informant in Florida who went undercover in multiple drug and illegal gambling investigations after he was arrested in 2012. This comes as the Department of Homeland Security warns of a heightened threat posed by “ideologically-motivated violent extremists” angry over Joe Biden’s inauguration.

We end today’s show with a stunning story about the Proud Boys, the violent, Trump-supporting, far-right hate group that took part in the Capitol insurrection three weeks ago. Reuters revealed Wednesday the group’s leader, Enrique Tarrio, has a past as a “prolific” informer for federal and local law enforcement, repeatedly working undercover for investigators. Reuters cites the transcript of a 2014 court hearing where a prosecutor argued for a reduced sentence for Tarrio in a case by telling the judge, quote, “I have never had a client as prolific in terms of cooperating in any respect.” He’s talking about cooperating with the government.

The news comes just over three weeks after Tarrio was arrested in Washington prior to the insurrection for burning a Black Lives Matter banner at a historically Black church in Washington, D.C., during a December protest. Tarrio also faced weapons charges, because he had illegal high-capacity magazines of ammunition on him at the time of the arrest. Enrique Tarrio has led the Proud Boys since 2018.

So, Aram, talk about the significance of what you found, who exactly he is. And also, interesting that he was arrested right before the insurrection, so he couldn’t take part in it. Tell us the story, from the beginning.

ARAM ROSTON: So, Enrique Tarrio is, of course, the leader of the Proud Boys. He’s very high-profile now. We’ve all seen him in videos of leading the Proud Boys in Portland or Washington, D.C., in prior “rallies,” they call them.

So, we [inaudible] transcript of a hearing he had for a 2012 case, a criminal case in Miami, a federal case in Miami. And that hearing, as you mentioned, it was an effort to reduce his sentence, a 30-month sentence, by telling a federal judge about the extent of his cooperation. The federal prosecutor, an FBI agent and his own defense lawyer listed sort of numerous cases in which Enrique Tarrio had cooperated with local authorities in investigations, including undercover, multiple undercover investigations, they said. And on the federal level, they said he helped put 13 — prosecute 13 people on federal cases.

We thought the significance was because, of course, his current organization, the Proud Boys, is very closely linked to the investigation that’s going on now by the FBI into what happened at Capitol Hill on January 6th.

AMY GOODMAN: So, Enrique Tarrio told Reuters, quote, “I don’t know any of this. I don’t recall any of this.’ But after your story broke, he wrote on Telegram, quote, “The article sensationalizes the fact that in this case there was some heavy cooperating.” He went on to say he had, quote, “addressed this before in podcasts and other interviews,” unquote. Tarrio also wrote, quote, “They have proven that if you cooperate with the US government they will hang you out to dry… So my question is… is it worth it?” Can you talk about his response and also the history of the Proud Boys, who they are? This violent, white supremacist, male chauvinist, murderous group killed law enforcement in Oakland, California, for example, Officer Underwood?

ARAM ROSTON: Well, I’m not sure if that — if the Proud Boys was involved in that case or not. But let me talk —

ARAM ROSTON: Yeah, yeah, exactly. Yeah, the boogaloos, which are a different sort of movement. That said, the Proud Boys have been involved in many violent clashes, and obviously in the January 6th case.

They were founded, really, in 2016 as this sort of opposition to the so-called political correctness, and this idea that it would give men who were silenced a voice, and these sort of things. And it sort of was — they often call themselves a drinking club, and then they’ll say “the drinking club with a patriotism problem.” That’s the way they often define themselves. But they’ve evolved into a pretty political — a powerful political force. And you’ve seen them — Enrique Tarrio, you know, he’s been photographed with numerous sort of political heavyweights. He took over in 2018. And when I say “took over,” he was elected as their chairman. He’s the most vocal person affiliated with them. He’s the most recognizable person with them.

And you mentioned his response here. It’s clearly at odds — we’re relying on a federal — you know, a court hearing, a transcript of what actually happened in court. An assistant U.S. attorney, his own lawyer and an FBI agent go through these issues of cooperation with the government, which include — you know, as we said, his own lawyer described this undercover operation where he purportedly was trying to — again, the lawyer said, at his own risk, to pay people to bring in sort of imaginary — to agree to bring in people to do something illegal. And he was doing this undercover. So, we thought this was significant, because of the way the FBI is looking at him — or, at the agency — at the Proud Boys now.

You mentioned his criminal case. He was arrested on January 4, 2021, just days before January 6th, when everybody knew something was going to happen. People thought there was going to be a large rally at the time. That’s what the public was told. He was arrested. And later, the FBI said his arrest was sort of part of an effort to preempt anything that might have happened. We don’t know exactly what they mean, but that’s what they said. As you said, he was arrested on really a misdemeanor charge of burning this Black Lives Matter banner. He had admitted to that on social media. He said he knew he was going to be arrested in D.C. Yet he did have on him — you know, according to the charging documents, he had these high-capacity magazines, which are specifically and well known to be illegal in Washington, D.C. They were magazines, rifle magazines, with Proud Boys insignia on them.

NERMEEN SHAIKH: Well, the Department of Homeland Security has been warning of a heightened threat of domestic extremist violence from people angry at Trump’s election defeat and inspired by the storming of the U.S. Capitol earlier this month. What role do you think the Proud Boys played in that and the larger threat of white supremacist violence in the U.S.? What will happen to this group now under the Biden administration?

ARAM ROSTON: It’s really hard to see what will happen with them. I mean, clearly, there’s lots of groups out there. I mean, now we’ve become so familiar with these Three Percenters, the boogaloos, the Oath Keepers and, of course, the Proud Boys. What role they played in this, I don’t know. But it is clear from some of the arrests that took place over the Capitol Hill riot, that resulted in five deaths — it is clear that at least five Proud Boy members, or known Proud Boy members, were arrested. And so, they’re embroiled. They’re clearly part of that investigation.

AMY GOODMAN: And do you have any information that Enrique Tarrio is an informant today?

ARAM ROSTON: No, no, certainly no. We don’t. We do not have that information. And “informant” is a term of art, right? He was helping police in many way. But the FBI likes to sort of have a specific — sort of uses of that term for a specific relationship they have with [inaudible] forces or informers. It’s unclear — I mean, he was clearly doing many things, as we said. He was just providing information. Back then, he was providing information. He was going undercover for local police departments. But after that, we don’t know what happened. We did say in the story he told us that he had told police departments of upcoming rallies to be helpful. That is, it wasn’t sort of —

ARAM ROSTON: Ah, well, it was — we discuss that a little bit in the story, where he said he had discussed certain things with law enforcement.

AMY GOODMAN: Aram Roston, we want to thank you for being with us, investigative journalist with Reuters. We’ll link to your new piece, “Proud Boys leader was 'prolific' informer for law enforcement.”

That does it for our show. Tune in tomorrow, when we look at the new film, My Name Is Pauli Murray. I’m Amy Goodman, with Nermeen Shaikh. Remember, wearing a mask, even two, is an act of love. 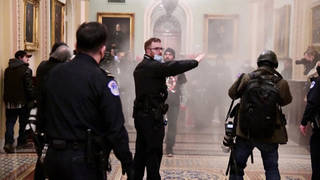