At least 28 law enforcement officers from across the United States attended the Trump rally in Washington, D.C., on January 6 that led to the attack on the U.S. Capitol, with some even boasting on social media about taking part in the riot that left five people dead. BuzzFeed News investigative reporter Albert Samaha says off-duty police officers’ involvement in the insurrection reflects a growing problem of right-wing radicalization in police ranks — a problem Black officers say has gone unaddressed by higher-ups. Samaha says that while “white supremacist ideology in law enforcement is as old as law enforcement in the U.S.” there was a marked change in tone and attitudes among police officers following the 2014 Ferguson uprising against police brutality. He says that Donald Trump’s loud support for police against claims of misconduct and systemic violence gave officers new license to express bigoted and extremist views. “The top came off, and the rhetoric suddenly became acceptable within locker rooms,” he says.

AMY GOODMAN: This is Democracy Now!, democracynow.org, The Quarantine Report. I’m Amy Goodman, in New York. Juan González is in New Jersey. We’re going to talk about police around the country right now.

BuzzFeed is reporting at least 28 off-duty law enforcement officers traveled to Washington on January 6 to support President Trump’s efforts to overturn the election. Some are believed to have stormed the Capitol in the deadly insurrection that left five people dead, including a Capitol Police officer.

This comes as the FBI says it’s vetting all 25,000 National Guard troops deploying to Washington, D.C., for Joe Biden’s inauguration over fears of an insider attack by soldiers sympathetic to President Trump. The FBI is also warning armed insurrectionists might pose in National Guard uniforms in order to launch attacks.

Talk about what you found, Albert.

ALBERT SAMAHA: Yeah, well, you know, when the Capitol was being stormed, one of the first things I did was contact a lot of my old sources in police departments and reach out to some new ones. And what I found pretty much was that a lot of cops who have been calling attention to the increasing radicalization of their colleagues were not surprised to find out that there were dozens of officers at the rally, and maybe even at the riots, because, for many years now, as they’ve tried to draw attention to their departments that some of their colleagues have expressed white supremacist beliefs, racist beliefs, have affiliated with a lot of the right-wing extremist groups, who have been at a lot of Black Lives Matter rallies to try to protect the police, departments have done nothing and have essentially ignored the fact that many of their officers, an undetermined number of their officers, have been sliding down the slippery slope of extremism.

JUAN GONZÁLEZ: And, Albert, I’m wondering if — you say the increasing radicalization, but it’s been my sense, having covered police over many years — I’m thinking back 30 years ago. Eric Adams, who is now a mayoral candidate in New York, who then was an African American police officer, repeatedly told me about white supremacist groups back then, in the early ’90s, harassing Black officers in the ranks. Is it that they become increasingly radicalized or that they are bolder in terms of making their views known to the public, and especially through social media? So many of these cops and also ex-military or military people boasted on social media of what they were doing.

ALBERT SAMAHA: That’s a really good point. And I think what a lot of officers have pointed out is for this particular generation of officers. Of course, white supremacist ideology in law enforcement is as old as law enforcement in the U.S. But for this particular generation of cops, a lot of officers I’ve spoken to said that they began to notice a change in tone, a change in the rhetoric, around the time of Ferguson, after an officer shot and killed 18-year-old Michael Brown and the Black Lives Matter protests began. That’s when a lot of officers began to notice a bit of a divide in departments, where you would have some officers who were pro-reform, who sympathize with what the racial justice protesters were calling for, and then you had another side of officers who essentially saw anyone who critiqued their police behavior as enemies of law and order.

A couple years later, as this divide remains, President Trump emerges as a sort of sounding board, as kind of the loudest voice defending police officers. And a lot of police officers, as you mentioned, it may have been that they had already been radicalized, that they already had a lot of these racist beliefs, but sort of the top came off, and the rhetoric suddenly became acceptable within locker rooms. And a lot of officers mentioned that they had colleagues who they had never really heard express any sort of political beliefs now suddenly trumpeting a lot of the rhetoric Trump said, and also being a lot more comfortable with their racist, bigoted rhetoric.

And we saw a lot of that in reporting that’s been done by a lot of news organizations over the last decade. BuzzFeed News, HuffPost, Reveal have all done stories really exposing the scope of racist postings and memes that a lot of officers have had on social media.

So, this question of to what degree these officers were already radicalized, to what degree they’ve just sort of been exposed, is a good one. And maybe to some extent it matters less than the fact that their departments, as their radicalization has been public, in social media, on those public platforms, have done very little to stop them.

AMY GOODMAN: I mean, there are just amazing stories. Here in New York, you just had, in the last week or so, NYPD’s anti-discrimination chief retiring, after it was discovered he went by the name “Clouseau” on white supremacist websites and posted things like Barack Obama is a “[Muslim] savage,” and talked about African Americans as wild beasts. It’s just an astounding story. And then, of course, the Philly transit officers who were part of the insurrection, the Virginia police, from Seattle, New York City. Do you think these officers, and do African American officers around the country, who are talking about this for years now, think they should be fired?

ALBERT SAMAHA: It’s a question that officers, even Black officers, are split on right now. Most of the officers I spoke to made clear that they do believe all of their colleagues have the right to believe what they believe politically, the right to even believe that the election was invalid, even though they know that’s false.

For many years now, police departments have cited First Amendment rights as a reason why that can’t terminate officers who have even been caught saying racist things. One story I did in 2017, there was an officer who had a tattoo that resembled a Nazi icon. And while the department was able to change their policies and say, you know, no more Nazi tattoos among cops, they weren’t able to terminate that officer, because they said it was free speech, and they hadn’t changed their policy at the time they hired him.

So, for a lot of cops, they say that maybe you can’t terminate these officers now, but what you need to do is screen these officers in the process of — at the beginning, before they even make it to the academy, and make sure the officers with extremist beliefs don’t make it to the departments in the first place.

The problem, as you suggested, you know, that NYPD officer who was in charge of screening folks held some of these extremist beliefs himself. And one of the officers in Philadelphia that The Philadelphia Inquirer reported on, a detective, who was found to have been at the rally and had posted about QAnon, the false conspiracy theory, was also part of the background-checking unit. So, the problem is, a lot of the officers who were hired to screen folks for extremist beliefs hold those beliefs themselves.

Whether officers can be terminated now for supporting the insurrection, this is the reckoning now that a lot of departments have to make. Vermont, the attorney general there so far has given the strongest statement in support of terminating officers, even if they weren’t at the Capitol, even if they didn’t break any laws, just for supporting those beliefs. He sort of said that it’s impossible to protect and serve the Constitution if you believe this false conspiracy theory about the government being illegitimate. The Oakland Police Department has taken a similar stance. But most police departments and most officers I talk to do draw the line between officers being allowed to believe what they want to believe politically, as long as they don’t cross the line into criminality.

JUAN GONZÁLEZ: And what about the issue of some of these officers joining or having ties to some of these extremist groups, like the militia groups, the Three Percenters and other white supremacist groups? Do you think police departments have done enough to be vigilant about their officers being involved with these groups?

ALBERT SAMAHA: They haven’t done enough. There was a report by a former FBI counterterrorism expert, or agent, Mike German, earlier this year that said they haven’t done enough, that there has been years and years and years of evidence of police officers joining these right-wing extremist groups, some white supremacist groups, and that their department is not doing anything about it. The FBI has called attention to this since as far back as 2006.

There was another report in 2015 that The Intercept obtained that showed that the FBI had found evidence that white supremacist groups were actively trying to infiltrate police departments.

So, while we’re able to identify police officers that have extremist views who post it on social media, we don’t know how many have extremist views who don’t post it on social media, who have been more quiet about it. But what we do know is that there’s a lot of evidence already available, and there has been for a decade now, that there are officers who are joining these groups and that these groups are specifically recruiting officers to join these organizations. And what the extent of that is, how many officers have joined these organizations, it’s really hard to say at this point.

AMY GOODMAN: Well, we want to thank you, Albert Samaha, for joining us. We’re going to link to your BuzzFeed piece, which is headlined “Some Black Officers Say Their Departments Ignored Their White Colleagues’ Radicalization.” 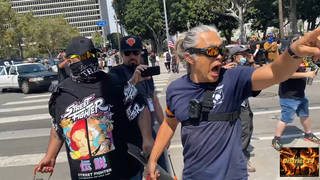 Journalist: Anti-Vaccine, Anti-Mask Protesters in L.A. Attacked Me & Ripped Off My Mask