World leaders reacted in horror over the storming of the U.S. Capitol, with the U.N. secretary-general calling on political leaders to demand their followers refrain from violence. Leaders of the U.K., New Zealand, Australia, Canada, India, Japan, France, Germany, NATO and the European Council called for a peaceful transfer of power to Joe Biden. Investigative journalist Allan Nairn looks at what steps Trump may take next, and says despite protestations from President-elect Joe Biden and others that the insurrection was “not who we are,” the U.S. has a long track record of disrupting democratic processes elsewhere. “What has shaken the U.S. population so badly, this assault on the Capitol yesterday, is really nothing by comparison to what U.S. operations have done in Latin America, in Asia, in Africa, in the Middle East, to other democratic movements and elected governments over the years,” says Nairn.

World leaders reacted in horror over the storming of the U.S. Capitol. The U.N. Secretary-General António Guterres called on U.S. political leaders to demand their followers refrain from violence. Leaders of the U.K., New Zealand, Australia, Canada, India, Japan, France, Germany, NATO and the European Council called for a peaceful transfer of power to Joe Biden.

In statement, Venezuela’s government condemned political polarization and the spiral of violence, adding, quote, “With this unfortunate episode, the United States is experiencing what it has generated in other countries with its policies of aggression.”

Allan, as we watched what happened unfold yesterday in the U.S. Congress, and the difference between what happened with this mob of white supremacists, of what many are calling domestic terrorists — the difference in how the Capitol Police, some of them taking selfies with them, dealt with them versus what we saw in Lafayette Park, what happens with Black Lives Matter activists, or just African Americans in general, your response?

The Capitol was under siege from the outside, from the crowd, but at the same time, it was also under siege intellectually from the inside. You had about a third of the Congress that was toying with the idea of abolishing presidential elections.

And Biden said, “This isn’t who we are.” But, in fact, this is consistent with a lot of deep traditions of the U.S. rulers, restricting the franchise, which the Founders always sought to do and which the U.S. right today sees as their only hope for political survival, and also the basic bipartisan U.S. principle of the current establishment that no election is sacrosanct.

Any election can be overturned, as long as it’s a foreign election. The U.S. has supported coups consistently, nonstop, through every administration. Obama and John Kerry — after the Egyptian Army staged a coup and overthrew the elected president, Kerry said they were acting to restore democracy. Trump, when he was president, along with General Kelly, his chief of staff, supported the stealing of an election in Honduras, where the candidate, Nasralla, was winning the vote count, and where, just shortly before, the U.S. had supported a coup to overthrow the elected president of Honduras, Zelaya. That was under Obama.

More recently, Trump supported a coup in Bolivia to overthrow the president, Evo Morales. And after that, Elon Musk, the second-richest man in the world, worth $184 billion, he tweeted this just on July 24th. He said, “We will coup whoever we want! Deal with it.” And I think that’s a pretty good statement of U.S. foreign policy. But now Trump, in a sense, is bringing that foreign policy home.

NERMEEN SHAIKH: And, Allan, could you talk about the response from — I mean, the widespread condemnation of what happened from leaders around the world? And, in particular, one comment that stands out is the German foreign minister, Heiko Maas, on Twitter, writing, “From inflammatory words come violent actions – on the steps of the Reichstag and now in the Capitol,” in reference to the 1933 Reichstag fire that the Nazi Party used as a pretext to seize power.

ALLAN NAIRN: Well, it’s always been the case that the U.S. establishment was willing to use terror and kill civilians overseas, either to do things like seize oil, seize political power, or basically on whim. The presidency of George W. Bush was a prime example of that.

But Trump brought a unique aspect. He had this — he has this unique ability to unleash the beast in white America, to reach into people’s souls and bring out the worst aspects. And he also has the ability to create a fascistic atmosphere. He’s a product of the American elite. He’s an oligarch himself. But he takes a different approach from the respectable presidents, who have been the soft, friendly face of ruthless American power. And in a way, I think, he is kind of exposing the American system for what it is, in many respects, through his behavior and through the way he talks. But the movement that he has incited is a unique threat. And it has to be stopped.

But at the same time, I think it would be a huge mistake for people who are anti-fascist to respond to that by embracing the establishment, embracing authoritarian measures. You know, imagine how the laws are going to be rewritten now. Imagine how security procedures are going to be rewritten now. It’s almost a guarantee that it’s going to be much harder now to hold demonstrations in Washington, D.C., and in the vicinity of the Capitol. It’s going to be harder for movements legally, for movements like the Black Lives movement, for example, to go out on the streets again. There are sure to be more restrictions. And there are sure to be more restrictions on speech, through the newly empowered corporate censors, like Facebook and Twitter and so on, and perhaps through the government itself.

I think we have to be clear-eyed, and don’t let this Trumpist movement coopt the idea of rebellion. Rebellion against injustice is a good thing. The problem is that they — and the U.S. system is indeed unjust and murderous. But they are rebelling against the aspects of the U.S. system that happen to be good: the democracy, the tolerance, the chance for a democratic space in organizing. That’s what they’re rebelling against, on behalf of evils, like racism, like madness, like blind obedience to the leader, Trump. But we have to be careful and stand against both that, but also the establishment, which is still the main power in the United States and that is now in the middle of gutting the American poor, the American working class. That has to be rebelled against, just as we resist these fascistic forces. And it’s not easy to do both at the same time, but it’s necessary.

NERMEEN SHAIKH: Allan, I mean, barring the successful invocation of the 25th Amendment, Trump is still in power for the next almost two weeks. Could you talk about some of the concerns you have about what might happen, what he might do in these 13 days?

ALLAN NAIRN: Well, one deep tradition of the American establishment, and especially the corporate press, is to rally around the flag whenever an American president launches a new war. So, if Trump wanted to and if he could get the military to go along, he could do something like bomb Iran, for example. And he, in fact, recently sent a U.S. warship toward Iran, just to be prepared for that possibility, if his whim pulls him in that direction. He had previously been calling for his law enforcement authorities to do things like arresting Biden, arresting Hillary Clinton. He wasn’t able to pull that off, but, clearly, you know, there’s still a lot — there’s still a lot he could do.

Although I have to say, what has shaken the U.S. population so badly, this assault on the Capitol yesterday, is really nothing by comparison to what U.S. operations have done in Latin America, in Asia, in Africa, in the Middle East, to other democratic movements and elected governments over the years. You know, just days before this, remember, the U.S. Congress, by an overwhelming margin, passed the defense authorization bill to pump more money toward the Pentagon and overseas special operations, and, through other measures, is backing those operations of the CIA, basically dedicated to, whenever the order comes down, being ready to go in and overthrow democracy. So, Americans are now getting a mild taste of their own medicine, in a sense.

ALLAN NAIRN: And we have to recognize that and fight against it, stop it.

AMY GOODMAN: Allan Nairn, activist and award-winning journalist,, thanks so much for joining us.

That does it for our show. I’m Amy Goodman, with Nermeen Shaikh. And remember, wearing a mask is an act of love. 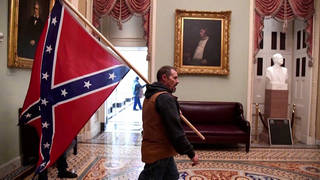