The Senate voted 57 to 43 to convict Donald Trump for inciting the January 6 insurrection, but the vote fell short of the two-thirds majority needed to find the former president guilty. Seven Republicans voted with Democrats to convict, making it the most bipartisan impeachment trial verdict ever. House impeachment managers did not include any witnesses, after Republicans threatened to prolong the trial for weeks or even months and grind other congressional business to a halt if witnesses were called to testify. Instead, a single statement by Congressmember Jaime Herrera Beutler was entered into the record before the final vote on conviction. “This was about choosing country over Donald Trump, and 43 Republican members chose Trump,” Senate Majority Leader Chuck Schumer said after the vote.

SEN. PATRICK LEAHY: The yeas are 57. The nays are 43. Two-thirds of the senators present not having voted guilty, the Senate adjudges that the respondent, Donald John Trump, former president of the United States, is not guilty as charged in the article of impeachment.

This was about choosing country over Donald Trump. And 43 Republican members chose Trump. They chose Trump. …

Even though Republican senators prevented the Senate from disqualifying Donald Trump for any office of honor, trust or profit under these United States, there is no question: Donald Trump has disqualified himself. I hope, I pray, and I believe that the American people will make sure of that.

AMY GOODMAN: While the Senate cleared Trump, he could still face criminal charges for his actions on January 6th. Republican Senate leader Mitch McConnell took to the floor after voting to acquit Donald Trump.

SEN. MITCH McCONNELL: Former President Trump’s actions preceded the riot were a disgraceful, disgraceful dereliction of duty. … There’s no question — none — that President Trump is practically and morally responsible for provoking the events of the day. No question about it. …

The people who stormed this building believed they were acting on the wishes and instructions of their president. And having that belief was a foreseeable consequence of the growing crescendo of false statements, conspiracy theories and reckless hyperbole which the defeated president kept shouting into the largest megaphone on planet Earth. …

If President Trump were still in office, I would have carefully considered whether the House managers proved their specific charge. By the strict criminal standard, the president’s speech probably was not incitement. However, however, in the context of impeachment, the Senate might have decided this was acceptable shorthand for the reckless actions that preceded the riot. But in this case, the question is moot, because former President Trump is constitutionally not eligible for conviction.

SPEAKER NANCY PELOSI: So, for Mitch McConnell, who created the situation where it could not have been heard before the 20th or even begun before the 20th in the Senate, to say all the things he said, oh my gosh, about Donald Trump and how horrible he was and is, and then say, “But the time that the House chose to bring it over” — no, we didn’t choose. You chose not to receive it.

The biggest surprise in the closing two days of the trial centered on the question of calling witnesses. On Friday night, Republican Congresswoman Herrera Beutler released a statement revealing that Republican House leader Kevin McCarthy had told her about a call he had with President Trump amidst the January 6th insurrection where Trump expressed support for the rioters. Trump reportedly told McCarthy, “Well, Kevin, I guess these people are more upset about the election than you are,” unquote. Kevin McCarthy then reportedly responded something like, “Who the F— do you think you’re talking to?”

On Saturday, the House impeachment managers called for witnesses — a move that could have prolonged the trial by weeks or even months. The Senate then voted to allow witnesses. But after Republicans threatened to call over a hundred witnesses, the impeachment managers agreed to forgo calling any if Congresswoman Beutler’s statement could be put into the record as evidence. It was. 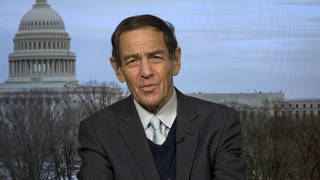