When millions of Texans lost power during extreme winter weather, some who were fortunate enough to keep the lights on now face astronomically high energy bills, with people being charged thousands of dollars for just a few days of energy use. The skyrocketing bills are a result of the state’s years-long push to deregulate its energy market, says Tyson Slocum, director of Public Citizen’s Energy Program. “We are seeing in these deregulated environments unscrupulous companies preying on their assumption that households will not understand or read the fine print,” says Slocum. We also speak with Texas resident Akilah Scott-Amos, who saw her electricity bill jump to over $11,000 during the storm. “I have no problems with paying my fair share. But this is not fair,” says Scott-Amos.

While millions of Texans lost power last week, some of those who were fortunate to keep their lights on are now facing a shocking surprise: astronomically high energy bills. Some have been charged up to $16,000 for just a few days of energy use. On Sunday, Governor Abbott ordered a moratorium on disconnecting power to customers who cannot pay these bills. The skyrocketing bills are a result of the state’s move to radically deregulate the energy grid. Some consumers purchase electricity plans with rates that fluctuate with the market.

We’re joined now by two guests. First, we go to Akilah Scott-Amos, who is a Texas resident who saw her electricity bill jump over $11,000 during the storm. Akilah, tell us what happened.

AKILAH SCOTT-AMOS: Hi. Thank you, guys, for having me.

So, I woke up on Sunday to various debits being taken out of my account in $100 increments, because that’s what I have it set at. And when I went on the Facebook page — I’m with Griddy energy, and they are very active on Facebook. So, when I went on there, they were telling everyone to switch providers immediately.

So, the first thing that I did, actually, was give them a call, because I didn’t understand why my bill was negative-$456. And they told me that the price of energy is going up and that I had two options. The first option, of course, was to switch. And the second option was to just turn my power off totally and go to a hotel.

Option one — of course, I did call. I called around to several energy companies. And they were either not taking new clients or the switch date couldn’t happen until the 22nd. So, I really had no choice there. I did sign up for the 22nd, but there was nothing else I could do. As far as actually turning the power off at our home and going to a hotel, that absolutely was not an option. Leaving our home unprotected, that just wasn’t going to work. We also have a very big dog. I have two children getting over a cold. We are still in a pandemic. So, leaving the house just wasn’t an option.

As the days went on, my bill got higher. The next day, it was $2,500. The next day, it was the same amount. We pulled back on our energy use. We don’t use that much anyway, to begin with. So, yeah, we weren’t using lights. Our heat is gas, but, of course, it uses electricity to blow. We had our electricity on 62 through the house. We used our gas fireplace. And, of course, we used the internet and to keep our phones and tablets charged. But other than that, we decreased our use significantly. But I saw a big jump in our kilowatt usage, which definitely isn’t accurate. And again, I got his with $2,500 a day. And so now my bill is a little over $11,000.

JUAN GONZÁLEZ: We’re also joined by Tyson Slocum of Public Citizen. Tyson, could you tell us, this whole issue of deregulation, what’s happened in Texas and these sky-high bills, what’s your take on it?

TYSON SLOCUM: Yeah, it’s totally unacceptable. And while clearly some individual energy companies bear responsibility, ultimately it’s state officials and regulators who just did a terrible job allowing these types of predatory utility pricing plans to be even offered to residential households in the first place.

And in Texas — and Texas isn’t alone here — we’ve had a huge, radical shift in the oversight of electricity markets away from regulatory protections to protect people and ensure reliability, and, instead, a reliance on market forces. And Texas is the clearest case of this, where instead of enforcing mandatory reliability standards for owners of power plants, Texas instead relies on huge price increases to incentivize power generators to deliver electricity even during perilous times like winter ice storms.

And so, what we saw was, as prices spiked to $9,000 a megawatt hour, which is just astronomical — a typical price could be around $20 a megawatt hour — there were thousands of Texans that signed up for retail rate programs that were directly tethered to the wholesale price. And during most times, when power prices are normal, many of these customers saw some bill savings. And that’s the way that the companies market it, these plans to households. But then, of course, when prices spiked, these companies simply passed on those extremely high prices on to their customers.

And so, the real question here is: What on Earth were regulators thinking in allowing households to sign up for these types of predatory plans? We’ve seen this with credit cards and with payday lenders and with home mortgages. Energy is the same type of thing, where we are seeing, in these deregulated environments, unscrupulous companies preying on their assumption that households will not understand or read the fine print. And it’s unreasonable to expect people to understand what’s going to be happening with wholesale prices. Sophisticated Wall Street energy traders wouldn’t even sign up their own families for this type of plan, because they understand the risk. So, I think, first and foremost, as we move forward to try to understand how all this happened, the first thing that Texas needs to do is to ban these types of predatory practices, so that households are not exposed to these high prices.

JUAN GONZÁLEZ: And I —

TYSON SLOCUM: I think the second thing we need to do — yeah.

JUAN GONZÁLEZ: Tyson, if I can, I just want to bring Akilah Scott-Amos into the conversation again. Akilah, what did you know about the ways that these prices could go up, and this whole system of them taking money out of your accounts, not at the end of the month, but apparently on a rolling basis?

AKILAH SCOTT-AMOS: Right. You know, I understood how a wholesale scenario works, and I understand that it works well in a stable market. And the market here has been stable, because, you know, they’re in charge. And so, they should definitely have some type of stop trigger, stop loss trigger, in there, the same way that they do with anything else, so that — for short time, so that we don’t get hit on the short end of the stick. It’s just not right. They failed. They failed.

AMY GOODMAN: [inaudible] Does this mean you won’t have to pay, or they’re just putting off your payment? They won’t cut off your electricity or your energy?

AMY GOODMAN: Well, Akilah Scott-Amos, we want to thank you for being with us. We would have said you were one of the lucky Texans who didn’t lose electricity, but instead your electricity bill jumped almost $5,000 overnight. And, Tyson Slocum, director of Public Citizen’s Energy Program, thanks so much for being with us.

When we come back, we look at what happened in Texas’s prisons and jails. Stay with us. 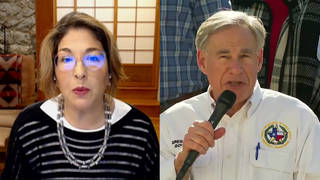