Danny Glover on Amazon Union Drive, the Power of Organized Labor & Centuries of Resistance in Haiti

As workers in Bessemer, Alabama, continue to vote on whether to establish the first unionized Amazon warehouse in the United States, we speak with actor and activist Danny Glover, who recently joined organizers on the ground to push for a yes vote. “This election is a statement,” says Glover, one of the most high-profile supporters of the closely watched union drive. Nearly 6,000 workers, most of them Black, have until March 29 to return their ballots. If workers successfully unionize, it could be a watershed moment for the U.S. labor movement, setting off a wave of union drives at Amazon facilities across the country. “Once unions are there, once workers have representation on all levels, once they have a seat at the bargaining table, it’s another kind of expression and a new relationship,” says Glover.

StoryApr 12, 2021“We Need to Give the Workers a Fair Shot”: Jane McAlevey on What Went Wrong in Amazon Union Vote

Senator Bernie Sanders is heading to Bessemer, Alabama, today to show support for Amazon workers who are in the final days of voting on whether to join the Retail, Wholesale and Department Store Union and become the first unionized Amazon warehouse in the United States. It’s one of the most closely watched union elections in decades. Voting ends Monday, March 29th. Ballots have been sent to nearly 6,000 workers, most of whom are Black.

Amazon, which has 1.3 million employees, has fought unionization for years. Meanwhile, the company’s founder and CEO, Jeff Bezos, has become one of the world’s two richest men. His personal wealth has increased by $65 billion during the pandemic alone.

Senator Sanders joins other lawmakers who have traveled to Bessemer to support the unionization drive. New York Congressmember Jamaal Bowman visited last month and called on Amazon executives to come out and talk to their critics.

REP. JAMAAL BOWMAN: And you came out here, as well. So, come out here, meet us, say hello, explain your situation, and we can take it from there. Treat your workers with dignity and respect. And if they want to organize and unionize, let them do that, because this is America. This is a democracy. It’s rooted in labor. Labor built this country. You would not have a company if labor was not working, doing the work for you. So, come out here and show yourself and be a real person, and let’s have a real, direct conversation.

AMY GOODMAN: One of the most high-profile supporters of the Amazon unionization drive is the world-renowned actor, director, activist, longtime labor supporter, Danny Glover. He’s heading back to Bessemer, Alabama, today.

Danny, welcome back to Democracy Now! It’s great to have you with us. Can you talk about why you’re taking this long journey, as you are shooting in Canada, but you’re going south?

DANNY GLOVER: Well, first of all, I was just thinking about Georgia. This is where we need Nina Simone. Her Mississippi song was galvanizing [inaudible], and words for Georgia would be galvanizing, as well. My family, my mother, my roots are in Georgia. My great-grandmother, Mae Hunley, was freed by the emancipation in the Civil War, so I have a long history with Georgia.

And I commend all those who struggle. I mean this new generation of activists, of political politicians, that are there right now and fighting, and also citizens, as well, because this is going to take the work of citizens and citizens to act at this particular moment.

We talk about labor. I’ve been a strong supporter of labor my entire life. I grew up in the system of organized labor and organizing citizens with the postal employees, which my parents were proud members of the union there, the national council — the national postal employee union. So, I know about that. That has been the circumference of my life.

So, we’re living in this particular moment at this time, and certainly unions are going to play an extraordinary role. We know the role that unions have played throughout the 20th century, particularly the mid-20th century and through the end of World War II. But we understand that the role that labor has to play is essential.

So, here we are right now at this particular moment. And it’s going to be tough. We know that. It’s always been tough. But at the same time, I think the political will is there in ways that I think are necessary and still will translate into other struggles, as well.

AMY GOODMAN: So, Danny, you’ve been to Bessemer before, and you went down, and you talked to the workers. What did they tell you about the conditions in the factory? And also, in light of what we just said at the beginning of this segment, that Jeff Bezos, one of the two wealthiest men in the world, made $65 billion during the pandemic alone — that’s like $7.4 million every hour for the past year. Put those two together.

The stories of the workers there that I met in Bessemer at that plant were horrific, you know, from the surveillance, the constant surveillance, the inability to meet whatever the demands are, the different ways of management that are desocializing, the whole process of working and desocializing them as human beings, all those, at every level, from using the bathroom. It was unbelievable for me, you know.

And I hate to draw different other conclusions about comparisons, but if this is an example of the kind of way we deal with human beings here in the 21st century, given the extraordinary information that we have, during supposedly the extraordinary evolution that we’ve had as human beings, then we’re in trouble. And if we talk about this right here, with one of the largest employers in the world, who deals with unions in other places, would not deal with unions in here, then we’re talking about something different. We’re talking about something dangerous, you know.

And I think this is something that has to happen. It’s something — it’s the work that has to happen. It’s not only in Bessemer, but everywhere around the country. All of us should be in outrage at what is happening in the workplace, that we know now exists in the workplace, and the attempts, ugly attempts, to decredit unions itself, to union bust, to pay enormous amount of money to bring specific companies in, in order to dissuade people and intimidate people from voting yes on this for union.

AMY GOODMAN: I wanted to ask you about one other issue, before we turn to a third one, that is deeply close to your heart, that you’ve been very active on, this unprecedented reparations law that has been passed in Evanston, Illinois. But I know how close to your heart Haiti is. I traveled with you. We were in South Africa and went on the plane with President Aristide when he returned to Haiti.

Well, President Biden has now deported more Haitians over the past two months than President Trump did in the previous year, even though the Biden administration admits Haitians may face harm after being deported. And you know Haiti is in the midst of a political and economic crisis. At least 1,300 Haitians, including hundreds of children and infants, have been deported since February 1st, the last deportation just on Wednesday alone. Your thoughts on — what the media tends not to do is talk about the conditions, over the years, that have led people from the Northern Triangle, from Honduras, Guatemala and El Salvador, and Haiti to come to the United States.

DANNY GLOVER: Oh boy. I mean, Haiti. I mean, most people, at some point, thought I was of Haitian descent. And I express, as Frederick Douglass did, I’m a Haitian at heart. And it’s a difficult situation. I remember Jonathan Demme and I writing letters when President Bill Clinton was in office, and just expressing our condemnation of what was happening, people who were fleeing Haiti at the political — the political murder and acts and violence that was happening at that particular point in time. And what did we do? We put them on Guantánamo Bay.

But the whole question with Haiti — and let me — I don’t want to be long-winded about it, because the whole question would be — Haiti begins at the beginning. The beginning was 1804. So, if you see — look at Haitian history, Haitian history from that particular point, whose hand was always there to impede any kind of progress for the Haitian people, whether it was impose artificial embargo over 60 years for Haiti, after his victory in 1864 — 1804, until after the emancipation, when the embargo, that so-called embargo, was lifted? From every point, from the point of time of coups d’états, from the earthquake, from the coup d’état of a freely elected president in 1989, Bertrand Aristide, from that on, for the continuous messing in Haitian politics, it is exactly that, from the denial of any kind of political expression within people.

AMY GOODMAN: Well, Danny, we’re going to have to leave it there for now. And, of course, from 1804, the founding of this republic in an uprising of enslaved people, the U.S. Congress wouldn’t recognize the republic for decades, because they were afraid it would inspire enslaved people in the United States to rise up. But we’re going to leave it there, because we want to keep you on, go to break and then talk about this historic moment in Evanston, Illinois. We’re talking to the actor and activist Danny Glover, who’s on his way to Bessemer, Alabama. Stay with us. 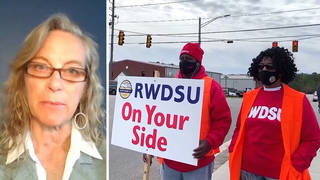 “We Need to Give the Workers a Fair Shot”: Jane McAlevey on What Went Wrong in Amazon Union Vote