AMY GOODMAN: Before we go, Kate Brown, I wanted to ask you about the significance of this week. It’s the first week of the Derek Chauvin trial, accused of murdering Floyd, George, charged of murdering George Floyd. Protesters in Portland took to the streets for more than three straight months following his death. And in response to the protests last year, Donald Trump tweeted, “Anarchists, Agitators or Protesters who vandalize or damage our Federal Courthouse in Portland, or any Federal Buildings in any of our Cities or States, will be prosecuted under our recently re-enacted Statues & Monuments Act. MINIMUM TEN YEARS IN PRISON. Don’t do it!” he tweeted. Contrast this response to how he and the Republicans have responded to the insurrectionists in the Capitol on January 6th.

GOV. KATE BROWN: Well, shame on him. It is appalling, the hypocrisy, the corruption and, of course, the chaos of the Trump administration. In Oregon, we support the right of folks to peacefully protest. And honestly, given what is happening in legislatures across the country, we have to use every tool we can to hold legislators accountable. I also am working with my local elected officials to make sure that folks who do not protest peacefully, who commit arson or property damage, are held accountable, as well. Shame on Donald Trump.

AMY GOODMAN: This past summer in Portland, Oregon, a hundred-day protest that we saw against the racism and police brutality, that culminated in a death squad-style assassination by U.S. marshals of the anti-fascist activist Michael Reinoehl, can you talk about this?

GOV. KATE BROWN: Absolutely. The actions of the Trump administration were abysmal and absolutely abhorrent in this state. And we worked with our local law enforcement to eradicate these forces from our state. We want to make sure that Oregonians can continue to peacefully protest, to uphold those voices that ask for change. And we will continue to support those efforts to eradicate racism from our institutions, from our structures and from our systems.

AMY GOODMAN: And do you condemn that death squad-style assassination of this man? And have you called for an investigation?

GOV. KATE BROWN: Look, what happened last summer was abhorrent. We are continuing to work to hold federal officials accountable. I expect you will see changes in leadership of local federal officials here in the state of Oregon. That is appropriate. And we are glad to be rid of Donald Trump’s corruption, chaos and, frankly, incompetent governance.

AMY GOODMAN: Well, Kate Brown, I want to thank you for being with us, governor of Oregon, national chair of Vote from Home.

When we come back, we look at the political and pandemic crisis in Brazil. We’ll speak with Celso Amorim, who served as Brazil’s foreign minister under Luiz Inácio Lula da Silva. Stay with us. 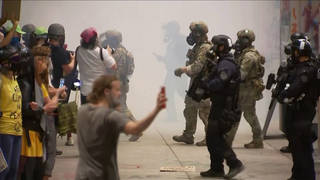