The award-winning documentary “Fly So Far” looks at the criminalization of abortion in El Salvador through the incredible story of Teodora Vásquez, a woman who in 2008 was sentenced to 30 years in prison after she had a stillbirth at nine months pregnant. Vásquez was released in 2018 after more than a decade behind bars. El Salvador has enforced a total ban on abortions since 1998, and dozens of people have been convicted and imprisoned after having miscarriages, stillbirths and other obstetric emergencies in the Central American country. The film highlights the stories of women convicted of aggravated homicide for having a miscarriage or an obstetric emergency, as well as the ongoing resistance of women and the LGBTQ+ community in El Salvador. Filmmaker Celina Escher, director of “Fly So Far,” says women and girls in El Salvador face high rates of violence, rape and femicide, as well as hostility from the right-wing government. “Women have to live this violence every day,” she says.

AMY GOODMAN: This is Democracy Now!, democracynow.org. We end today’s show in El Salvador, where reproductive justice advocates continue to fight for reproductive health and abortion access. Last month, a woman serving a 30-year prison sentence, accused of having an abortion, was released after nearly a decade behind bars. Sara Rogel was arrested in 2012 after she went to the hospital with bleeding injuries she said she sustained after a fall. She was prosecuted, sentenced for terminating her pregnancy. El Salvador has had a total ban on abortion since 1998. Dozens have been convicted and imprisoned after having miscarriages, stillbirths and other obstetric emergencies.

The award-winning documentary Fly So Far looks at the criminalization of abortion in El Salvador through the incredible story of Teodora Vásquez, a woman who in 2007 was sentenced to 30 years in prison after her baby was born dead. It was a stillbirth at nine months. Vásquez was released in 2018 after over a decade behind bars. The film also highlights similar stories of other women. This is the trailer.

REPORTER 1: [translated] What do you ask the judges now?

TEODORA VÁSQUEZ: [translated] To give me my freedom back.

ANNOUNCEMENT: [translated] Abortion is a crime. Thanks to our Constitution, El Salvador does not allow abortion in any case.

TEODORA VÁSQUEZ: [translated] First they said it was an abortion, and then they changed it from abortion to aggravated homicide. They sentenced me to 30 years.

VÍCTOR HUGO MATA TOBAR: [translated] I believe that the judges didn’t even read the autopsy. It’s pure speculation with no basis in the facts of the case or the science.

REPORTER 2: In El Salvador, abortion is prohibited in all cases.

REPORTER 3: It’s a country that has some of the world’s strictest abortion laws.

TEODORA VÁSQUEZ: [translated] I never thought that I, Teodora Vásquez, would end up in prison. Never.

AMY GOODMAN: The trailer for the award-winning documentary Fly So Far, which recently premiered in France, where our guest is now. But first we’re going to go to another clip of the film, a clip of Teodora Vásquez speaking about the night in 2007 when she had her stillbirth.

TEODORA VÁSQUEZ: [translated] I was already nine months pregnant. I was working in San Salvador’s city center. I couldn’t stand the pain anymore, so I started making phone calls. “My baby is about to be born,” I said. “I can’t stand the pain anymore. Come help me.” The police said that they were coming, but they didn’t arrive. My baby had to be born there. I fainted.

AMY GOODMAN: A clip from Fly So Far. For more, we’re joined by the film’s director, Celina Escher, a Salvadoran-Swiss filmmaker and feminist activist.

Welcome to Democracy Now! It’s great to have you with us, Celina. It is a devastating film. So, explain what happens next. She’s preparing for the birth of her baby, and then she is alone. The police don’t come when she calls them. And she has a stillbirth; the baby dies. She almost does, too.

CELINA ESCHER: Hi, Amy. Thank you very much for having me.

Yes, what happened to Teodora is that she was criminalized in the moment she gave birth. The police arrived at the place, and they took her to the police station. They had her handcuffed there for around eight hours. She was bleeding, and she died almost in the police. So, there, many human rights violations happened to her. And then, in the trial, the judges change identification of the crime: First they take her because of an abortion, but then they change identification of the crime, and they give her 30 years for aggravated homicide.

AMY GOODMAN: Actually, I would like to go to another clip from the film. It is just so powerful. And this, Teodora has returned to court to appeal her conviction of aggravated homicide and the 30-year sentence.

REPORTER: [translated] What message would you send to the world and to those countries that have not yet decriminalized abortion?

TEODORA VÁSQUEZ: [translated] My message would be to revise well all the files of each of the women who are prosecuted for a similar crime to mine. We did not commit these crimes, and we need to regain our freedom, because it’s our right. It’s our right to freedom. They have violated our freedom, not only mine, but of many women whom the Salvadoran state has not supported. It has discriminated us, as women. But we continue the struggle. We have the strength and the courage to keep fighting. I know that we are going to achieve many things. Just as I am here now, my fellow women in prison will be here soon.

AMY GOODMAN: So, here she is arguing for the appeal of her own case, but she represents “Las 17,” “The 17,” the 17 women in the prison. Talk about the law, the criminalization of abortion since 1998 in El Salvador, and who these women are, why she doesn’t just speak for herself, Teodora.

CELINA ESCHER: Yes, that’s right. Teodora is the spokesperson of The 17. The 17, they are similar cases. In 2009, a citizen group found these 17 cases of women who have been criminalized for having an obstetric emergency. And the similarities are that they’re women who live in poverty. They’re single mothers, women who live in the countryside, and they don’t have access to education or to medical access.

So, when they changed the abortion law, the Article 133, this law led to the total ban of abortion, and women can get 80 years of prison, and also the doctors who helped the women to get an abortion. The thing is, when the women, they seek — they have a miscarriage and they seek for help, they go to the public hospitals. The doctors call the police. They arrest the women, handcuff them to the bed. One told me that she was handcuffed to the bed by hand and foot for a week. And there is the moment when the doctors — when they criminalize her, and the police also arrest their [inaudible] —

AMY GOODMAN: So, let me go to another clip from your documentary, Fly So Far. Here, we hear from other women who were imprisoned in the same prison in San Salvador as Teodora and who were also convicted of aggravated homicide. Again, they’re known as the — well, The 17, “Las 17.”

TEODORA VÁSQUEZ: [translated] I thought I was alone. But I wasn’t the only one. When I realized we were more, I got very angry, because it means El Salvador is taking ownership of the women. Women are becoming a possession of El Salvador. They called us The 17 women. We talked and agreed that we would let them take our cases, but that the first of us to leave the prison — by whatever means, it did not matter — would be the first to denounce the situation we were living inside prison.

AMY GOODMAN: So, tell us the status of these women. What happened to Teodora? The most famous case now is Sara Rogel, who just got out. These women are serving years and years in prison. And finally, you dedicate the film to the case that’s now in the Inter-American Court, of Manuela. If you can talk about also the women who have not made it, who have died?

CELINA ESCHER: Yes, Manuela was a woman with limited resources. She lived in poverty in a rural area, and she could not read and write. And she had already two sons. She had a miscarriage because of a lymphoma cancer. She was heavily bleeding, but the doctors didn’t take care of her. They accused her of having an abortion, and they sentenced her for 30 years of prison for aggravated homicide. Manuela died in 2010 in prison because of the lymphoma cancer.

The film, Fly So Far, we dedicate — it’s an homage also to Manuela and to Beatriz, who have lost their life because of the total ban of abortion. Her case is now being held in front of the Inter-American Court, and we are waiting for the verdict. We are demanding justice for Manuela and for Beatriz. Also we’re demanding justice for all The 17 and the legalization of abortion and the freedom of all The 17 women. So we’re making a call to action on the 28th of September, if everybody can join. And the 28th of September will be the day of the decriminalization of abortion internationally. And we are making a global call to action to demand justice for Manuela and the liberation of The 17.

AMY GOODMAN: And what are the status of the demands to decriminalize abortion in El Salvador? The right-wing president, Bukele, has continually expressed his opposition to abortion.

CELINA ESCHER: Well, there was a proposal to change the abortion law, to make a reform to legalize abortion in four cases. But now with this extreme right-wing government, they have sent to archive the proposal. So now it’s really a difficult situation for women and girls in our country, that it’s every day women and girls get violated and raped, and we also suffer lots of violence. We have a really high femicide rate. They have found, two months ago, 52 bodies in a house of an ex-policeman in Chalchuapa. So we are also in a really difficult situation. Women have to live this violence every day. And also, girls who have been raped, they commit suicide because they don’t find any alternative what to do. So, we —

AMY GOODMAN: We have 10 seconds. How can people see this film?

CELINA ESCHER: Well, it will be shown in a film festival in the United States. The name is rePRO Festival, and it will be online. And it’s an online festival that will be only about reproductive justice. And also —

AMY GOODMAN: We will link to it online at democracynow.org. Celina Escher, Salvadoran-Swiss filmmaker. The film is Fly So Far. I’m Amy Goodman. Thanks for joining us. 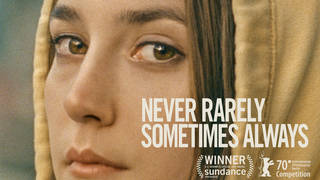