We turn now to the occupied West Bank, where the Palestinian Authority is facing intense criticism for violently cracking down on Palestinian protesters in recent weeks, following the death of the human rights activist Nizar Banat in Palestinian Authority custody. Banat was a vocal critic of the PA. He was arrested June 24th by PA forces, who broke into a relative’s house where he was staying in the town of Dura. Relatives who witnessed the attack say Banat was beaten before his arrest. Hours after his detention, he was declared dead. This is Nizar Banat’s wife, Jihan Banat, and relative, Hussein Banat.

JIHAN BANAT: [translated] Two months ago, there was a shooting toward us from unknown people. They wanted to kill Nizar, because they targeted our bedroom. For two months, he has been away from home. We didn’t see him. We heard at 3 a.m. that he was arrested. They took all his belongings and laptop. Two hours later, he was announced dead.

HUSSEIN BANAT: [translated] We were at home at 3:30 a.m. Suddenly, we heard noise of breakthrough. They broke the windows and opened the door of the room where we were sleeping. And they were from the preventative forces. When they broke in, we were sleeping, and Nizar, too. We woke up while they were beating Nizar with their metal sticks on his head.

AMY GOODMAN: Nizar Banat had run on behalf of an opposition party in the parliamentary elections that President Mahmoud Abbas would eventually call off. On Saturday, hundreds of Palestinians protested in Ramallah, calling for Abbas to step down. This comes as the Israeli newspaper Ynet reported last week the Palestinian Authority is attempting to buy tear gas canisters, stun grenades and other nonlethal munitions from Israel.

For more, we go to Ramallah, where we’re joined by Mariam Barghouti, Palestinian writer. Her recent op-ed in The Washington Post is headlined “Who is the Palestinian Authority protecting? Not us.”

OK, why don’t you lay out who is the Palestinian Authority, and who are they protecting, Mariam?

MARIAM BARGHOUTI: Hi. Thank you for having me, Amy.

NERMEEN SHAIKH: Mariam, you write in your piece that, quote, “The horrors, like those of Israeli crimes, are too ubiquitous to describe. The only consistency is that the violence, in all of its forms and different uniforms, sustains Israeli colonialism.” Could you explain why you think that’s the case? And also, respond to the argument by the Palestinian Authority that their fear is centered around Hamas.

NERMEEN SHAIKH: Mariam, could you explain who funds the Palestinian Authority and what you think needs to happen?

MARIAM BARGHOUTI: Well, the Palestinian Authority is funded from different actors and parties, namely international states within the EU, the U.S. and other actors, as well. So, we shouldn’t just confine to who is funding. The bigger focus is what is being funded.

Most of the funding is coming under the emblem of capacity building of Palestinians, but it’s really going to the security forces. This is where the money is being flooded. Every year, I just see newer police cars instead of more schools. And that’s because this is what Israel also wants. It wants us to turn into watchdogs so it can become a cheaper occupation and a cheaper colonialism on that front.

The PA is not just being funded in material value. It is being supported by tolerating the repression. We have been speaking about this for over a decade. Over a decade, Palestinians were getting beaten in the streets. Every time this happens, a little media attention comes at this, but the support and the tolerance of it continues. And now we’re being politically assassinated.

AMY GOODMAN: Can you talk, Mariam Barghouti, about just who Nizar Banat was, how he died, and why this is so significant when talking about the role of the Palestinian Authority?

MARIAM BARGHOUTI: Nizar Banat was a very vocal critic of corruption, namely the Palestinian Authority. He was attacked in Hebron by security forces, taken under the pretext of being arrested, but he was beaten so brutally that the images of his corpse were covered in purple and blue. I personally couldn’t even look at the images, so I can’t even imagine his family and close friends.

NERMEEN SHAIKH: And, Mariam, could you say — at the moment, of course, this repression is taking place in the midst of the pandemic. Could you explain what the situation is in terms of vaccination and how the Palestinian Authority has been dealing with the pandemic?

MARIAM BARGHOUTI: The Palestinian Authority initially began their response to the pandemic well — according to polling and surveying, well. And then it slowly started showing how the state of emergency was also being used to enforce new legislations, new laws that repress Palestinians, and continued to solidify the grasp that they have on our right to express, on our right to change.

And what is happening right now, not just in vaccinations, where the Palestinian Authority and Israel had an agreement to exchange Pfizer vaccines, but it turned out that the ones that Israel was going to give were actually about to expire soon — beyond that recklessness and beyond that sinister move by Israel, the pandemic is being also used to enforce new laws to repress Palestinians within a legal framework. And it is very dangerous, because if they won’t politically assassinate us, they will shove us in jails, just like Israel does with its military detention.

AMY GOODMAN: Mariam, we just have less than a minute, but I wanted to ask you both about the new government and the continued now bombing of the Gaza Strip on Saturday in what Israel’s military called retaliation for incendiary balloons launched from the besieged Palestinian territory, latest violation of the tenuous ceasefire on May 21st. Your final comments?

AMY GOODMAN: We want to thank you so much for being with us, Mariam, again. Mariam Barghouti, Palestinian writer and researcher based in Ramallah. We’ll link to her piece in The Washington Post headlined “Who is the Palestinian Authority protecting? Not us.” 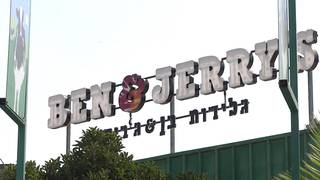