“Disaster for Me and My Children”: Afghan Doctor Describes Escape from Kabul After Taliban Takeover

Afghan doctor Wais Aria describes how he fled Afghanistan with his family after the Taliban takeover, packing up his wife and four children and trying for days to leave from the Kabul airport, where he was beaten by the Taliban. They managed to catch a flight out of the country Thursday and arrived in the U.S. on Saturday. “It was a disaster for me and my children,” says Aria, now in Alexandria, Virginia.

StoryMar 18, 2022“Who Does the West Consider Worthy of Saving?” Asks Matthieu Aikins, After Journey with Afghan Refugees

AMY GOODMAN: Coming up, we’ll talk about the almost total abortion ban that just went into effect in Texas last night midnight. But this is Democracy Now!, democracynow.org. I’m Amy Goodman, with Juan González, and we continue to look at Afghanistan as we’re joined by an Afghan doctor who fled Afghanistan last week with his four children and his wife. The family was airlifted to Doha, Qatar, after spending days trying to get into the Kabul airport. From Doha, they flew to Germany, then to the United States, arriving Saturday.

Dr. Wais Aria joins us now. He’s the founder of Tabish, a nonprofit that provides mental healthcare to traumatized Afghans. He and his family had been in Afghanistan since June visiting family. He’s joining us, finally, from his home in Alexandria, Virginia.

Doctor, welcome to Democracy Now! Can you describe your journey, how you got out of Afghanistan with your family?

DR. WAIS ARIA: Thank you so much. Thanks for having me.

So, our journey started from a normal day in Afghanistan. We never expected that very soon Kabul will capture by Taliban. And I was busy with my humanitarian work to provide services for the displacement community, which I collected some donation. Randomly, I received the news that the Taliban — that Kabul fall down and the Taliban captured. Immediately, I catch home, and I save my children, and we moved from one place to another place. Really, it was very scary for me, because I used to work with United States support projects, and I implemented money projects from USAID policy, and also somehow I provided mental health support for a contractor of U.S. military in Afghanistan. It was big concern for me. So, our family and friends advised me to move in a safe place. Then I moved to a safe place, and I left my own home in order to protect ourselves.

And then I tried to come to airport when I received this news that there is chance to evacuate the country. But I went for couple of days to airport, but I do not success. My daughter fainted in front of — in front door of the airport. And I have beaten by Taliban. And it was a lot of violence. Then it was un-attempt success. We came, very pity, home. And next day we tried. Same experience happened to us. Finally, it was very shock for me, so I couldn’t come out.

I contact the U.S. Embassy and send email. I do not receive response for couple of days. Finally, I receive an email that you should go at midnight in front of one of a secret gate of the airport, and someone will accompany you, escort you. Unfortunately, it was not the story, and I went to another gate. There was thousands, thousands people with their passport, with their travel document. But again, it was same scenario. The Taliban pushed back people. They beat. They shoot directly and indirectly on people. So, it was disaster for me. I have beaten by Taliban in front of my children, and my children screamed for that. So I spent like couple of days just over there, and we lay down in the street. We had a little bit food with us because they advised us. Just we had our clothes and shoes, not more than that. I got some water and some — a little bit food with us, but it already finished.

Finally, after two days, just it was a chance one of the Taliban soldiers said, “OK, just I allow those who has document.” Then, by chance, I entered to the gate with my four children and my wife, and we walked for 45 minutes inside of the Ministry of Interior. We have seen a lot of broken car, furnitures and many more office equipment, but there was no one inside of the ministry. And we walked like for 45 minutes to catch the last gate of airport, which there was a U.S. soldier. And they welcome us, and they give us a little bit water and check our passport. Then we enter the airport, and the bus transport us to the military terminal. Then, after the passport control, even it was not like official passport control, just they checked an ID, that a person should have an ID.

Then they sent us in front of the ramp. So, we spent almost nine to 10 hours, because — it was like very tragic for me. I don’t remember exact time, how much we spend, but it was all day that we spent in the sun, and there was no shadow, no place to protect the children. Honestly, it was disaster for us.

Finally, late night, Air Force plane come, and then we got that, and we moved to Qatar, and we spent 24 hours in Qatar, a U.S. base. Then they transport us from Qatar to Germany. And from Germany, finally, we catch Dulles, and we came to home. Totally, we almost spent five days from Kabul to U.S. But it was disaster for me and for my children.

JUAN GONZÁLEZ: And, Dr. Aria, I wanted to ask you, in terms of the fall of the Afghan government, that came so rapidly — you had flown into the country in June. Were you shocked and surprised by the — not only by the way that the Taliban overran most of the country, but also the fact that the government leaders fled and left the people to fend for themselves?

DR. WAIS ARIA: I think the government and its structure was not very stable for people. Inside of the government, people was disappointed, especially from Mr. Ghani. He had a lot of nepotism inside of his structure and system. But people never expected that in a very short time the system will fall down and everything totally change. Even Taliban never expected that the — how they will success very easily to capture Kabul.

AMY GOODMAN: Dr. Wais Aria, we reached your eldest son last night to ask him about his experience fleeing Kabul.

MUSTAFA ARIA: My name is Mustafa. I’m 13 years old, and I’m in ninth grade. We just came from Afghanistan, and we actually went through a lot of trauma. … When we were coming from internationally, I actually wanted to bring my piano, because, like, I play music and — because I was really afraid to bring it, so I just left it there. … And when the Taliban came, I was really scared to play it. And sometimes I will, like, get angry because, like, we were scared of them. The Taliban could literally do anything to us — kill us, like hurt us, seriously hurt us, and don’t allow us to leave the country. So, I was pretty much, like — I was — like, in my head, I had this picture of me getting hurt.

AMY GOODMAN: So, that’s Mustafa, Dr. Wais Aria’s 13-year-old son, who is an accomplished pianist, couldn’t bring back his piano, was so afraid. And as we wrap up, Dr. Aria, you treat traumatized Afghans. After these 20 years of the U.S. war and occupation, how do people recover?

DR. WAIS ARIA: I think, let us be optimistic, but, to be honest, there is no hope, especially for myself. I spent all my life to help people. But, you know, when I came out from Afghanistan, I came with a bunch of accumulative terror, of my children and myself. So, I was very pity. I could not talk anything about and imagine about the situation. Dr. Judy from Columbia University, she help us a lot, at least to [inaudible], and I should talk and should speak men of my country.

So, in my belief, there is no hope for the future. Taliban do not change. We already noticed what they’re doing. Unfortunately, it is reality they become more in power compared to two decades past, and they’re talking from a power of authorization at the moment. And whatever they want, they can decide it. There is no hope. Even just they talk in front of media, “OK, we will give the women’s rights, the human rights and other civil rights.” But I am not optimistic for that.

One of the example is my 13-years child. So, he could not play just a basic music in a [inaudible]. And, you know, I became aggressive on him. He wanted to play on those day which Taliban was in the country. And I put it in a safe place. How we can trust on them that they — the music is something give people calm and relax. So, we cannot listen to music.

Or the women cannot go out to work. So, at the moment, the women are at home. They are not going to their work. They are not going to university. What is the reason? There is no excuse for them to keep them at home. So they allow the men to go to work, and they already announced everyone can come to their work and resume their job. But why they do not call for women? This is one of the issues.

And they do not respect the human rights. So, we have a big independent commission of human rights. No one is working for that. In the same time, the media and democracy, journalism, all these things are collapsed at the moment. They says, “We will give the right, and we will support this, but based on the Islam entire policy or legal framework.” But what is that?

AMY GOODMAN: Well, we want to thank you so much, Dr. Wais Aria. Of course, we will continue to follow what happens. Dr. Aria, a medical doctor who just evacuated from Kabul with his four children and his wife, founder of the nonprofit Tabish, which helps marginalized communities in Afghanistan, as well as youth soldiers recovering from the psychological trauma of war.

Next up, the Supreme Court has allowed a near total ban on abortion to go into effect in Texas. Stay with us. 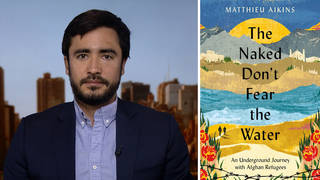 “Who Does the West Consider Worthy of Saving?” Asks Matthieu Aikins, After Journey with Afghan Refugees