Hundreds of Penn State students protesting a speaking event with Proud Boys founder Gavin McInnes on Monday night were showered with pepper spray by men who appeared to be with the hate group. Penn State, which abruptly called off the talk on Monday, had resisted earlier calls from students, faculty and community members to cancel the event, citing free speech rights. We speak with one of those students, Sam Ajah, president of the Penn State College Democrats club. “Fascism doesn’t have a place on our campus,” says Ajah, who describes being “disappointed and disgusted” by the university, which attempted to pin the violence on the peaceful protesters.

Penn State University canceled a speaking event Monday night with Gavin McInnes, founder of the far-right Proud Boys, citing the, quote, “threat of escalating violence.” Indeed, the Proud Boys have a history of violence and are under an active federal investigation for their role in the January 6th attack on the Capitol. But for weeks Penn State had cited free speech rights when it resisted calls from students, faculty and community members to cancel the event, sponsored by the student group Uncensored America, which encourages, quote, “young Americans to fight for free speech in order to make American culture free and fun again,” unquote.

Alex Stein, who the group describes as a comedian, was set to host the event. His show is called Stand Back and Stand By, a reference to Trump’s comment to the Proud Boys during a 2020 presidential debate.

When Penn State abruptly canceled the talk just before it was supposed to start Monday night, protesters still showed up and were met by Proud Boys, who maced them, along with journalists, as police looked on. Penn State officials accused the peaceful protesters of obstruction and censorship but claimed to not support McInnes and Stein’s views.

For more, we go to Penn State in College Station to speak — in, rather, State College, Pennsylvania, to speak with Sam Ajah, president of the Penn State College Democrats club, which had long called for the talk to be canceled, saying, “Fascism has no place here.”

Sam, thanks so much for being with us. Will Bunch, the Pulitzer Prize-winning Philadelphia Inquirer columnist, is still with us. Sam, talk about what happened in State College at Penn State College and why you opposed Gavin McInnes speaking Monday night.

SAM AJAH: Yeah. Good morning, everybody. Thank you for having me.

So, the event on Monday was supposed to be a scheduled “comedy night” for McInnes and Stein. And we all know or are very aware that he is the current — that he founded the Proud Boys, and he’s still actively involved with it. So, I and a bunch of other student leaders called on the university to cancel the event and simply say, “No, fascism doesn’t have a place on our campus.” But, of course, like last year, they relented and said, “No, we believe that these sentiments are bad, but due to the set of precedents from the Supreme Court, we have to have them here.” But even though in 2017, I believe, Richard Spencer was supposed to have an event here, too, but they canceled it due to threats of violence. And that’s basically where we were.

AMY GOODMAN: I mean, it’s interesting that Penn State’s president, Neeli Bendapudi, is the first woman and first person of color to be president of Penn State. So, talk about how things went down as the talk came closer on Monday and the pressure brought on the administration. And were you satisfied with its response?

SAM AJAH: Yeah, sure. So, leading up to the event, there was definitely a lot of, like, momentum and tension building up. I think Students Against — I forget the name of the organization, but a very progressive organization on campus sent out a mass email to students calling on them to go to the protest and denounce these fascist talking heads. And then the school very much was very adamant about pushing back and saying, “We have to allow them to speak there, even though we don’t agree with what they’re saying, but please come to our university-sanctioned event.” And definitely, you could feel the tension going out throughout the school back and forth as Monday came.

And as the event came — not as the event came, but when Monday came and the event started to get closer and closer, there were a lot of protesters very much there to show how much they disagreed with the whole situation. And I think, as the day turned into night, we definitely saw Proud Boys patrolling campus far away from where the event was happening. They were macing students. The police there were very much adamant about not doing anything. I know they attempted to do some crowd control with horses and state police in riot gear. And it was a very messy scene, so I can see easily why they would want to cancel that event.

And I think me and like a lot of other students were very much disappointed and disgusted with the university’s response, for pinning the response on students, even though we weren’t walking around with cans of pepper spray and spraying Proud Boys; they were doing that to the students.

AMY GOODMAN: The event was organized by the far-right student organization Uncensored America, which was founded two years ago by Sean Semanko, a radio host and field organizer for President Trump’s 2020 campaign. He attended Penn State. Talk about this group and what they represent on campus. As you said, it’s not the first time Penn State has hosted racist “alt-right” figures on campus, from Milo Yiannopoulos, the British “alt-right” —

AMY GOODMAN: — political commentator, to, as you said, after that — before that, Richard Spencer, which was canceled in 2017.

SAM AJAH: Yeah, absolutely. To my knowledge, Mr. Semanko was the chair of the Bull Moose Party back when he was a student here, so he already was very entrenched in far-right politics. And I believe he graduated in 2020, and he came back to found Uncensored America and very much wanted to keep a presence here and help expand far-right extremism on campus. So, this wouldn’t be his first performance. I definitely don’t expect it to be the last. But I think it’s very interesting and very concerning that an unaffiliated student organization was allowed to have two fascists come and speak to us twice in a row.

And I really do believe there needs to be more introspection and investigation into how these decisions are made and how people can outright lie and say, “Well, this leader of a neofascist group is definitely a good guy. He has cleaned up his act,” even though if you just bother to do a Google search, you can see he’s still very much entrenched in the atmosphere of the Proud Boys gang that he formed.

AMY GOODMAN: And finally, Sam Ajah, you’re the president of the Penn State College Democrats club. You’re an African American student. Why do you feel particularly threatened by groups like the Proud Boys?

SAM AJAH: Yeah. I see Proud Boys as an overall threat to society. But me, as a Black and bisexual young man, I view them as a threat because when I hear them talk about how they treat minoritized communities, it’s almost always with disdain and wanting to get us out from the rest of society.

As far as I’m concerned, I feel pretty comfortable coming to Penn State. I’ve met a lot of amazing communities here. And to hear that a portion of those fascists and those ideologies were going to come to my campus and start saying and espousing hateful rhetoric here was really something that filled me with a lot of anger, and a lot of other students, because the university has been trying, time and time again, to say that they support minoritized communities, but it seems like year after year they’re given a test, and they keep failing that litmus test and expect us to still have faith in them. And as a student leader, I don’t have the confidence to say I support them, nor do I believe they’re here to be on our behalf in good faith. It’s all about the optics and the PR of it all, which is really offensive, because I’m a person, not a prop, and to continue to have to witness that and go through that is not only disgusting but dehumanizing in general.

AMY GOODMAN: Well, Sam Ajah, I want to thank you so much for being with us, president of the Penn State College Democrats club, speaking to us from Penn State in State College, Pennsylvania. 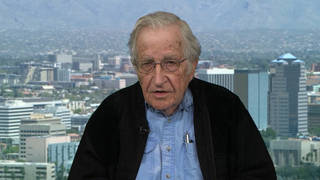 Noam Chomsky on Pittsburgh Attack: Revival of Hate Is Encouraged by Trump’s Rhetoric