“An Immense World”: Ed Yong on How Animal Senses Reveal the Hidden Realms Around Us

Ed Yong, the Pulitzer Prize-winning science writer at The Atlantic, talks about his recent book, “An Immense World: How Animal Senses Reveal the Hidden Realms Around Us.”

We end today’s show with Ed Yong, the Pulitzer Prize-winning science writer at The Atlantic magazine, who’s done extensive coverage of the pandemic. In September, he tweeted, quote, “Some personal news: I’m taking a 6-month sabbatical, starting now. These past 3 years have been the most professionally meaningful of my life, but they’ve also deeply broken me. The pandemic isn’t over, but after a long time spent staring into the sun, I need to blink.” He wrote, “I’m not giving up. But I understand that we’re in this for the long haul, and I refuse to burn out completely so soon. If I’ve learned anything from the chronic illness communities whom I cover and care about, it’s that pacing matters.”

Well, before Ed Yong took his sabbatical, Democracy Now!'s Nermeen Shaikh and I spoke to him about his book, out this year, which he started before the pandemic and passionately worked on throughout. It's titled An Immense World: How Animal Senses Reveal the Hidden Realms Around Us. I asked him what inspired him to write the book.

ED YONG: So, this book is about the incredible ways in which other animals sense the world around us. At the core of it is a concept called Umwelt, the idea that each creature has its own sensory bubble, its own particular sets of sights and sounds and textures and smells that it can perceive but that other animals might not be able to. So, my eyesight is very sharp, my fingers are very sensitive, but I can’t detect the magnetic field of the Earth in the way a turtle or a songbird can. I can’t detect ultraviolet light that bees or actually most other sighted animals can. I can’t see — I can’t detect the electric field surrounding other creatures in the way that a shark or a platypus can. Every creature has its own set of — has its own sensory world. It’s only perceiving a thin sliver of the fullness of reality. So, An Immense World is a journey through those other worlds. It’s a way of expanding our understanding of the world around us through the eyes and noses and ears of the other creatures that we share this planet with.

NERMEEN SHAIKH: Ed, if you could elaborate, what do you think the conclusions are that we should draw from the experiences that you — the observations that you make, I mean, to the extent that we can, that the experience of the world of every species, every living creature is distinct, that in the very — in the same physical space, as you say in the first few pages of the book, these creatures will see, hear, feel and smell something altogether different from humans? Now, our understanding of that has intrinsic value, you suggest. What is the effect of that understanding? And what would you like people to understand, as it were, from that understanding?

ED YONG: So, three things. First, that I think that the Unwelt concept is incredibly humbling, right? Like, our senses give us this powerful illusion that we are experiencing all there is to perceive. Our subjective experience of the world feels total. But it isn’t. That’s an illusion. We are only getting a small part of what there is to perceive.

The second thing is I think it shows the even, like, mundane and boring aspects of the world to be full of wonder and magic. You know, when I walk my dog Typo around our neighborhood, by looking at what he’s smelling, I understand that there’s so much in even the most familiar of streets that he can perceive but I can’t. And to the nose of an albatross, the supposedly featureless ocean is roiling with scented topography. To other insects, the plants around us in our parks and gardens are thrumming with vibrational songs that we can’t hear. The world is full of wonder and magic, and much of it is imperceptible to us unless we think about the senses of other animals.

And finally, I think we are harming other creatures around us by neglecting their sensory worlds. In my cover story for The Atlantic, I talk about the problems of light and noise pollution, sensory pollution, stimuli that we flooded into the world that are distracting, harming other animals around us, and that we don’t even think of as pollutants, but they are problems. By filling the night with light and the quiet with noise, we are seriously harming a lot of the other creatures around us, and we need to take that into account.

AMY GOODMAN: You conclude the book by making this passionate case to save the quiet and preserve the dark. How do you do that?

ED YONG: Actually, with remarkable simplicity. A lot of ecological problems — climate change being the most obvious examples — have a kind of runaway momentum to them. They’re very hard to address, even if we stop, say, greenhouse gas production today. But light and noise pollution go away immediately, often at the flick of a switch. They are problems that we can deal with right now. And, you know, again, as always, with a pandemic and other things, this is about policy rather than individual choices. So, we can turn off lights at night. We can slow down vehicles on roads and in the oceans, which would reduce the noise that they produce. We could change the color of LEDs and other light sources so that they are less harmful to other animals around us. There’s lots of policy measures that we can put into place, but it’s whether we have the will to do so, whether we recognize that these are problems that demand solutions.

AMY GOODMAN: One of the central ideas is the concept you write about, Umwelt, a term coined by the Estonian German zoologist Jakob von Uexküll in the early 20th century, the grandfather of the man who founded the Right Livelihood Awards, Jakob von Uexküll. What is Umwelt? Lay that out in the grandest sense.

ED YONG: So, the Unwelt is the name for this sensory bubble that I’ve been talking about. So, my Unwelt includes, say, colors from red to violet. It includes sounds within a certain frequency range. But, for example, the Unwelt of my dog includes a lot of smells that I can’t perceive. It includes a slightly higher range of pitches that I can’t hear. So, every animal has its own Unwelt, its own sensory bubble and its own little sliver of this immense world that we live in.

AMY GOODMAN: And, Ed, one last “finally”: You mentioned your dog, and many people have pets, like dogs and cats. And although you write about, of course, animals in the wild, if you could talk more deeply about your relationship with your own dog and how that changed your life?

ED YONG: Yeah. So, dogs live in a world dominated by smell. You know, I am a sighted human. My world is predominantly visual. Typo’s, my dog’s, his world is one of smell. And we’ve tried to pay attention to that throughout the entirety of his life. So, every day when we go for walks, at least once a day, he goes on a sniff walk, and that’s a walk that he controls. He has full agency about what he wants to do. And what he wants to do is to smell. He explores intently and enthusiastically the world around him, and we let him do that. The walk goes at his own pace. Usually we spend half an hour just going around one block.

But it’s good for him. I think there are a lot of studies showing that dogs are happier and more optimistic and less anxious when they get to use their noses. I think it’s a shame that a lot of dog owners yank their dogs along on walks, pulling them away from those experiences. But those experiences matter. You know, Typo explores the world through his nose. He sees new — he smells new stuff all the time. He gets social information about the dogs in his neighborhood, just like I get when I check Twitter or Instagram. You know, smelling is a vital part of his doghood. And it’s crucial then for me to respect that and to give him opportunities to use his nose.

AMY GOODMAN: As a pup parent myself, do you know what he sees?

ED YONG: Well, one thing he sees is fewer colors than I do. So, a dog’s — it’s a common myth that dogs don’t see color at all. But they do see from — but they do see colors. It’s just a limited rainbow. So, reds will look like a dark yellow to Typo. Some greens will just look like gray. A lot of purples and violets will look dark blue. So his rainbow really just goes from yellow to blue with some whites and grays in the middle.

AMY GOODMAN: That’s Ed Yong, the Pulitzer Prize-winning science writer at The Atlantic. His book, An Immense World: How Animal Senses Reveal the Hidden Realms Around Us.

And that does it for our show. I’m Amy Goodman, with Nermeen Shaikh and Zazu Goodpup. Thanks so much for joining us. 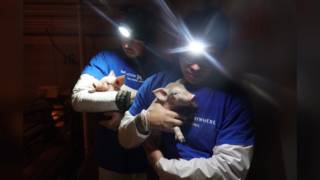