We speak with climate author, journalist and movement leader Bill McKibben upon the release of the highly anticipated U.N. Intergovernmental Panel on Climate Change 2022 report, which finds the impacts of the climate crisis are already worse than predicted, driving poverty, hunger, disease and species extinction. McKibben also speaks about how global dependency on oil and gas empowers autocrats like President Vladimir Putin and is helping fuel the Russian war in Ukraine. Renewable energy could help defeat fascism and deter some of “the worst people on Earth” if deployed at scale, he says.

AMY GOODMAN: This is Democracy Now! I’m Amy Goodman, as we turn to a highly anticipated new report from the Intergovernmental Panel on Climate Change, or IPCC, that warns the impacts of the climate crisis are already more severe than predicted, driving poverty, hunger, disease and species extinction. It found about half the world’s population — some three-and-a-half billion people — live in areas now deemed highly vulnerable to climate change. The report is part of a series by the Nobel Peace-winning IPCC that details the latest global consensus on climate science. U.N. Secretary-General António Guterres announced the report.

SECRETARY-GENERAL ANTÓNIO GUTERRES: Today’s IPCC report is an atlas of human suffering and a damning indictment of failed climate leadership. With fact upon fact, this report reveals how people and the planet are getting clobbered by climate change. Nearly half of humanity is living in the danger zone now. Many ecosystems are at the point of no return now. Unchecked carbon pollution is forcing the world’s most vulnerable on a frogmarch to destruction now. The facts are undeniable. This abdication of leadership is criminal. The world’s biggest polluters are guilty of arson on our only home.

AMY GOODMAN: For more, we’re joined by Bill McKibben, author, educator, environmentalist, co-founder of 350.org, also Third Act, which organizes people over 60 for progressive change. In his latest piece, he writes about “Heat Pumps for Peace and Freedom,” which we’ll talk about in a minute, as well as ”This is how we defeat Putin and other petrostate autocrats.”

But first, Bill, your response to this damning new IPCC report?

BILL McKIBBEN: Well, Amy, look, “damning” is the right word. It’s what we’ve always known, what we’ve been saying for 30 years, but it just gets clearer and clearer, and the less we do about it, the worse it gets. I will say that the secretary general of the U.N.'s words this time underscore just how shaken he is and anybody else who's paying attention. “The world’s biggest polluters are guilty of arson of our only home.” That’s not the kind of language that we would have heard even a few years ago out of the world’s top diplomat. We’re at a breaking point, and, as he makes clear, the window we have for action is now narrow and closing. There are scientists who think that it may have already closed. But this report says that we have a little, little, little bit of time to accomplish enormous things.

And that means — and this goes to this other topic that’s dominating our lives today, and rightly so — that means that when we have moments like this that throw the world into stark illumination, we have to seize them. The same fossil fuels that are destroying the planet are precisely the thing that undermine — that underwrite the power of thugs like Vladimir Putin. And we need to figure out quickly how to take that power away, before it destroys free nations, before it destroys the ecosystem of the one planet we’ve got.

AMY GOODMAN: Yes, it’s extremely significant, Bill, that this report, this doomsday report on the climate emergency, comes out in the midst of Russia’s invasion of Ukraine. So, you have these two pieces, ”Heat Pumps for Peace and Freedom,” and for The Guardian, ”How we defeat Putin and other petrostate autocrats.” “After Hitler invaded the Sudetenland, America turned its industrial prowess to building tanks, bombers and destroyers. Now, we must respond with renewables.” Talk about what exactly you mean.

BILL McKIBBEN: So, look at what’s going on right now in Russia. Sixty percent of Vladimir Putin’s export earnings come from oil and gas. If he didn’t have them, he wouldn’t be able to field an army that’s, as we speak, bombing the hell out of Kharkiv. Europe has been cowering for two decades in response to Putin’s constant provocations because it depends on his oil and gas in order to keep warm through the winter. And even now the U.S. and the EU are unable to take what would be the most devastating economic step, embargoing Putin’s oil and gas in Russia, because they fear that the price of gas will go up enough that American support for doing anything about the Ukraine will evaporate.

All of this can now be undone. Scientists and engineers in the last 10 years have figured out how to make solar power, wind power, and the batteries to store them, the cheapest power on Earth. If we deployed it at scale very fast, we would do the work that the secretary-general of the U.N. said today we must do in order to deal with climate change, and we would also undercut the power of Vladimir Putin, the power of the Koch brothers, our biggest oil and gas barons, the power of the kings and princes of Saudi Arabia, the power of a lot of the worst people on planet Earth. We can do this, but we need to concentrate. We need to make it a focus of our work in this country and around the world, the same way that prior to World War II we, in the course of a year, transformed our industrial base into churning out the things we needed to defeat fascism in the 20th century. Well, the things we need to defeat fascism right now are heat pumps, electric vehicle chargers, on and on and on down the list. It’s doable, but only if we can overcome the arsonists that the attorney general — that the secretary-general of the U.N. decried today, the arsonists being the big fossil fuel industries that, of course, are using this Ukraine moment in an effort to expand, not contract, their empire.

AMY GOODMAN: [inaudible] and the fact that Germany, after a lot of pressure, put it on hold, [Rosneft], and BP pulling out of it — I think it had 20% stake in it — as well as what hasn’t been talked as much about but Putin relies on, which is Gazprom.

BILL McKIBBEN: Exactly right. These cracks are appearing. The fact that BP decided it’s going to get rid of its 20% stake in Rosneft is fascinating. And it raises difficult questions for Exxon and Chevron, our big oil companies, which have huge stakes in Russian energy. Look, to invest like that is clearly to be complicit with Vladimir Putin and his plans, but to continue building a fossil fuel infrastructure of any kind supports him and all the other people who profit from fossil fuel. It’s a global market, and the only way to undercut it is to stop using it, which we are now perfectly capable of doing, if we go to work. We need our Department of Energy to stop playing footsie with the oil and gas industry and building new LNG terminals. We need them to be taking the lead in doing what FDR did 80 years ago, to be gearing up our industrial base to be building the energy of the present and the future, the stuff that would give us a fighting chance.

AMY GOODMAN: And, of course, in addition to Putin threatening to use nuclear weapons, you have Ukraine, a major nuclear power plant — relies on nuclear power for at least half of its energy. These plants can ultimately become kind of like bombs. Chernobyl, think of how much it destroyed. It’s one of the first things that Putin took over as the troops came in, the Chernobyl isolation site. Who knows how damaged Russian soldiers who moved through it will be? But the idea —

AMY GOODMAN: — that these places could be hit with a missile or just workers don’t go to work because they’re afraid, and one of them melts down.

BILL McKIBBEN: Yes. I do note that the German Greens this week are talking about perhaps postponing the shutdown of their nuclear power plants, because they need the energy and because it’s clean energy in carbon terms. But over time, yes, it’s a good reminder that nothing is safer than renewable energy. I mean, you could, I suppose, drive a tank across Central Europe and get out and smash each of the solar panels with a hammer, but it would take a hell of a long time.

BILL McKIBBEN: Well, OK, look, its carbon — you know, doing anything on this scale obviously produces a lot of carbon emissions. But the real problem is that it underwrites the constant efforts of the fossil fuel machine, the day-in, day-out production of fossil fuel. That’s what we have a chance here to knock off its pedestal. This is a moment that we should seize, in all seriousness, in order to take on the two huge existential plagues that face us this morning: the climate crisis, outlined in this new IPCC report, and the fact that we have a madman with nuclear weapons who’s used the revenues from oil and gas to intimidate and terrify the entire world.

AMY GOODMAN: Bill McKibben, I want to thank you for being with us, author, educator, environmentalist, co-founder of 350.org. We’ll link to your pieces. I’m Amy Goodman. Stay safe, all. 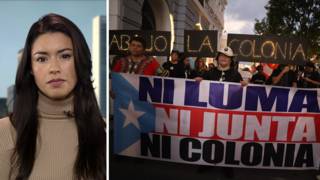