We go to Oakland, where a group of teachers are on a hunger strike to protest a plan to close and merge over a dozen schools due to under-enrollment. This comes ahead of a critical school board vote Tuesday that will decide whether to proceed with the plan. Activists argue the move threatens to divert resources to charter schools and displace hundreds of Black and Brown children from their neighborhood schools. The hunger strike across multiple different schools has empowered many to speak up against longtime systemic racism, says Moses Omolade, one of the striking workers and a community schools manager at Westlake Middle School. “The school board is attempting to close predominantly Black and Brown schools without engaging with us at all.”

We end today’s show in Oakland, California, where protests are continuing over a proposal by the Oakland Unified School District to close and merge over a dozen schools. Critics say the move would disproportionately affect Black and Latinx students in low-income areas of Oakland. Tonight the Oakland school board plans to vote on the closures, after nearly 2,000 people logged on to the Oakland Unified School District’s school board meeting to give public comment about the closures, including parents, teachers and students.

We’re joined now by Moses Omolade. He is a community schools manager at Westlake Middle School in Oakland, part of a group of educators on hunger strike protesting the proposed school closures.

Thank you so much for joining us. I am sure you are weak. This is day eight of the strike. You began on the first day of Black History Month. First, how are you feeling? And why are you doing this?

How am I feeling? I’m feeling charged by my community. I’m feeling, obviously, weak in the body, but the spirit is strong. I’m feeling leveraged to push back against systemic racism that’s happening in our communities.

Why we’re doing this is just very straightforward and clear. Systemic racism has run rampant in our communities for far too long, and this is another one of those times. To have community hubs in our neighborhoods be shut down without — or attempted to be shut down without community engagement is just not something that we’re going to stand for. And that’s what’s currently happening. The school board is attempting to close predominantly Black and Brown schools without engaging us at all. So we are deciding to push back. We are deciding to make noise and to cry foul about the reasons in which they’re choosing to close our schools, because balancing the budget, especially when it’s only 2% of your budget, on Black and Brown bodies is not something that’s acceptable.

MOSES OMOLADE: Yeah, yeah. We have been excited to witness students take charge. You know, our students were upset, as you can imagine, during a global pandemic, to be sorting through mental health issues, to be struggling already, and then to be told that your school will be taken away from you, to be told that relationships will be severed, to be told that little siblings you expected to go to your school will no longer go, that you don’t have an opportunity to go to the school you desire to. They were upset. So, it was very exciting to see them charged up and willing to head into the streets to let the district know that they won’t sit silently by, to take charge and command of their own lives, which is something we’ve been constantly trying to teach them. And we are teaching young folks that you are allowed to push back on things that you feel are not right.

AMY GOODMAN: Just, Juan, to say something: You know this struggle well. You were involved in one in New Brunswick, New Jersey.

MOSES OMOLADE: Who? Me? Well, no, that was San Francisco State University.

JUAN GONZÁLEZ: Yes, yeah. That was a major school downtown that was being closed by the big hospital chain, a school that was 94% Latino, and they wanted to expand, so they just closed down the school, despite hundreds of —

JUAN GONZÁLEZ: — parents and students protesting. And this has been happening. It happened in New York City, when, under Bloomberg, 25 schools were closed.

JUAN GONZÁLEZ: It happened in Chicago under Rahm Emanuel. So it’s been a process in all these major cities now of this. What is the argument that the Oakland school board says why they have to close these schools?

MOSES OMOLADE: It’s a laughable one, and one that I was really glad to witness. They proposed it at the board meeting. They were on full display and showed these magic numbers and gave reasons that were antiquated as to why they want to close our schools, which were that our schools are under-enrolled. And as we know, and they don’t speak about, is that a lot of our students are going to the charter schools, that they’ve allowed to be here. But also, gentrification is impacting our communities. But small schools is something that all affluent neighborhoods aspire to have. So why do we not desire — why do we not deserve small schools?

Another reason was to save money for them, which is about $14 million, which only equates to about 2% of their budget. They have many other options they can choose as to how to save this money versus using Black and Brown bodies and taking away community hubs that have been in our communities for over 150 years, at the stroke of a pen or at the click of a Zoom button.

AMY GOODMAN: Moses Omolade, the vote is tonight. I mean, it is astounding that 2,000 people logged in to the school board meeting. What exactly is being voted on? Just simply whether the schools will close?

MOSES OMOLADE: They’re voting on school closure and mergers. And what that means is they’ve chosen that certain schools they would like to merge and put them together, and then, the year after that, they’ll dissolve and become one school. So that will be voted on tonight. And chances are — we are very clear that what they’re going to do is the divide-and-conquer tactic, which they’ve used for a long time: take some schools off that list, so those schools will quiet down and allow the others to close.

But right now we’re not stopping. This movement is no school closures at all and no mergers at all. So, San-Chez and I will be on this until they decide to inject some humanity into the process by which they choose to close schools and engage with our community about these choices.

JUAN GONZÁLEZ: And what’s your assessment of the political leadership of Oakland in the face of this? Are they 100% behind this, or can they be moved to pressure the school board?

MOSES OMOLADE: They can be moved. I mean, I think anyone can be moved. We’re humans at the end of the day, you know? It’s been laughable, their approach so far. They have not come out to see us. Gavin Newsom hasn’t come out to see us. And we’ve demanded that many times over. We’ve asked Tony Thurmond to come out. We’ve asked the board to come and speak with us. The mayor has come out and said, “Yes, they deserve to close these schools” — Mayor Libby Schaaf — and has yet to actually provide proper reasoning. We have no numbers. Anyone looking at these numbers would kind of laugh at it. So, leadership in Oakland, in the state of California have been laughable so far, but we have open hearts and love and desire to meet and sit with them and break bread with them, ideally, someday and talk about the reasons why our communities need to stay open.

AMY GOODMAN: We want to thank you so much for being with us, and we’ll report tomorrow on what happens in the school board vote tonight, which I believe is 6:00 Pacific time, 9:00 our time on the East Coast. Moses Omolade is a community schools manager at Westlake Middle School, part of a group of educators on a hunger strike protesting the Oakland Unified School District’s proposal to close or merge over a dozen schools. This is day eight of the strike. I’m Amy Goodman, with Juan González. Stay safe. Wear a mask. 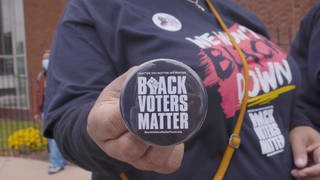