With NATO countries recommitting themselves to the alliance and passing sweeping sanctions against Russia as punishment for Vladimir Putin’s invasion of Ukraine, is this the dawn of a new Cold War? We speak with foreign policy expert William Hartung, a senior research fellow at the Quincy Institute, who warns that hawks in Washington are pushing for a massive increase in the U.S. military budget, which is already a record-high $800 billion a year. “There’s a danger that not only will this be a war in Ukraine, but the U.S. will use it as an excuse for a more aggressive policy around the world, arguing that it’s to counter Russia or China or Iran, or whoever the enemy of the moment is.” Hartung also speaks about the Saudi-led war in Yemen, where U.S. support has allowed the conflict to rage for years, killing about 400,000 people. Unlike in Ukraine, where the U.S. has more limited leverage, the Biden administration could “end that killing tomorrow,” Hartung says.

AMY GOODMAN: This is Democracy Now! I’m Amy Goodman. As we continue to look at the global fallout from Russia’s invasion of Ukraine, we’re joined by William Hartung of the Quincy Institute, who closely follows the global arms industry and the U.S. military budget. He has just co-written an article for TomDispatch headlined “Washington Should Think Twice Before Launching a New Cold War.”

Bill, welcome back to Democracy Now! Why don’t you take it from there? What is your assessment of what’s happening right now, and who most is profiting?

WILLIAM HARTUNG: Well, the hawks in Washington want to jack up the military budget and use Ukraine as an excuse. But if you look at the budget — and Biden is going to propose, according to press accounts, a military budget of over $800 billion on Monday. That’s more than was spent at the height of the Korean or Vietnam Wars. It’s $100 billion more than what was spent at the height of the Cold War under Ronald Reagan. So, this notion that to provide some weapons to Ukraine, to send a few thousand additional troops to Europe requires increasing this enormous budget is only going to benefit weapons contractors and members of Congress who receive campaign contributions from them, who use the arguments to get themselves elected.

So, you know, and then, overarching all this is this discussion of a new Cold War. And I think people don’t think about this — a lot of people think it’s like the United States spent the Soviet Union into the grave and brought democracy to Eastern Europe and so forth, but they don’t look at what happened all over the world in the name of fighting communism. They don’t look at the Vietnam War. They don’t look at the coups in Guatemala, Iran, Chile. They don’t look at arming of the so-called freedom fighters by Ronald Reagan, including the Afghan mujahideen, some of whom went on to help form al-Qaeda; including the Contras in Nicaragua, who committed unspeakable crimes; including the overthrow of the Allende elected government in Chile, when Henry Kissinger said, “You can’t let a country go communist because of the irresponsibility of its own people,” acknowledging that they were overthrowing a democratic government. So I think there’s a danger that not only will this be a war in Ukraine, but the U.S. will use it as an excuse for a more aggressive policy around the world, arguing that it’s to counter Russia or China or Iran, or whoever the enemy of the moment is.

AMY GOODMAN: Bill Hartung, about the recent op-ed that you wrote for Stripes, “US should use its leverage to end the war in Yemen,” I mean, what we’re seeing, perhaps in an unprecedented way right now, is the mainstream U.S. corporate media on the ground, there with the targets of war. And it is horrifying, and the whole world is mesmerized by this, what it means to be at the target end of war. We don’t see that similarly in Yemen — hosts of global shows standing with the Yemeni people, looking up and seeing planes flying overhead. Can you talk about what it would mean, what you mean by saying the U.S. should use this leverage to end the war in Yemen?

WILLIAM HARTUNG: Yes. Well, I think, as you said, you know, the media has underscored the horrors of war by the way they’re covering Ukraine. And I think people should take that in. But they have not covered the horrors of war in Yemen. And if they did, people would understand that in the Saudi-UAE intervention there, of which today is the seventh anniversary, nearly 400,000 people have died, both through bombing, through a Saudi blockade that has kept important, necessary materials getting into the country, from bombing of hospitals, from bombing of a school bus, bombing of funerals, bombing of civilian neighborhoods.

So, the United States is key to this, because through Obama and Trump and Biden, the U.S. has supplied tens of billions of dollars of weaponry to the Saudi and UAE regimes that have been used to fuel that war. And if the United States cut off weapons and also the spare parts and maintenance that keeps the Saudi war machine running, we could end that killing tomorrow, and we could force the Saudis to negotiate in good faith for a peace agreement to end that war.

So, the contrast is stark. And, you know, in Ukraine, the United States’ leverage is more limited. It’s a complex problem. In Yemen, the people of the United States could force our government to end the killing in short order. So there’s more agency there. There’s more of an opportunity for people to make a difference. And there’s groups that have been doing so, including the Yemeni diaspora in the United States. And Representatives Peter DeFazio and Pramila Jayapal are going to bring a war powers resolution to end U.S. support for the Saudi-UAE war. So, I think this is an area where people can make a difference and where the international community for far too long has looked the other way.

AMY GOODMAN: Well, Bill Hartung, I want to thank you so much for being with us, national security and foreign policy expert at the Quincy Institute for Responsible Statecraft. We’re going to link to all of your pieces at democracynow.org.

Next up, we’ll speak to the Colombian environment activist Francia Márquez Mina, the new running mate of presidential front-runner Gustavo Petro, who could become Colombia’s first Black female vice president. Stay with us for this exclusive interview. 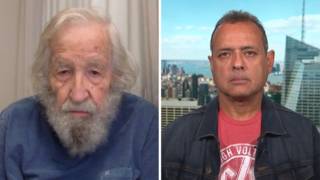