Former Russian President Dmitry Medvedev is warning Russia may deploy nuclear weapons to the Baltic region if Sweden and Finland join NATO. His comments come one day after the prime ministers of Sweden and Finland spoke together about possibly joining the military alliance — a move many thought was unthinkable before Russia invaded Ukraine. Agnes Hellström, president of the Swedish Peace and Arbitration Society, calls the NATO debate in Sweden “narrow,” saying “it’s been the only option presented to us by the media,” and calls the proposed solution a “reflex” built up from a “big amount of fear after the invasion of Ukraine.”

The former Russian President Dmitry Medvedev is warning Russia may deploy nuclear weapons in the Baltic region if Sweden and Finland join NATO. Medvedev said, quote, “There can be no more talk of any nuclear-free status for the Baltic — the balance must be restored.” His comments come one day after the prime ministers of Sweden and Finland spoke together about the nations possibly joining NATO, a move many thought unthinkable before Russia invaded Ukraine. Finland shares an 830-mile border with Russia. This is the Finnish Prime Minister Sanna Marin.

PRIME MINISTER SANNA MARIN: We have deepened our NATO partnership until now, hand in hand with Sweden, ever since Russia illegally annexed Crimea. The difference between being a partner and being a member is very clear and will remain so. There is no other way to have security guarantees than under NATO’s deterrence and common defense as guaranteed by NATO’s Article 5.

PRIME MINISTER MAGDALENA ANDERSSON: We have to analyze the situation to see what is best for Sweden’s security, for the Swedish people, in this new situation. And you shouldn’t rush into that; you should make it very seriously.

AMY GOODMAN: It is the first time there is a Swedish and Finnish prime minister both women. We go now to Sälen in western Sweden, where we’re joined Agnes Hellström, president of the Swedish Peace and Arbitration Society, the country’s oldest peace group. Some say it’s the oldest in the world, founded in 1883.

AMY GOODMAN: I mean, this is an incredible — even seeing these two women, which is historic, they are standing there, though, saying they want to join this military alliance, NATO. If you can respond?

AGNES HELLSTRÖM: Well, the Swedish Peace and Arbitration Society, we are against the Swedish membership in NATO, and that, therefore, I’m, as a feminist, extra sad at the steps we are taking so quickly now towards the membership. And the main reason that we don’t — we don’t think it would make us safer or the world more secure. It would make us part of a nuclear doctrine, and our possibility to be a voice for democracy, prevention and disarmament would decrease.

NERMEEN SHAIKH: And, Agnes, could you talk about whether, since the Russian invasion of Ukraine, popular public support for joining NATO has increased in Sweden, as it has in Finland, where reportedly recent polls suggest almost 70% of Finns support joining NATO?

AGNES HELLSTRÖM: Yeah, yeah. The recent debate in Sweden has been very narrow and pro-NATO, I would say. But the polls, they have still — that’s been made, they still don’t show support from a majority of the people of Sweden. So, I think that it has been growing, the support, but at the same time, it’s been the only option presented to us by the media, more or less. And I think it’s really important, this kind of big decision, that it has to be a wide debate, and it has to be — the people must be included in this kind of really big change in our policy.

AMY GOODMAN: Agnes Hellström, for people who aren’t familiar with Sweden’s history, if you can talk about the history of neutrality and why it is so central to Sweden’s identity?

AGNES HELLSTRÖM: Yes. I don’t remember the exact year when we decided on the neutrality policy. And it’s also been abandoned for a more nonaligned policy, military. But it’s been — well, it’s been a country that had peace for more than 200 years. And a lot to thank has been our choice to be more of a voice for democracy — diplomacy and for disarmament and to, in the international forum, represent those issues more than to take side or to choose an ally in that kind of way as NATO is.

NERMEEN SHAIKH: Agnes, as members of — both Finland and Sweden are, of course, members of the EU, which does grant some kind of protection to both states in the event of any kind of military assault. So, in other words, they do already have some security guarantees. Why then do you think that there is this heightened discussion of NATO? What would NATO membership enable?

AGNES HELLSTRÖM: Well, I think, in Sweden, as in many countries right now, it’s been a big amount of fear after the invasion of Ukraine. And therefore, it’s like the easiest — it’s the easiest solution to join a military alliance that would protect you in case of war. But at the same time, war is always devastating, so we have to do everything we can to prevent war, the war spreading or just war starting in other parts of our surroundings. So, I think it’s a reflex that you choose that because it’s the easiest way. But at the same time, we have to use this really wide pallet of choices right now or to solutions to try to get a ceasefire and try to deescalate this conflict. And that’s why I think this analysis that Sweden is going to make, it has to take a lot of time. It’s been being discussed for years in Sweden. And it’s been a majority of the parties of the government — the parliament have been opposed to NATO membership — well, until recently.

AMY GOODMAN: Agnes, it would take minimally a year for Sweden or Finland to be admitted to NATO, if things go as they have in the past, which certainly isn’t happening these days. What do you fear might happen in the interim? And what kind of organizing is going on right now in Sweden in the peace movement? And also, for people to understand, if they think of Sweden, this peaceful nation, it is significant that, you know, here you have the Nobel Peace Prize that started in Sweden, but it is one of the largest per capita exporters of weapons in the world.

AGNES HELLSTRÖM: Yeah, that’s true. And my biggest fear right now is not what would happen if we joined; it would be that we joined. I think it would be a really bad decision, and it should definitely not be made now in this really tense time. I think it would be much better for Sweden not to join. And also, as you said, we are a big arms producer, and we’re also supplying the parties of the war in Yemen with a lot of arms at the moment. So, yeah, the image you have of Sweden is not always what you expected.

AMY GOODMAN: Well, Agnes Hellström, we want to thank you for being with us — we’ll certainly continue to follow this story — president of the Swedish Peace and Arbitration Society, speaking to us from Sweden.

Next up, we go to Lviv, Ukraine, to look at how Russia’s invasion has displaced more than 11 million people, including two-thirds of Ukraine’s children. Stay with us. 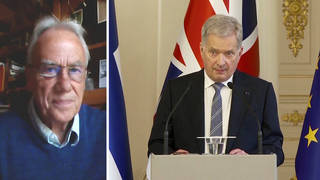