President Biden announced Tuesday he would extend the pandemic pause on federal student loan payments until August 31, but debtors are demanding total cancellation. We speak with Astra Taylor, co-director of the Debt Collective, who discusses the implications of the latest extension, economically and politically. Taylor says Biden should stop letting loan servicers profiteer from borrowers and cancel student loans, which would immediately narrow the racial wealth gap.

StoryDec 09, 2021“Your Debt Is Someone Else’s Asset”: Calls Mount to Cancel Debt & Halt Wealth Transfer to the Rich

Facing mounting pressure, President Biden has extended the pandemic pause on federal student loan repayments through August 31st, after the relief was due to expire in May. He made the announcement in a video message Wednesday.

PRESIDENT JOE BIDEN: [Today I’m announcing my] administration is extending the pause on federal student loan repayments through August 31st of 2022. I know folks were hit hard by this pandemic. And though we’ve come a long way in the last year, we’re still recovering from the economic crisis it caused. This continued pause will help Americans breathe a little easier as we recover and rebuild from the pandemic.

AMY GOODMAN: News of the latest extension came shortly after hundreds of protesters marched on the Education Department in Washington, D.C., for a national day of action Monday demanding Biden cancel all student debt and calling for a May Day student debt strike if payments resumed. Student debt cancellation would give relief to some 45 million people, who owe nearly $1.8 trillion in student loans. This is Braxton Brewington of the Debt Collective speaking at the rally Monday.

AMY GOODMAN: For more, we’re joined by Astra Taylor, co-director of the Debt Collective. In response to reports of this latest extension Tuesday, just after your protest, the Debt Collective tweeted, “We have to keep pushing. This isn’t enough.”

Astra, welcome back to Democracy Now! Can you respond to the extension of the moratorium, but not debt forgiveness?

ASTRA TAYLOR: Well, you know, the timing is significant. We were in Washington, D.C., on Monday. The Debt Collective organized with over 70 co-sponsors — Dream Defenders, Harriet’s Wildest Dreams, Ohio Student Association, Higher Ed, Labor United, so organized labor — and really had this show of force, representing those 45 million borrowers that you talked about. We threatened a debt strike, as you said. We had a letter signed by over a thousand faculty. We had people taking their debt to work. We had labor unions, like the Chicago Teachers Union, United Teachers of Los Angeles, passing resolutions in support of this. So this was, you know, months and months of organizing, going back actually from the last extension, to say, “We need action on this.”

We need to keep pushing for the cancellation. August 31st is two months before the midterms. So we have, actually, a tremendous amount of leverage. So I’m feeling very encouraged about the state of play right now. And we have to remember, none of these extensions — and we’re on extension five or six, depending on how you count — none of these extensions were granted out of the goodness of the administration’s heart. In December, the Biden administration said very clearly, “This is our final extension, and it is a top priority to turn back student loan payments.” You know, so here we are, 2022, saying, “OK, the extension is ongoing. But cancellation is still on the table.” We need to keep organizing. We need to keep pushing, because a pause doesn’t solve a crisis. You can’t pause a crisis. You have to cancel the debt.

AMY GOODMAN: I wanted to turn to Congressmember Alexandria Ocasio-Cortez, who tweeted Tuesday, following news of Biden’s plans, “I think some folks read these extensions as savvy politics, but I don’t think those folks understand the panic and disorder it causes people to get so close to these deadlines just to extend the uncertainty. It doesn’t have the effect people think it does,” she tweeted. Biden’s pause on student loan repayments comes months before the midterm elections. This is AOC on Inside City Hall with Errol Louis.

REP. ALEXANDRIA OCASIO-CORTEZ: It is Biden’s power and ability to cancel student debt, and nobody else’s.

ERROL LOUIS: Well, with his falling approval numbers, one would think that they might be open to trying something, other than, you know, sort of cruising down a path to a very tough reelection. Do you get any sense of whether or not they’re open to that?

REP. ALEXANDRIA OCASIO-CORTEZ: I think the fact that the Biden administration has not been squarely shutting down a lot of these executive orders does convey an openness, but I do think that time for the administration is running out.

AMY GOODMAN: Can you explain, Astra Taylor, why student debt cancellation would decrease the racial wealth gap in this country?

ASTRA TAYLOR: Absolutely. It is one of the most effective ways to quickly narrow the racial wealth gap, and that is because Black borrowers are disproportionately burdened by student loans. People who hold the most student debt are women. Two-thirds of the student debt holders are women, with Black women burdened most of all. And that’s because of things like the lack of intergenerational family wealth, right? If you have family money, your parents pay for you to go to college. You don’t have to borrow. And wage discrimination on the job — if you’re making less than your colleagues, it’s going to be harder for you to pay back those debts. And so, as my colleague Braxton said in his great speech, you know, this is not just about the individual debtor. This is about whole families. This is an intergenerational issue. And so what happens is that, statistically, white borrowers, especially white men, are able to pay down their debts more quickly than their Black counterparts, who wind up owing far more over the terms of a loan than they actually borrowed.

So this is why we reject the concept of forgiveness. We are demanding justice and cancellation, because a lot of people actually end up — you know, they’ve paid off the principal. They’ve paid off the core note. They’re just stop paying these compounding interests and fees. And so, that’s why cancellation needs to happen. And as AOC said, this is something the president can do with the flick of a pen, signing an executive order. And he is creating chaos through these extensions and these delays. We need decisive action, especially with the midterms looming.

AMY GOODMAN: Astra Taylor, we see how much money the government will release when it comes to war. Explain exactly who is fighting against debt cancellation.

Unfortunately, people who we think should be allies — four-year, two-year public colleges and universities — are attached to the tuition-funded model, the debt-driven model, that we have in place. So we have to work to organize faculty at those institutions who can shift the balance of power there so that they’re not obstacles.

And, of course, there’s always the conservatives, who say, “Well, what’s next? You’re going to cancel student debt and come for medical debt? You’re going to come for the $20 — $30 billion of back rent people owe?” And so they’re against that cancellation. But to that, the Debt Collective says, “Yes, indeed, student loans shouldn’t exist. Neither should medical bills. And, yes, people should have the right to housing.”

AMY GOODMAN: And, of course, President Biden is from Delaware. Isn’t that where so many of those creditors are based?

ASTRA TAYLOR: Indeed, President Biden is from Delaware, which is the — one of the finance capitals of the world. And I think what motivates Biden here is a very dated conception of who a student debtor is. We hear this — you know, there has been a shift in his rhetoric. He was boxed into a corner on the campaign trail, was forced to run on debt cancellation, thanks to years and years of grassroots organizing and pressure. The minute he’s in office, he starts hemming and hawing and talking about the fact that, you know, “Oh, well, do we want to cancel the debts for lawyers and doctors?” So I think he’s got a — you know, in addition to his financial ties, he doesn’t understand who actually is pursuing higher education in this country, who is burdened by debt, the fact that 40% of student debtors don’t even have a college degree.

AMY GOODMAN: We want to thank Astra Taylor for being with us, co-director of the Debt Collective. 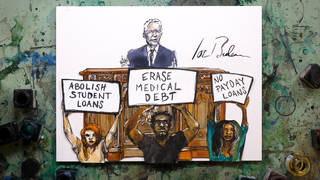