Amazon has fired two workers who helped organize the first successful U.S. union at Amazon’s Staten Island JFK8 warehouse. This comes as the National Labor Relations Board on Monday upheld a complaint that Amazon violated labor law in the Staten Island union vote by holding mandatory worker meetings to dissuade employees from voting to unionize. We speak with the fired workers, Tristan “Lion” Dutchin and Mat Cusick, who say they need the support of the NLRB and pro-worker legislation to protect them against retaliation by Amazon.

AMY GOODMAN: As we continue to speak with workers fired during the wave of union organizing, we turn now to two Amazon workers who were part of the first successful organizing effort in Amazon’s history at Amazon’s Staten Island JFK8 warehouse, which voted to unionize last month. They were both fired this month. Amazon told The Washington Post the firing of the two workers are, quote, “unrelated to each other and unrelated to whether these individuals support any particular cause or group.” But we wanted to find out more.

Mat Cusick is with us, who was told by Amazon’s human resources on May 4th that he’s terminated for, quote, “voluntary resignation due to job abandonment.” But he says he was fired for taking COVID-related leave. Meanwhile, Tristan “Lion” Dutchin, whose image and comments were featured in several media outlets during the organizing drive, was told Friday, May 7th, that he’s being terminated for falling behind on productivity goals.

This comes as the National Labor Relations Board Monday upheld a complaint that Amazon violated labor law in the Staten Island union vote by holding mandatory worker meetings to dissuade employees from voting to unionize.

For more, we’re joined by Tristan “Lion” Dutchin and Mat Cusick, both of them organizers with the Amazon Labor Union.

We welcome you both to Democracy Now! Mat, you’re the spokesperson for the union, the Amazon Labor Union. How did you get fired?

MAT CUSICK: Well, I wouldn’t say I’m the spokesperson, exactly. I’m an organizer with the union who does do some communications stuff.

But I was on a COVID care leave that I was told was until April 29th. Instead, they extended the leave only until the 26th. And then, they, after three days, began termination proceedings against me for abandonment of my job. They didn’t tell me anything about that until the three days, which was supposed to be the last day of my COVID leave.

AMY GOODMAN: You have COVID?

MAT CUSICK: No, I was caring for someone with COVID. This was the leave that I was granted.

JUAN GONZÁLEZ: And this issue of this coincidence of you being fired for not meeting productivity goals — most people are not aware of these productivity goals that Amazon has for its workers. Could you talk about that and why you don’t believe that that was the real reason?

MAT CUSICK: Well, Tristan was fired for productivity. He could speak to that. I can say that the context around that is that these productivity requirements have been made illegal, to a great extent, in California. And New York has just issued legislation, New York state, the Warehouse Worker Protection Act, to make it illegal in New York, as well, because we know that these productivity quotas are a great reason why Amazon has two to three times higher injury rate than other warehouses, which are already some of the most dangerous places to work in the United States.

JUAN GONZÁLEZ: And, Tristan, could you talk about what you believe the reason was for your firing?

TRISTAN DUTCHIN: The reason for my firing was, as mentioned, productivity, not meeting the certain time rate or goal. I was recently terminated May the 7th due to falling behind rates. I fell behind rates in the past, of course, me just being a regular worker working at a regular pace. These people expect you to work really fast, like to speed it up. They expect you to pick items for like 275 an hour at a universal station and 375 an hour at the ARSAW station.

They sent a couple of retrains, you know, people to retrain me, from time and time again. My last retrain was, I think, three weeks ago. After that, that’s when I started to, like, speed it up and started to try to, like, meet the goals. And then, all of a sudden, someone just came out of nowhere, said that I had to report to HR, and they just fired me, just like that. They kept every, like, write-up they had of me in the past said record. And normally the write-ups are supposed to expire within like 50 or 60 days, but they just, like, somehow kept that on record, and they just terminated me.

JUAN GONZÁLEZ: And you mentioned these rates. Again, for viewers who have never been in an Amazon warehouse, you’re saying 275 an hour. That’s about five items per minute that a worker is required to pick and put on a conveyor belt?

TRISTAN DUTCHIN: Yeah, somewhat. It depends, because there’s two stations. The universal station is like the regular station where you pick. The ARSAW is, like, you go maybe like two or three steps up. It’s a bit higher, which is like you have to do 375 an hour, too. But the ARSAW station is a bit different from the universal.

AMY GOODMAN: And can you talk about being a very visible organizer around the Amazon Labor Union’s organizing efforts? You won major victory at the Staten Island warehouse, but across the street it was voted down. Can you talk about the difference you think, but also whether that was a factor in you being fired? Your face adorned a number of the organizing effort flyers.

TRISTAN DUTCHIN: Yes. This also has to do, like, with retaliation, me being affiliated with the Amazon Labor Union. I don’t let word out that I’m part of the union. I don’t let HR know. I don’t let nobody in the warehouse know. But they can know — they know, and they can tell, because they see my face all over the news, me doing speeches, doing interviews. I feel like this was like just basically — like, this was an intent target.

You know, after we won the victory of JKF8 back in April, you know, we lost the LBJ5. And I feel like Amazon is just regaining their power, everything to do what they want, you know, sending more union busters. Everything is just overturning. So, I think it does play a big part, you know, me — and not just me, a few other organizers organizing.

MAT CUSICK: Yeah. So, the National Labor Relations Board has been much more receptive to charges being filed around unfair labor practices. They’re also much more willing to use the 10(j) injunction to protect workers before the hearings are resolved. This is one of the things that we’re going — we are both going to be filing ULP charges with the NLRB regarding our retaliation cases, and also we will be asking for 10(j) injunctions so that we will be reinstated while those cases go through the process. And this is something that the previous NLRB was not doing. And so, we’re grateful that there is a little bit of an opening for protecting workers.

That being said, we do need to pass the PRO Act. We need to pass a lot of different legislation. We need to fund the NLRB more. The NLRB needs to get even more assertive in the sorts of ways that it is helping workers, because the laws, as they are, are very broken. Now, Joe Biden did invite our president, Chris Smalls, to the White House. And Chris Smalls laid out the things that need to be done, if we can’t get the PRO Act —

AMY GOODMAN: We have 10 seconds, Mat.

MAT CUSICK: He needs to do something. If we can’t get the PRO Act done, he needs to sign an executive order right away. We need help. All workers do.

AMY GOODMAN: Well, we want to thank you both for being with us, Mat Cusick and Tristan Dutchin, organizers with the Amazon Labor Union who were fired this month after the first successful organizing effort in the company’s history at Amazon’s Staten Island JFK8 warehouse. I’m Amy Goodman, with Juan González. Stay safe. 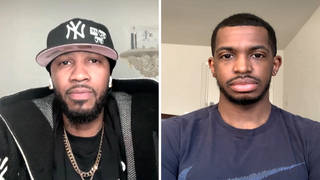