President Biden is on his first trip to Asia as president to meet with other leaders from the “Quad” — Japan, India and Australia — as part of efforts to counter China’s growing power in the region. During the trip, Biden has contradicted longstanding U.S. policy of “strategic ambiguity” on Taiwan by vowing to defend it militarily if China attacks. “This idea that the United States is obligated to come to the defense of Taiwan if it [China] attacked, is simply not U.S. policy,” says Michael Swaine, director of the Quincy Institute’s East Asia program. Swaine says the official U.S.-China policy on Taiwan — which prioritizes peaceful unification over military force — has been subtly weakened by both sides, and “President Biden’s recent comment weakens it even further.”

President Biden is in Tokyo on his first trip to Asia while in office to meet with members of the Quad — that’s the prime ministers of Japan, India and the new prime minister of Australia — as part of efforts to counter China’s power in the region. China has called the Quad a, quote, “Indo-Pacific NATO” and accused it of, quote, “trumpeting the Cold War mentality” and “stoking geopolitical rivalry.” This comes as India’s Prime Minister Narendra Modi has resisted U.S. pressure to condemn Russia’s invasion of Ukraine. Tension has also hung over the Quad summit since Monday, when Biden contradicted longstanding U.S. policy on Taiwan, vowing to defend Taiwan if it’s attacked by China. He made the comment when questioned at a news conference.

NANCY CORDES: You are?

PRESIDENT JOE BIDEN: That’s the commitment we made. That’s the commitment we made. We are not — look, here’s the situation. We agree with the One China policy. We’ve signed on to it and all the attendant agreements made from there. But the idea that it can be taken by force, just taken by force, is just not appropriate. It will dislocate the entire region and be another action similar to what happened in Ukraine.

AMY GOODMAN: White House officials tried to walk back Biden’s comments, as they’ve done before. But Defense Secretary Lloyd Austin said Biden’s comment “highlighted our commitment under the Taiwan Relations Act to help provide Taiwan the means to defend itself.” Today Biden was again asked about Taiwan. This time, he insisted there’s been no change to U.S. policy.

JEREMY DIAMOND: Mr. President, is the policy of strategic ambiguity towards Taiwan dead?

JEREMY DIAMOND: Could you explain?

NANCY COOK: Mr. President, would you send troops to Taiwan if China invaded?

PRESIDENT JOE BIDEN: Our policy has not changed at all. I stated that when I made my statement yesterday.

Welcome to Democracy Now!, Michael Swaine. Why don’t you start off by responding to the significance of what Biden has said — by the way, not just yesterday, and clearly very deliberately, but he has repeated this several times — and then China’s accusation that the Quad, this group of four countries that are meeting — Australia, India, Japan and the United States — are an “Indo-Pacific NATO”?

MICHAEL SWAINE: Right. Well, thank you. Thanks for having me.

Yeah, President Biden has spoken now — I think it’s the fourth time he’s said something like he said yesterday, that the United States is committed to come to the security of Taiwan, implication being that if Taiwan were attacked by China. This, if he meant that exact meaning, it is literally not in line with U.S. policy. U.S. policy states that the United States would regard with grave security — grave concern, pardon me, any attack on Taiwan and would — the president would consult with the Congress on what exactly to do about it. That is in U.S. law. There’s no commitment to deploy forces as if Taiwan were a security ally of the United States, which it is not. But there is a commitment to provide defensive articles to Taiwan — i.e. military sales — as the United States judges the security situation becoming more threatened for Taiwan. And the U.S. is providing those military sales now for many, many years. But this idea that the United States is obligated to come to the defense of Taiwan if attacked is simply not U.S. policy. U.S. policy is what’s called strategic ambiguity. It doesn’t want to be clear on this issue, because, A, it doesn’t want to provide what you might call a blank check to Taiwan through possibly endless types of salami slicing or provocation that the U.S. would then need to come to the defense of Taiwan to sort of bail them out of a problem.

And also, such language reinforces Beijing’s impression that the U.S. is revising its policy and viewing Taiwan as a de facto security partner and an independent nation. And this would absolutely undermine the One China policy that the United States has held now for many decades. Under that policy, it traded a credible U.S. One China stance, that did not challenge the Chinese position that Taiwan is part of China — it traded that for a Chinese assurance to pursue peaceful unification as a top priority, while not completely giving up the possibility of using force, but not putting that as a top priority. Now, both sides have this understanding as the basis of normalization, and it’s being steadily weakened now by both sides. And President Biden’s recent comment weakens it even further.

JUAN GONZÁLEZ: Well, Michael Swaine, I wanted to ask you — when you talk about this strategic ambiguity, this policy, could you talk a little bit about the origins of it in terms of — there was a period of time, after the founding of the People’s Republic of China in 1949, when the U.S. tried to ostracize and not recognize the existence of the People’s Republic and saw the nationalists in Taiwan as the legitimate rulers of all of China.

JUAN GONZÁLEZ: Could you talk about the change that occurred back during the Nixon years and the possible implications of President Biden attempting to change that policy?

MICHAEL SWAINE: Yes. I mean, the change occurred back during the Nixon period in the early 1970s with the opening to — so-called opening to China, when Nixon flew to Beijing and met with Mao Zedong, met with Zhou Enlai. And then, later on, several years later on, actual formal diplomatic relations were normalized in 1979, and the United States transferred its recognition from Beijing — from Taiwan to Beijing, having Beijing and the People’s Republic of China being the sole government of China.

Now, that happened because of largely strategic reasons at the time. The Soviet Union had become the adversary of both the United States and the People’s Republic of China. And President Nixon thought it would be a much better strategic thing for the United States to have good relations with China as it developed relations or tried to develop relations with Russia, rather than have Russia and China have good relations. So, both China and the United States had a common interest in working with each other to try to maneuver against, counter, exert leverage against the Soviet Union at that time. So that’s the origins of the shift.

But Nixon also wanted to have contact with China because he thought it was ridiculous to be shunning a billion people — or, I guess at that time it was less than a billion people, 800 million people — on the planet for many decades as we had done, and that it was serving no positive purpose and that we needed to have a normal relationship with the People’s Republic of China.

So, for Taiwan, although we ended diplomatic relations with Taiwan and no longer regarded Taiwan as a government that represented China and that was a sovereign independent state, we acknowledged — without formally recognizing, but we acknowledged and did not challenge the Chinese position that Taiwan is a part of China. And so, we also established relations with Taiwan, but unofficial relations, nondiplomatic relations, which included contacts in the economic, social, cultural level, some degree of governmental level, but not through diplomatic means. And then —

AMY GOODMAN: Well, this is something we will continue to cover, Michael Swaine, director of the Quincy Institute’s East Asia program, longtime U.S.-China relations analyst. 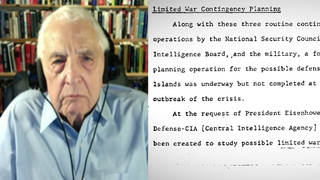