Thousands of protesters in Sri Lanka have stormed the homes of the president and prime minister and are refusing to leave until they officially resign, as the president faces accusations of corruption that bankrupted the country and led to a massive economic crisis. President Gotabaya Rajapaksa is set to formally step down Wednesday and has reportedly tried to flee the country. We go to the capital Colombo to speak with Bhavani Fonseka, a human rights lawyer and a senior researcher at the Centre for Policy Alternatives, who has been participating in the protest. She describes the months of peaceful protest that led to this moment. “Considering the crisis and considering the demands of the people that there has to be a change, we need to look to general elections as soon as the environment is conducive,” notes Fonseka.

AMY GOODMAN: We begin today’s show in Sri Lanka, where President Gotabaya Rajapaksa has reportedly made a failed attempt to flee the country ahead of his resignation set for Wednesday. Agence France-Presse reports the president may now use a navy patrol craft to flee the island nation, which is facing a major economic crisis and saw thousands of protesters storm the president’s home Saturday and set fire to the prime minister’s residence. Protesters are still occupying the president’s home until he formally resigns. Rajapaksa is immune from arrest while he’s still president, and may be trying to leave in order to avoid being detained. He’s accused of bankrupting Sri Lanka with massive corruption and economic mismanagement and also of war crimes during his time as defense minister.

After his resignation, an interim all-party unity government is expected to lead the country. Sri Lanka’s Parliament will meet Friday, and a new president is set to be elected by the members of the Parliament next week.

For more, we go to the capital Colombo to speak with Bhavani Fonseka, a human rights lawyer, senior researcher at the Centre for Policy Alternatives in Colombo. She’s been participating in the protests. Her recent article is headlined “Sri Lanka’s Crisis and the Power of Citizen Mobilization.”

Welcome to Democracy Now! Bhavani, thank you so much for being with us. If you can start off by talking about how these protests began, now the protesters occupying the prime minister’s and the president’s home, demanding both resign? Talk about the power of citizen protest.

BHAVANI FONSEKA: Thank you, Amy, for having me. I mean, Sri Lanka is facing quite the remarkable period. At one level, we have an unprecedented political and economic crisis, but at another we’ve seen citizens peacefully protesting for months, asking for change, a change in political culture, a change in the political leadership and, basically, political accountability. So there is a real reawakening of the citizen, and it’s quite remarkable to see the numbers that have come out to the streets peacefully protesting over demands.

But what was even more remarkable was the numbers that came out on Saturday, on the 9th of July. And this was in a context where many don’t have fuel to travel, so many walked for hours to get to the protest site. And they occupied the protest site. And unlike the other days of protests, they were able to enter the presidential secretariat, the presidential palace and the official residence of the prime minister. And they are now occupying these spaces 'til the president resigns and the prime minister resigns. But so, it's quite dynamic and fluid days in Sri Lanka, but it’s all centered in this backdrop of citizens’ mobilization and the citizen — the power of the people to bring in change.

JUAN GONZÁLEZ: And, Bhavani Fonseka, if you could talk a little bit about the roots of the crisis? There’s a lot of international press coverage of what’s happening now, but there’s been little attention to how the crisis evolved, and especially in terms of whatever financial debt the country owes to outsiders. There was an International Monetary Fund group that visited the country at the end of June?

BHAVANI FONSEKA: Yes. So, Sri Lanka is in heavy debt. And that goes back — it predates this government, the government of Gotabaya Rajapaksa. The debt is really going back to different governments. And the debt has got to a point where now Sri Lanka is facing bankruptcy. And they announced a default a couple of months ago. So, really, there is massive debt.

But also it’s related to the mismanagement of this government. Now, in 2019 onwards, after Gotabaya Rajapaksa took office, there’s been several policy decisions that led to this present crisis. One was the tax cuts in 2019 that significantly impacted the revenue of the government. In 2021, there was an overnight ban on chemical fertilizer, which has impacted the agriculture sector and food security. And, of course, we had the challenges with the COVID, the pandemic, but also, more recently, with the Ukraine-Russian war, so those have also impacted. But largely it’s been domestic policies and mismanagement of this government which has led to an economic crisis. And now we are facing also a political crisis and political instability.

So, all this has resulted in a situation where many in Sri Lanka are facing severe hardships, getting essential items, long power cuts, long queues to get fuel. I mean, we are at the moment having long queues where people have to stay for days, three, four days, just to get some petrol and diesel. So that is the hardship that’s faced by many people, and it’s impacted most in Sri Lanka. And it has resulted in extreme anger and frustration among the people.

So, the public mobilization, demanding for accountability, demanding for change, stems from this economic crisis and the mismanagement. But now it’s become a political crisis, as well, so it’s a combined situation in Sri Lanka. And now it’s also there is a situation where we are seeing an unfolding humanitarian crisis, so multiple challenges on the ground.

JUAN GONZÁLEZ: Now, both the president and the prime minister have said they will resign, but they have not yet done so. How do you see events unfolding over the next few days? And who is most likely to run a caretaker government?

BHAVANI FONSEKA: So, this is a very worrying dynamic. You know, you would think with all the people peacefully protesting and all the developments over the last few days — but over the last few months, really — that the message would be — you know, it would be clear, that they are asking for the resignation of the president, and they’re asking for the resignation of the prime minister. Now, I would have thought any government would have heard this message and resigned immediately, but we are at a situation where the president has said he will resign tomorrow —

AMY GOODMAN: Bhavani Fonseka, I’m looking at an article by Reuters, “How a band of activists helped bring down Sri Lanka’s government.” It says, “In June, a few dozen activists started meeting regularly at a seaside tented camp in Colombo for hours-long sessions to think up ways to revive Sri Lanka’s flagging protest movement.

“The group, which included a Catholic priest, a digital strategist and a popular playwright, succeeded beyond their wildest hopes.

“Within weeks, hundreds of thousands of people descended on Colombo. After initially clashing with police, protesters occupied key government buildings and residences, forcing President Gotabaya Rajapaksa and his prime minister to promise to step down.”

What is your assessment? Would you agree this band of activists, the Catholic priest, digital strategist, popular playwright, gathering together, and soon hundreds of thousands of people are now occupying the prime minister and president’s residences and demanding they resign?

BHAVANI FONSEKA: Well, it’s quite remarkable what we are seeing, you know? Different sectors, communities coming together. I mean, this we have not seen in Sri Lanka’s past, and Sri Lanka has a rich history of protest. But this kind of mobilization is quite unique. And the fact that the protests have been there for now several months — this is not something that just happened in the last couple of days, but over the months people have persistently come out, and largely peacefully coming out and demanding for change. So, that’s quite something.

And the result is, in May, we had the then-prime minister resigning. In April, we had the Cabinet resigning. So we saw results. But we also have seen the president holding onto office, despite all the protests, despite the clear message for him to go home. So, now with the announcement that the president is going to leave on Wednesday the 13th, we hope that he keeps to his word, because if he doesn’t leave, there will be further instability.

But his resignation alone is not going to satisfy the protesters and the people of Sri Lanka. They are asking for the resignation of the prime minister, as well, and that there is a new caretaker government that happens. And we need to also think of next steps. You know, a caretaker government can serve a particular time period, but considering the crisis and considering the demands of the people that there has to be a change, we need to look to general elections as soon as the environment is conducive to have the elections. So, a lot of things are on the table. A lot of things, I hope, can move forward in terms of addressing the present crisis and ensuring there is stability.

AMY GOODMAN: I want to thank you, Bhavani Fonseka, for being with us, human rights lawyer and senior researcher at the Centre for Policy Alternatives in Colombo, participating in the protests. We’ll link to your article, “Sri Lanka’s Crisis and the Power of Citizen Mobilization.” Of course, we’ll continue to follow what’s happening in Sri Lanka.

As the Pentagon authorizes another $400 million for the fight in Ukraine, after break, we will go to Joe Lauria, editor-in-chief of Consortium News, about the pressure on independent media to follow a single approved narrative on the Ukraine war. Stay with us. 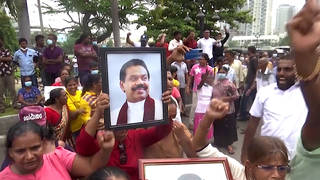