We look at the recent murders of British journalist Dom Phillips and Indigenous researcher Bruno Pereira in Brazil’s Amazon rainforest and what it says about Brazil’s far-right President Jair Bolsonaro, who once vowed, “There won’t be one more inch of Indigenous reserve.” Phillips and Pereira went missing in June, and their remains were found dismembered about two weeks later. This week, a Brazilian Senate commission investigating the murders recommended a military operation in the Javari Valley to address the rise in organized crime there. Police have arrested five people linked to the murders and identified a suspect arrested earlier as the leader of an illegal fishing organized crime group in the Amazon region. “When the president dismantles public policies and public institutions that should serve Indigenous rights, when the government persecutes its civil servants whose mandate it should be to protect the Indigenous peoples and the policies applied to them, we become more vulnerable,” says Indigenous lawyer Eliésio Marubo, who led a search and rescue mission for Phillips and Pereira and recently returned to Brasília after visiting with U.S. lawmakers in Washington, D.C., to call for an independent investigation into the murders.

AMY GOODMAN: This is Democracy Now! I’m Amy Goodman, as we continue to look at Brazil, turning to the murders of the British journalist Dom Phillips and the Indigenous researcher Bruno Pereira, who went missing this past June in Brazil’s Javari Valley in the Amazon rainforest. Their remains were found dismembered about two weeks later.

This month, police arrested five people linked to the murders and identified a suspect arrested earlier as the leader of an illegal fishing organized crime group in the Amazon region. This week, a Brazilian Senate commission investigating the murders recommended a military operation in the Javari Valley to address the rise in organized crime.

Well, Democracy Now!’s Juan González and I recently interviewed Indigenous lawyer Eliésio Marubo, who led a search and rescue mission for Phillips and Pereira, just returned to Brasília after visiting with U.S. lawmakers in Washington, D.C., to call for an independent investigation into the murders. I asked him to begin describing what he understood happened to the men, and his efforts to find them.

ELIÉSIO MARUBO: [translated] First, the initial thing we were concerned about, as Univaja, the Indigenous organization in the Javari region, was our commitment to find the bodies — find them initially alive, but then the bodies — and to understand what had happened. And as soon as that, we heard what had happened, their disappearance, then we went to look, search for them.

So, after we had located their remains, the second part of what we went about was to share information that we had collected with the authorities and to demand for an investigation so we could understand who had committed such horrible things to our companions.

And the third part of our action was to really engage in broad action to ask the authorities to do their work, to demand an independent and thorough investigation. And that’s why we reached out not only to the Brazilian authorities but also abroad. And that’s what I came to do in the U.S.

JUAN GONZÁLEZ: Eliésio, could you talk about the — Dom and Bruno were working on a book called How to Save the Amazon. Can you tell us about the Javari Valley and the people who live there?

ELIÉSIO MARUBO: [translated] The Javari Valley is a very important area for Brazil. It is the entryway to two other countries. We’re in a triple frontier there. There are several social problems there to be faced, mainly the most important of which is security. Our work has focused on safeguarding our communities, especially access to public policies, and also to protect them from non-Indigenous people, who have other interests in our territory. Most of the Indigenous people in the region have given us the mandate to represent them. So we are an organization that represents all the Indigenous peoples living in that region.

So, the reflection we bring, the problem we bring is: How is Brazil taking care of its borders? And how is Brazil taking care of its original Indigenous people? Because we are dying, and our partners are dying, and we’re dying in a very abrupt and cruel manner. What we’ve observed in the region is a deliberate lack of action by the Brazilian government, and that has led to the victimization of our peoples, nonprotection of our peoples and of our territory, in the national and international scenario. This is the great issue and the great dilemma in the Javari Valley.

JUAN GONZÁLEZ: Can you describe how life has gotten worse for Indigenous people under the current president of Brazil, Jair Bolsonaro?

ELIÉSIO MARUBO: [translated] The losses have been suffered by the whole population, not just by the Indigenous population, under this Bolsonaro’s administration. But the Indigenous peoples have suffered more, because we are much more dependent on public policies. When the president dismantles public policies and public institutions that should serve Indigenous rights, when the government persecutes its civil servants whose mandate it should be to protect the Indigenous peoples and the policies applied to them, we become more vulnerable. And that is why Indigenous organizations, and specifically here Univaja, have had to take on the role of protection of fundamental rights in our region.

AMY GOODMAN: Eliésio Marubo, if you could tell us — I mean, you are incredibly brave to have launched the investigation into Dom and Bruno, because, of course, what they faced in their murders is — as you’re explaining, is the threat to so many people in the Javari region and the Amazon. Talk about what you found and if you feel that there’s any connection to the highest ranks of the Brazilian government right to Jair Bolsonaro, at least the attitude toward preserving the Amazon.

ELIÉSIO MARUBO: [translated] Bolsonaro’s omission, in terms of protection in the Javari region, has opened wide doors to the presence of organized crime in the region. And what I did was to give visibility to our region, to the Javari Valley, because we have gone through problems for many decades. I’ve paid a price, a very high price, for speaking up. And I know I will continue to pay a price. But I am too tired of the persecution we’ve suffered. I am too tired of just watching the difference between what the policies are and what we actually get. So, it was really important to come to the U.S., to go to the U.S. and speak to members of Congress. I told them I don’t know how long I have left in this life, but it was very important that we could establish this initial dialogue for our cause.

JUAN GONZÁLEZ: Eliésio Marubo, I wanted to ask you — you went to Washington. You appealed to the lawmakers here in this country. But to the American public, who doesn’t — many of whom do not know what is going on in Brazil, are there major American companies that are directly exploiting the resources of the Amazon to the detriment of the people of Brazil and the Indigenous people? And if so, can you name some of those companies?

ELIÉSIO MARUBO: [translated] So, first to say that we have endeavored to establish communication not just with politicians, but with the public in general, with common people and society as a whole, because we believe that society as a whole should be involved and should care about these issues. What is going on there is a relevant theme for fundamental rights, namely the right to life. It’s important that society is made aware of what is happening in our region, in the same way that they’re made aware of what’s going on in Ukraine with the war, in the Middle East. They need to know that there is immense suffering in Brazil, that we are suffering many losses. And it’s Brazil, what they say in the international arena, there lies, and we have to bring this information to the public.

When you ask about U.S. enterprises in the area, not directly. But we, of course, know that we have illegal wildcat mining in the area. And there are many tons of gold, for example, that are extracted from our region illegally. And where do they go? They go abroad, and they go to the U.S., and they end up in U.S. stores and in U.S. storefronts. So, the gold that is decorating someone’s arm or someone’s earring or is given as a gift, that costs lives. That costs — it comes with our blood. It comes with our Indigenous blood.

And also the issue of meat. The meat that ends up in your restaurants is meat that came from the Amazon region, with big companies. So, the meat that is consumed abroad carries the flesh of Indigenous people. The way it is produced is a way that is harmful to Indigenous people. It costs lives, especially in the westernmost part of our region.

Coming up next, a new documentary about the Indigenous struggle to save the Amazon. It’s called The Territory. Stay with us. 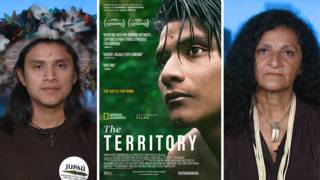