In a much-anticipated move, President Biden has signed an executive order Wednesday for student debt relief that could help more than 40 million borrowers by canceling up to $20,000 of their federal loans. Many advocates for canceling student debt say Biden’s plan doesn’t go far enough, while Republicans decry the plan as “student debt socialism.” We speak to Astra Taylor, writer, filmmaker and co-director of the Debt Collective, a union for debtors and one of the original advocates for a debt jubilee that would cancel all student debt. Despite the mixed reaction, “this is incredibly significant when you think about where we began as a movement not that long ago,” says Taylor, who also notes that debt strikes and the fight for full cancellation will continue.

AMY GOODMAN: President Biden has announced plans to cancel as much as $20,000 in student debt per borrower to help as many as 40 million people. The president outlined his plan during a speech at the White House Wednesday.

AMY GOODMAN: President Biden also announced plans to extend a moratorium on all federal student loan payments through the end of this year. As Biden walked away from the podium, reporters shouted questions. Listen closely.

REPORTER: Mr. President, is this unfair to people who paid their student loans or chose not to take out loans?

PRESIDENT JOE BIDEN: Is it fair to people who in fact do not own multibillion-dollar businesses if they see one of these guys give them all a tax break? Is that fair? What do you think?

MADDY CLIFFORD: And what we’re doing with the Debt Collective is really pushing and applying that pressure, because a full cancellation is also — like, it’s like, “Oh, you’re asking for too much. You’re asking for too much.” I’m asking to be back at zero. I’m asking for a fair chance, like, to actually build wealth. Like, this isn’t — they’re always telling us it’s not enough. And, you know, two years ago, $10K was a ridiculous thing to ask for, and now we’ve just won it. So, what that tells us and what shows us is that we have to keep fighting.

AMY GOODMAN: Those are the words of the artist and writer Maddy Clifford, speaking after President Biden unveiled his plan to cancel as much as $20,000 in student debt for millions of borrowers each. In a moment, we’ll hear more from Maddy Clifford, who’s featured in a short documentary from The Intercept titled Freedom Dreams: Black Women and the Student Debt Crisis. But first we’re joined by Astra Taylor, who co-directed Freedom Dreams. She’s also an organizer with the Debt Collective, an organization with its roots in the Occupy Wall Street movement. She wrote the foreword to the Debt Collective’s book, Can’t Pay, Won’t Pay: The Case for Economic Disobedience and Debt Abolition.

ASTRA TAYLOR: Well, it’s important to be very clear that the Debt Collective has always fought for full student loan abolition and free public college for all, to stop the crisis of student debt at its source. So that is our position. That’s what we think needs to happen. But, you know, President Biden did not campaign on that. He was boxed in and forced to campaign promising some debt relief. This proposal he offered yesterday doesn’t even meet the full threshold of his campaign promise; nonetheless, you know, it is a stepping stone for this movement. It’s a milestone.

So my reactions, you know, are mixed. It’s bittersweet, because assuming — you know, there are some problems in terms of the fact that they are requiring people to fill out applications to get this relief. But assuming people do that, then, yes, up to 20 million people can have their balances wiped out. That’s absolutely game changing. We’re seeing messages from people, you know, hearing from friends and family that they’re crying, that their lives have been changed. But also, $10,000 or $20,000, for millions of people, doesn’t touch the interest that’s accrued and capitalized. It won’t reduce their monthly payments. And we need to keep fighting for those folks, as well. And we will. So, mixed reaction, but this is incredibly significant when you think about where we began as a movement not that long ago.

AMY GOODMAN: And what do you say to those who say this is bailing out the higher education-industrial complex, that they should be lowering their tuitions? They’ve got, together, billions of dollars in endowment. Why should they be bailed out?

ASTRA TAYLOR: Oh, we’re definitely not bailing out the higher education system right now. We’re bailing out human beings who have been told for decades that the only path out of poverty is to pursue an education. The United States has substituted, you know, labor policy — we should have been strengthening unions, providing a jobs guarantee — with telling people, “Hey, pull yourself up by your bootstraps. Take out student debt, so that you can then have the credential you need to be employed.”

The thing is, again, these policies do need to be coupled, debt cancellation plus restructuring the political economy of higher education, so that public colleges are actually public again, and that people can go to school and pursue higher education if they want to, without the burden of debt. But we’re going to have to fight that fight. So, there’s often a false opposition in the way people frame this thing. And, you know, often people who point out that student debt cancellation doesn’t get to the root of the problem have no intention of fighting for the solution, again, which is free public college. But that’s what we are going to do. That is the horizon that we at the Debt Collective and a growing coalition of allies are working towards.

AMY GOODMAN: Mitch McConnell saying, “President Biden’s student loan socialism is a slap in the face to every family who sacrificed to save for college, every graduate who paid their debt and every American who chose a certain career path or volunteered to serve in our Armed Forces in order to avoid taking on debt.” Astra?

ASTRA TAYLOR: So cynical. I mean, first off, I am one of the millions of people who did have to pay their debts. I paid it in full. I do not want anyone else to have to suffer just because I did. Social progress means that other people do not have to suffer through something that previous generations did. And the fact is, polling shows that most people have that attitude. Most people are not as selfish and cynical as Mitch McConnell. In fact, student debt cancellation is more popular with people who didn’t go to college than people who did, probably because they understand that the costs are rising so fast, they’re prohibitive. So, this is something people are really celebrating.

And, of course, let’s not forget that, you know, where was this — where was this grave concern when large corporations and millionaires were getting forgivable PPP loans, which on average were worth about $90,000? Where were they when the banks were getting bailed out, right? Where were they when the government was buying billions of dollars of bad corporate debt? So it’s just very cynical. And I think you can judge a policy by its enemies. The fact that people like Mitch McConnell, Betsy DeVos and others are so upset shows you that this is, for once, a form of debt relief that’s going to help working-class and poor people, overwhelmingly. 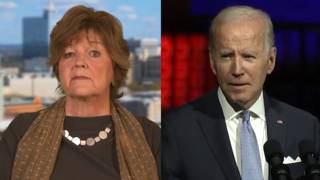