Democratic Senator Joe Manchin abandoned his own energy permitting proposal Tuesday that would have fast-tracked the federal review of energy projects, including the contested Mountain Valley Pipeline. Following intense pressure from a range of climate justice and Appalachian organizers, Manchin asked Senate Majority Leader Chuck Schumer to drop the permitting reforms from a funding bill after it became clear he did not have the votes to pass the proposal. 350.org founder Bill McKibben says Manchin may try to partner with the GOP to revive the proposal later this year, but still says the news represents an “impressive win by grassroots environmentalism.”

In major news, climate news, actually, from Capitol Hill, Senator Joe Manchin has abandoned — at least for now — his proposal to speed up federal review of energy projects like the Mountain Valley Pipeline. Manchin wanted to shorten public comment periods on proposed fossil fuel projects, while weakening environmental and public health laws. His proposal would have nearly guaranteed the approval for the Mountain Valley Pipeline in West Virginia. On Tuesday, Manchin requested his proposal be removed from a stopgap funding bill after it became clear it didn’t have enough votes to pass. Manchin’s proposal had faced fierce opposition from climate justice groups.

Bill, thanks so much for joining us. You were protesting in Washington the World Bank. You wrote this piece about this latest news, that surprised a lot of people, the scuttling of Manchin’s bill. And you’re doing this in the buildup to this massive storm hitting Florida.

BILL McKIBBEN: Well, it’s, Amy, a tremendous reminder of why we have to do this work. Seán from WMNF did a great job of describing the climate implications of Hurricane Ian. Everyone just needs to remember that the ocean is a foot higher already than it was the last time a major hurricane hit the Tampa area. Our job now is, we can’t prevent that foot; we’ve got to keep it from getting much higher still.

Yesterday was a pretty remarkable turn of events. The last few weeks have featured remarkable campaigning led by climate justice frontline groups: so, the Climate Justice Alliance, People vs. Fossil Fuel, Indigenous Environmental Network. They were backed up by the Big Green groups: Sierra Club; LCV, League of Conservation Voters; others. And, of course, there was tremendous mobilization by people in Appalachia: POWHR, Protect Our Water, Heritage, and Rights; Appalachian Voices; Third Act Virginia — lots of groups that mobilized and scrambled to make the case against that pipeline, in particular, and against the rest of the giveaways in this bill to the fossil fuel industry.

The same sort of thing was mirrored on Capitol Hill. It was stalwart progressives that came out first against this: Bernie and, on the House side, Raúl Grijalva, Ro Khanna. But in the last week or so, they were backed up by others, who were somewhat unexpected. And one of the big turning points was when Tim Kaine, the senator from Virginia, came out strongly against including this fossil fuel giveaway in the continuing budget resolution. Tim Kaine is not a member of the Squad. He was Hillary’s running mate in 2016.

So, organizers did a tremendous job in the environmental justice movement of taking this and making it an issue that it was hard to avoid. It doesn’t mean — as you know, Amy and Juan, all environmental victories are temporary. This one may be more temporary than most. There’s already news today that Manchin and the Republicans are going to try and bring it back, attaching it in December not to the budget but to the Defense Authorization Act. And, you know, so, look, Big Oil never sleeps, and it never gives up. But for a day, anyway, an impressive win by grassroots environmentalists.

JUAN GONZÁLEZ: And, Bill, this was surprising because there was supposedly a deal between Manchin and Chuck Schumer in terms of this permitting — expediting permitting processes. What does this say about Schumer’s ability to control his own delegation?

BILL McKIBBEN: Well, I don’t — I mean, I don’t know that much about all the inside baseball here, but I do know that when senators got to look at the thing, they understood, you know, I mean, it was just a hideous deal. It, in essence, said that the federal agencies had to grant permits for this Mountain Valley Pipeline, that those permits basically couldn’t be challenged in court. If there were going to be new challenges, it directed which court they would go to. They were picking a court they thought would be conservative. I mean, this is the absolute definition of corrupt backroom cronyism, and it has nothing to do with policymaking in the normal sense of the word. It was Manchin’s attempt at extortion.

He already got a lot of goodies for Big Oil in the original Inflation Reduction Act. There’s wasted money on things like carbon sequestration and things. But, not content with that, he tried to go for this gift basket. And at least for the moment, the progressives in the House and Senate have said, “No, we’re not going to deliver that.”

AMY GOODMAN: So, Bill, you were in Washington, D.C., yesterday, part of a protest outside the World Bank. Can you explain why?

BILL McKIBBEN: Well, this is — I was actually in Washington for two protests yesterday, one up on Capitol Hill about this giveaway to the Big Oil and the other, yes, outside the World Bank.

There’s a broad coalition, again, led by very moderate forces — Al Gore has really been in the lead of it — trying to get the head of the World Bank fired because he’s not taking climate change very seriously. In fact, last week, in an interview in New York, he— with The New York Times, he was given six — count 'em, six — opportunities to say that global warming was real, that humans were heating the planet. And he passed on every one of them, finally saying, “I am not a scientist,” which is about as tired and lame a dodge as it's possible to imagine. So, yesterday morning, a bunch of us showed up at the World Bank, and we started reading all morning the actual peer-reviewed science, footnotes and all, out front through a microphone, just so he could hear what scientists think.

The idea that you’d need to be a climate scientist in order to take action on any of this is nuts. I mean, you’re going have a bona fide climate scientist, Peter Kalmus, on in a minute, and I think he’ll say you don’t need a Ph.D. in order to understand what’s happening here. We’re burning fossil fuel. It puts carbon into the atmosphere. The molecular structure of carbon traps heat that would otherwise radiate back out to space. Period. End of story.

And, you know, the end of the story is things like Hurricane Ian. It’s things like the epic heat wave that has gripped China all summer. It’s things like the completely unheard-of flooding in Pakistan right now. We should remember, as we grieve for our brothers and sisters in Florida as this happens, that this kind of stuff is happening absolutely everywhere. We have 33 million people displaced from their homes in Pakistan. That’s everybody from Boston to Baltimore. And that’s just at any given moment on this Earth now.

The planet is overheating, and we need people, like the president of the World Bank, who are in positions of serious trust to actually take it seriously. That this guy isn’t taking it seriously shouldn’t come as a surprise. He was an undersecretary of the Treasury in the Trump administration. Before that, if you look at his biography, it reads “chief economist for Bear Stearns” in the six years before it went bankrupt. Well, we cannot afford for the planet’s climate system to go bankrupt, so we better get somebody else in there who’s a little more on the ball.

JUAN GONZÁLEZ: And, Bill, in terms of taking the issue seriously, how do you assess the initial years of the Biden administration in terms of attacking the climate crisis head on?

BILL McKIBBEN: Well, I think that they’ve made a good-faith effort, Juan. And it will be interesting to see what happens now. They have been operating with one hand tied behind their back, because they desperately needed Manchin’s vote to get this, what eventually became the Inflation Reduction Act. And that meant they couldn’t use executive action without fear of offending him. So, after the election, either the Democrats will have no power at all — they’ll have lost the Senate and the House — or they’ll have picked up, one hopes, a few senators. In either of those scenarios, Manchin’s leverage is reduced, and hence the president’s ability to use executive action should increase some. So we may see a different kind of — we’re probably not going to see the big spending bill in the second half of the Biden administration, but we may see pressure for action in other ways from the administration.

AMY GOODMAN: Bill, we want to thank you for being with us. Bill McKibben, author, educator, environmentalist, founder of the organization Third Act, organizing people over 60 for progressive change, also co-founder of 350.org. We’ll link to all your pieces. I know one’s coming out today on the storm. 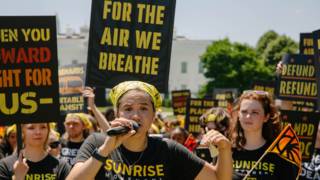