The Justice Department and Congress are facing new calls to investigate Donald Trump’s financial ties to Saudi Arabia. The latest controversy centers on a new golf tournament owned by Saudi Arabia’s sovereign Public Investment Fund, which is chaired by Saudi Crown Prince Mohammed bin Salman. LIV has paid millions to golf resorts owned by Donald Trump, who has publicly supported the new league which is attempting to compete with the PGA. Meanwhile, an exposé has revealed that the Saudi government infiltrated Wikipedia to control information on the kingdom. Government administrators were recruited to edit the crowdsourced site in ways that portrayed Saudi Arabia in a positive light, and two noncompliant editors who contributed critical information about political detainees were themselves prosecuted and imprisoned. The Wikimedia Foundation, the parent company of Wikipedia, appears to have banned 16 Saudi users for “conflict of interest” editing, yet it is unclear what additional steps they have taken to combat the Saudi government’s disinformation campaign. We speak to Sarah Leah Whitson, executive director of Democracy for the Arab World Now (DAWN), the organization that released the report on Wikipedia’s infiltration, who says that Saudi Arabia’s financial investments in American political leaders’ business dealings and deployment of government agents inside international organizations are key to its global project to conceal evidence of its human rights abuses.

The Justice Department and Congress are facing news calls to investigate Donald Trump’s financial ties to Saudi Arabia. The latest controversy centers on a new golf tournament which is owned by Saudi Arabia’s sovereign Public Investment Fund. The chair of the fund is Saudi Crown Prince Mohammed bin Salman. The new league has paid millions to golf resorts owned by Donald Trump, who has publicly supported the league, attempting to compete with the PGA.

REPORTER: Can you help me appreciate your decision to host this event?

DONALD TRUMP: Well, I’ve known these people for a long time in Saudi Arabia, and they’ve been friends of mine for a long time. They’ve invested in many American companies. They own big percentages of many, many American companies. And frankly, what they’re doing for golf is so great. What they’re doing for the players is so great. The salaries are going to go way up.

REPORTER: You’re so closely associated with the City of New York.

REPORTER: You, of all people, understand the passion surrounding 9/11. What do you say to those family members who protested earlier this week and will be doing so again on Friday?

DONALD TRUMP: Well, nobody has gotten to the bottom of 9/11, unfortunately, and they should have, as to the maniacs that did that horrible thing to our city, to our country, to the world. So, nobody’s really been there. But I can tell you that there are a lot of really great people that are out here today, and we’re going to have a lot of fun, and we’re going to celebrate, and money is going to charity.

AMY GOODMAN: The group Democracy for Arab World Now, known as DAWN, is leading the calls for Trump to be investigated. The group also made headlines recently after it revealed that Saudi government agents had infiltrated Wikipedia to control information about Saudi Arabia and imprisoned two Wikipedia administrators who posted content critical of the kingdom’s human rights record.

To talk about both and more, we’re joined by Sarah Leah Whitson, executive director of DAWN.

Welcome back to Democracy Now! It’s great to have you with us, Sarah Leah. Why don’t we start off with Wikipedia?

SARAH LEAH WHITSON: All right. What can I tell you?

AMY GOODMAN: Well, start from the beginning. When we turn to Wikipedia to get information, when we’re reading about Saudi Arabia, who’s in control of that information? Explain what you learned and the lawsuit that you’ve brought.

SARAH LEAH WHITSON: Sure. So, what we learned following the December 2022 ban by Wikimedia of 16 administrators and users in the Middle East is that they had apparently an infiltration by what they called external parties. We were able to piece together that the infiltration was by the Saudi government of administrators, users and editors who were based in Saudi Arabia and who were apparently editing, posting, deleting content relevant and important to Saudi Arabia in a way that promoted a positive image of Saudi Arabia and blocked information that appeared critical of Saudi Arabia.

What we also learned and pieced together was that two former administrators in Saudi Arabia had been arrested on the same day and ultimately — originally sentenced five and seven years in Saudi Arabia for what our sources tell us was their refusal to post propaganda for Saudi Arabia, and the Saudi government’s discovery that they had in fact posted critical information about the country. This all became much more apparent when, in September of 2022, a Saudi prosecutor increased the sentence of one of those Saudi administrators to over 30 years in prison. So, through this effort of research and investigation, basically, we were able to uncover how the Saudi government had pressured administrators and editors in Saudi Arabia to post flattering content and ban critical content about the country.

JUAN GONZÁLEZ: And, Sarah Leah Whitson, if these two administrators were arrested in September of 2020, what kind of publicity did this receive at the time? And did it take two years for Wikimedia to be able to figure out what was going on here?

SARAH LEAH WHITSON: Well, that is a question more appropriately directed to Wikimedia. All we know about the Wikimedia Foundation, which oversees Wikipedia, is that in December of 2022 they said that they had launched an investigation starting in January 2022 and that the result of that investigation was that external parties had created a conflict of interest — those are their words. They did not mention the arrest and imprisonment of these two Wikipedia former administrators. In a subsequent statement, after we put out our release, they did mention the two administrators.

But really, it’s not clear to us whether they have demanded that the Saudi government release them, or in any way assisted or supported these two former Saudi administrators. It would be very convenient for Wikimedia to wash its hands of this matter and to pretend that the arrest and imprisonment of these two men didn’t have to do with their work on Wikipedia, but that is clearly not true.

JUAN GONZÁLEZ: I’d also like to ask you — you’ve called on the DOJ to investigate the circumstances surrounding payments by Saudi Arabia’s sovereign Public Investment Fund to businesses owned by former President Trump. Can you talk about why you decided to make that call?

SARAH LEAH WHITSON: Sure. So, basically, on Friday of last week, just a few days ago, an attorney for the PGA Tours, which is involved in litigation against both LIV Golf and the Public Investment Fund, revealed the contents of a secret shareholder agreement, that, in fact, the LIV Golf is 93% owned by the Saudi Public Investment Fund, which is, in turn, controlled entirely by Crown Prince Mohammed bin Salman. This is the first direct link of direct payments, basically, by Mohammed bin Salman to President Trump for golf events that LIV Golf has hosted on a number of Trump resorts.

Now, under federal law, negotiations, business negotiations, with a foreign government are clearly banned for senior officials, including a president, while they’re in office, but there are no laws that prohibit such business dealings after they leave government. What’s not clear and what we believe the DOJ should investigate is the extent to which these negotiations, solicitations, etc., by Trump or his agents were conducted with Saudi Arabia and its agents while President Trump was in power.

But more importantly, the fact that there’s no law prohibiting a foreign government from paying a former president mere months after he leaves office, just like the $2 billion Saudi Arabia’s Public Investment Fund paid to Jared Kushner six months after he left office and the $1 billion they paid Steven Mnuchin, former treasury secretary, months after he left office, shows how weak our conflict-of-interest laws are and the dangers that this subjects our democracy to, given the fact that government officials can really just jump on the payroll of foreign governments minutes after leaving office. This has got to stop.

AMY GOODMAN: And what kind of support do you have, I mean, in Congress and other places for exposing this and for doing an investigation? And if you could weave that into what happened the last time we had you on, a federal judge dismissing the lawsuit filed by the fiancée of the murdered journalist Khashoggi, who wrote for The Washington Post, in the Saudi Embassy in Istanbul, in Turkey, him throwing out the lawsuit, granting MBS sovereign immunity?

SARAH LEAH WHITSON: Well, in terms of the congressional investigations that have been announced to date, former Congresswoman Carolyn Maloney and Senator Elizabeth Warren both announced that they were going to be investigating the payments to Jared Kushner’s Affinity Partners and to Steven Mnuchin’s fund for conflict of interest for the reasons that I specified. And we are very hopeful that those investigations will now be expanded to include the payments to the Trump Organization.

In terms of DAWN’s lawsuit against Mohammed bin Salman, which was recently dismissed because of the Biden administration’s recognition of sovereign immunity for Crown Prince Mohammed bin Salman, I think it just reflects a ceaseless pattern of favors, protection, all kinds of grants of favor, grants —

AMY GOODMAN: We have three seconds.

AMY GOODMAN: We’re going to have to leave it there, Sarah Leah Whitson of DAWN. I’m Amy Goodman, with Juan González. Thanks for joining us. 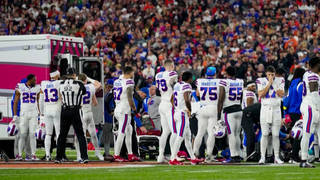