Is a Catholic priest who is on a “Caravan of Hope” across the United States to draw attention to the plight of Central American migrants traveling here through Mexico, and who are often deported back to Mexico into dangerous conditions. He received the 2012 National Human Rights Award from Mexico’s President Enrique Nieto for his work. He is the founder and director of Hermanos en el Camino (Brothers in the Road), a shelter for migrants in the southern Mexican state of Oaxaca. 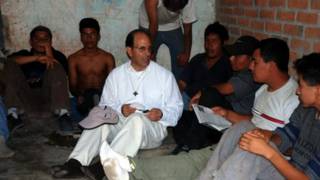