Former Israeli captain and Air Force pilot. He was one of the organizers of a 2003 letter signed by 27 Air Force pilots who refused to participate in Israeli military operations against Palestinians. Shapira has also signed onto the internal Israeli movement for Boycott, Divestment and Sanctions (BDS) known as “Boycott from Within.” 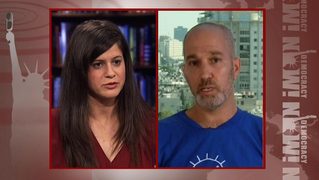 Audacity of Hope: Inside Report Aboard U.S. Ship’s Dramatic Challenge to Greek Ban on Gaza Flotilla

Debunking the Israeli-U.S. Effort to Thwart Gaza Freedom Flotilla: “We Are Committed to Nonviolence”

As Gaza Plunges into Darkness, Israeli and Palestinian Fighters-Turned-Peace-Activists Speak Out