Take Out an Advertisement

We live in a world of advertising. Because Democracy Now! doesn’t have corporate ties you rarely see our name around. However, ads are very influential, and with your help we can become more well-known.

Democracy Now! listeners at radio station KMUD in Garberville, Ca., printed an advertisement in their local paper to let others know that the program is now also available on television in their community.

Listeners and viewers carry banners and signs in parades, marches, on their bikes, in their cars, apartments, store windows, and on their lawns.

Use the graphic elements from our resources to get banners or signs printed at a local print shop.

One enthusiastic supporter even painted the side of their barn with a Democracy Now! ad.

Hold Up Signs at Your Local Busy Intersection

In many cities around the country listeners and viewers have gone out to their local busy intersections to spread the word about Democracy Now!

Many go out during the time the show is broadcast on the radio so that drivers can tune in immediately. Its really easy and has the same affect as a billboard. All you have to do is list the station, time of the broadcast and “Tune into Democracy Now!” Also be sure to include the website www.democracynow.org and keep a stack of flyers with broadcast times handy for those who show interest. 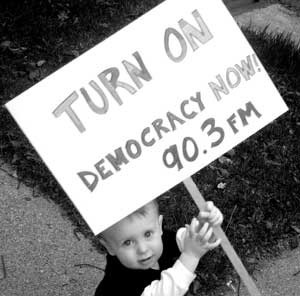 Make a DN! Float for Your Town’s Parade

After a successful campaign to get DN! on the air in Rochester, Metro Justice decided to start spreading the word about when the show airs in their town. On labor Day they created a float with air times and a Lady Liberty impersonator. You to can find unique and eye-catching ways to spread the word about DN! 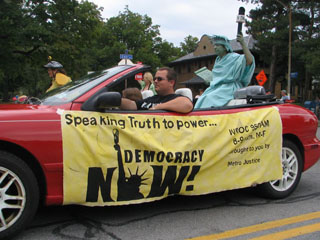 When you design your ad, banner, or sign be sure to include:

This lets people know not only about Democracy Now!, but also about the local community media station that airs the program. Our goal is to build community media around the country.

Also include that Democracy Now! is available on:

If you do advertise Democracy Now! send us a copy or photo of the ad!