On March 9th, FBI agents detained and questioned Major Tomás Ricardo Anderson Kohatsu, a retired official of Peru’s notorious Army Intelligence Service, also known as the SIE. Agents detained him at a Houston airport as he was on his way back to Peru.

Anderson Kohatsu has been implicated in the torture of former SIE agent Leonor La Rosa Bustamante in January and February 1997. At that time, Anderson Kohatsu was Chief of the Security Section of the SIE’s Counterintelligence Department. LaRosa was permanently disabled by the torture and now resides as a refugee in Sweden. She was tortured because the SIE believed she had leaked classified information to an opposition newspaper. It involved plans by President Alberto Fujimori to silence, threaten and attack journalists critical of his regime.

Anderson Kohatsu had been linked to horrendous crimes in the U.S. State Department’s annual human rights report. And the Organization of American States had made similar charges as well. The U.S. Justice Department reportedly wanted to charge Anderson Kohatsu under the 1992 Torture Victim and Protection Act. The act, which was never used, allows the U.S. to prosecute any alleged torturer, regardless of country of origin or where the crime occurred. But Thomas Pickering, the Undersecretary of State for Political Affairs, would not prosecute Anderson Kohatsu. The issue was reportedly one of diplomatic immunity. 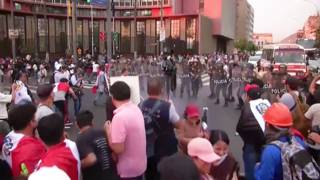