Manning Marable Speaks to the Greens

Ralph Nader made his first appearance as the Green Party’s presidential nominee this week surrounded by children at a Los Angeles housing project, where he blasted major party candidates George W. Bush and Al Gore for ignoring the growth in child poverty amid the booming economy.

Nader said that greater spending on education, a higher minimum wage and expanded child care are needed to combat child poverty. He accused politicians of failing to use the benefits of a growing economy to invest in programs for children, spending it instead on “corporate welfare” such as corporate tax cuts and subsidies.

This week on Democracy Now!, we have run excerpts of some of the speeches from the Green Party Convention in Denver, Colorado last weekend. Among the most fiery speeches of the weekend was a speech on Saturday by Manning Marable. 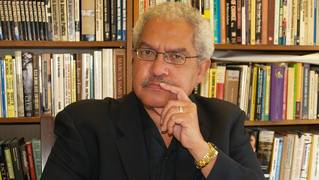