U.N. Accuses U.S. Ally Pakistan of Forcing Refugees Back to Afghanistan, in Violation Of International Law

A potential humanitarian disaster is unfolding in Afghanistan’s largest refugee camp as new arrivals from outlying villages pour daily into a camp already filled with more than 200,000 refugees.

At least 10,000 people have arrived at the Maslakh camp in the last two weeks from outlying villages, according tothe International Organization for Migration (IOM), which supervises it.

The latest arrivals have strained the camp’s limited resources and increased the risk of disease, hunger and exposureto the cold. A refugee worker said that there are many more thousands coming and that the camp was in an emergency.

We’re joined right now by Sarah Zaidi, who has just returned from refugee camps in Pakistan. She was shocked todiscover that Pakistan does not give Afghan refugees official refugee status, and regularly deports them. That is inviolation of international law.

The original content of this program is licensed under a Creative Commons Attribution-Noncommercial-No Derivative Works 3.0 United States License. Please attribute legal copies of this work to democracynow.org. Some of the work(s) that this program incorporates, however, may be separately licensed. For further information or additional permissions, contact us.
NEXTCommunity Radio Advocates Regain Control of Pacifica Network, As a Legally Binding Agreementis Reached to Transfer Board Majority Control 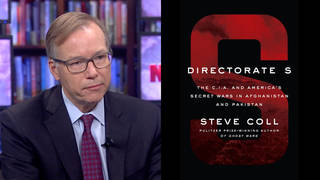