Racism and Gender: Where They Meet in Africa

The Conference Against Racism officially ended on Friday, but Democracy Now! continues the discussion on racism. Today, we look at issues of racism and gender, particularly in the context of gender and refugees. We look at the southern Sudan, where slavery is still alive and well. [includes rush transcript]

StoryApr 28, 2022Harvard’s Legacy of Slavery: New Report Documents How It Profited, Then Tried to Erase Ties

The UN World Conference Against Racism officially ended Saturday, but we continue our discussion of grassroots struggles against racism. Last week, I got a chance to speak with two women — one from Kenya, one from the southern Sudan — about refugees, racism. Agnes Nyoka Peter was with us from the southern Sudan, now a refugee in Kenya, with the Sudanese Women Christian Mission for Peace, and Atsango Chisonie from Kenya with the women’s development organization Akinamamawa Africa.

We’re going to start with Atsango Chisonie. I asked her how the issues brought up at the conference related to real-life experiences of racism in Kenya.

ATSANGO CHISONIE: Actually, one of the biggest challenges that we faced was just mobilizing around getting people from eastern Africa, because I traveled throughout the eastern African region in preparation for this conference to understand the relevance of the meeting.

In respect of Kenya, it wasn’t as difficult as with respect to the other countries, because Kenya is a settler colony. We had a — that means that we had during the colonial era British people that came and who had no intention of leaving. We had an apartheid segregation-like system in which Africans were ranked at the very bottom, Asian people in the middle, and white people at the very top.

So in terms of the classical narrow definition of racism, people understood what we were talking about. But people didn’t understand that you could apply the concepts of this conference, such as xenophobia and related intolerance, to issues such as ethnic conflict, a lot of which we have had in the country and we’ve had in the sub-region.

It’s when we use the broader definition out of the International Convention on the Elimination of All Forms of Racial Discrimination, CERD, to work with groups within the eastern African region that people began to really see actually this had a lot to do with their daily lives and issues which they really were not talking about and yet affected them every day.

There is also the issue of institutionalized and systemic racism, because under the system that we had in place originally, because we were considered to be at the bottom, African people had less access to education. African women in particular, for instance, were not allowed to study physics at the only high school that served African girls. So if you look at the proportion of African female scientists as compared in Kenya to African male scientists, and if you look at the proportion of those scientists as compared to non-African scientists, you will find that African scientists are in the minority, and women are, you know, in an even smaller minority, and so the — a lot of issues around how we now have institutionalized poverty for those particular categories of people in the country.

Agnes Nyoka Peter, you’re with Sudanese Women Christian Mission for Peace in southern Sudan, though right now you are living in Kenya as a refugee. The name of the overall conference in Durban is the UN World Conference Against Racism, Racial Discrimination, Xenophobia and Related Intolerance. Do these concepts relate to you as a refugee from southern Sudan in Kenya?

AGNES NYOKA PETER: It relates to me as a refugee who have been staying in Kenya for ten years. There’s too much to talk on this conference on the side of refugee women and how the children are suffering. Especially in Kenya, we Sudanese refugees stay far from a place where it is a desert, and it takes us two days to come to a town, which is Nairobi. And from that end, you cannot see south, you cannot see east, you cannot see north, even central. We are just in a desert where we share water. You take a bucket of water in a day. And we don’t have traveling permits from the camps to the town. It takes us time to get these traveling permits. And when we are coming, every day, each day, a refugee is in a — put into a jail, because he doesn’t have a permit to come to town. And access to education is not enough as a refugee.


First priority, you see that we are mixed up with the Kenyans in the area where — especially where Turkanas are staying and the Sudanese are staying. And when you put the southern Sudanese and the Turkana, we look alike. So we still have that problem where to identify which is a refugee and which is a citizen of Kenya. We see that we both face the same problem as the Turkanas and the southern Sudanese who are in that area.

And also there’s conflict when we go to fetch water, we find out there’s ethnic conflict, tribal conflict which comes because of water share, who comes first, who gets water first.

And the other issue is about women. The rape is too much in the camp, no security for women, no security for girls, no security even for our children. When there is this conflict, the situation becomes worse. And the UN takes this as a chance. They don’t see things serious. It has become like a political issue within the UN compound. And it has become like economical issue. The refugee is being forced, at least you find out that refugees, we — if you are poor, then that means that you didn’t get anything.

How many people are in the UN-run camps in Kenya from southern Sudan?

AGNES NYOKA PETER: Every day we receive refugees coming in from southern Sudan.

Is the number in the thousands?

And how many camps are there in Kenya?

Can you talk about why you left the southern Sudan?

AGNES NYOKA PETER: The issue of southern Sudan is very difficult. And it covers a lot. So for me to mention it, it’s clear that why I left southern Sudan, because there is a war between the northerners and the southerners.

We hear in this country a great deal about slavery in the southern Sudan, and it is an issue of controversy here. Can you describe the situation?

What does slavery in the southern Sudan — how does it affect women in particular?

AGNES NYOKA PETER: This slavery affects us as like in the southern Sudan, we are the indigenous people of the Sudan. And it has become that we are divided now. We are in the southern Sudan. And slavery is taking place, and it has affected many of us. As I’m talking to you now, our children and our women are being taken from the — they are being displaced from their homes because of slavery, and they are being bombed and then scattered from all over. So you don’t find your ways. You end up being taken as slaves, and at the end of the day family don’t meet together. Family reunion becomes very difficult, and it keeps on coming every day and every day.

Let me ask Atsango Chisonie of Kenya, you come from a country where you have a leader, Daniel arap Moi, who’s been in place for many years, known for human rights abuses, for — well, when — getting World Bank money and Western support, pocketing a lot of that, known for corruption, as well. How do you as a woman political activist deal with this, when it’s the voice of the government that’s represented at this world conference?

I’m going to interrupt this taped conversation that we’re having with two women, one from Kenya, one from the Sudan, Atsango Chisonie just answering this question, because of the latest news. 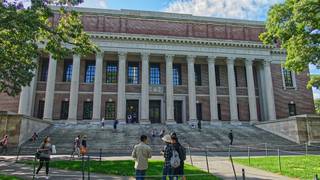 Harvard’s Legacy of Slavery: New Report Documents How It Profited, Then Tried to Erase Ties