A jury has convicted Muslim cleric and former Black Panther Jamil Abdullah Al-Amin, formerly known as H. Rap Brown, of killing one sheriff’s deputy and wounding another in a shootout in Atlanta in March 2000. Jurors deliberated 10 hours over two days before finding Al-Amin guilty of 13 counts, including murder, aggravated assault on a police officer, obstruction, and possession of a firearm by a convicted felon. Jurors will decide this week whether to sentence the Muslim spiritual leader to death, life with parole, or life in prison.

Al-Amin’s trial was postponed after September 11 because the judge feared anti-Muslim sentiment would taint the jury pool. His lawyers argued he is innocent of the shooting. They say Al-Amin’s fingerprints were not found on the murder weapon, and he was not wounded in the shooting, as one of the deputies said the shooter was. The deputy also said his eyes were gray. They are brown. His lawyers and supporters say it’s a case of mistaken identity, and that the government has been out to get him for several decades.

The original content of this program is licensed under a Creative Commons Attribution-Noncommercial-No Derivative Works 3.0 United States License. Please attribute legal copies of this work to democracynow.org. Some of the work(s) that this program incorporates, however, may be separately licensed. For further information or additional permissions, contact us.
NEXTMassive Protests Rack Argentina, Once the Darling of the International Monetary Fund 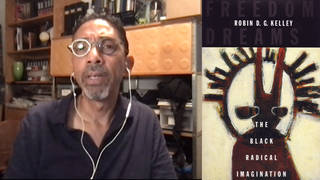