We go to Iraq to get a report from the ground in Baghdad and we speak with Iraq blogger and University of Michigan professor Juan Cole about the continuing bloodshed, the Iraqi constitution and the breaking apart of the US-led coalition. [includes transcript]

A large explosion rocked Baghdad yesterday bringing down an apartment building, shearing off the facade of a hotel and killing at least 7 people and wounding dozens.

The death toll had been reported as high as 27 but this morning the Pentagon lowered the toll to 7. Most of the casualties were foreigners from Arab countries.

Initial reports indicated the explosion was from a rocket attack. American officials later said it was a huge car bomb, estimated at about 1,000 pounds. The explosion destroyed a whole apartment block and wrecked the Mount Lebanon hotel.

The hotel is being described as a “soft-target.” It wasn’t well-defended, lacking blast walls, and didn’t appear to have much strategic value as it wasn’t popular with occupation officials or western contractors.

The attack is the latest in a wave of bombings that has killed more than 400 people in Iraq since February. On March 2nd, up to 271 Shias were killed in Baghdad and Karbala in twin bombings during a religious festival.

StoryFeb 18, 2020“Worth the Price?” New Film Shows How Biden Played Leading Role in Push for U.S. to Invade Iraq

AMY GOODMAN: We go first to Baghdad to Dan Murphy, driving to the site right now, a reporter for the Christian Science Monitor. Can you tell us what you know at this point, Dan, and what you see?

DAN MURPHY: Well, I’m not there at the moment, but obviously I have seen it and sadly, it is a pretty familiar sight. A huge hole in the ground, complete devastation both to the hotel and some family homes on either side of it. I don’t know what the breakdown of foreign Arab nationals verses Iraqis that were killed, but I have the number of the people who were killed that were just civilians in that neighborhood and the coalition is pointing the finger at people that are linked to al Qaeda again. But there’s very, very little precise information. Certainly they don’t have any suspects in custody.

JUAN GONZALEZ: Dan, we had reports that Iraqis were pushing away the U.S. soldiers who came to the scene? Any — is there any fact to that?

DAN MURPHY: Yeah. That happened. And something we’re seeing more and more of in general when these violent attacks happen. For instance, in your intro, you were talking about the attacks in Karbala. You know, immediately crowds turned on marines and pilgrims that were there for the religious festival. They were very, very angry at any foreign reporters that they saw and the soldiers. In general, when you have this sort of thing happening here now, people understand that the Americans themselves didn’t do it, but anger at the coalition and the American soldiers in particular coalesces very quickly because there is so much frustration and the anxiety that people feel. In the end, they attribute to the presence of the occupation.

JUAN GONZALEZ: And is there more of a buildup of security now as we’re approaching the first anniversary?

JUAN GONZALEZ: Yes. As we are approaching the first anniversary of the war. Does there seem to be heightened security throughout Baghdad and other parts of Iraq?

DAN MURPHY: I think there is heightened security, but, you know, it is already pretty high. I think we are seeing more and more of these types of attack and if you talk to people inside the military at the coalition, they are anticipating a ratcheting up of these sorts of events as we get closer and closer to the June 30 handover date, sovereignty to the U.S.-appointed governing council. While that date is largely a number, i don’t think much will be different on July 1. There is a feeling that there’s a large effort going underway to sort of discredit the U.S. presence amongst a significant portion of the Iraqi population at work.

AMY GOODMAN: Dan Murphy on the ground in Baghdad, Iraq, reporter for the Christian Science Monitor. On the line with us, Juan Cole, professor of modern Middle East and South Asian history at the University of Michigan. Runs a website where he gives a daily roundup of news and events in Iraq and elsewhere called Informed Comment. We welcome you to democracy now!

AMY GOODMAN: Can you talk more, put this bombing in context?

JUAN COLE: This is one of a long series of spectacular bombings in Iraq. We saw, as the Christian Science Monitor reporter mentioned, very recently a huge bombing in Kasmiah and Karbala, holy shrine cities of the Shiites in Iraq. There have been bombings in the northern city of Rabil. If you go back through the news reports, it’s one after another. This is — this is not a unique action. It is an unusually large bomb, 1,000 pounder. And similar to the one that was blown up in front of the United Nations headquarters last summer. But there is similar powerful bombs that have been set off in Najaf and elsewhere. So, there are groups, a number I think of groups inside Iraq who are pursuing this strategy of attempting to create an atmosphere of uncertainty and insecurity through these bombings.

JUAN GONZALEZ: And what about whole issue of the Spanish troops pulling out now or at least the promise of pulling them out. What has been the impact from the reports you are getting on the other foreign troops that are in the country, and the other foreign governments?

JUAN COLE: Well, my understanding is that the Polish contingent, which is responsible right now for sort of the middle south of the country, a Shiite area south of Baghdad, in which the Spanish contingents serve. The Polish contingent is disturbed by this development and the Spanish do do essential logistics work at Najaf and elsewhere in the south so that — I understand that it actually could — although the Spanish have a small number of troops, about 1300 in Iraq, it could have a significant impact on the Polish sector. And, of course, some other countries, Honduras, for instance, have already announced that they won’t keep their troops there past the summer and they just — they just have 300 or so. I think there is some concern in Washington that the Spanish desire to withdraw may spread to other of the ad hoc coalition partners.

JUAN COLE: Well, the basic law or interim constitution was hammered out in negotiations between the interim governing council that was appointed by the American coalition provisional authority and the Americans themselves and it contains a bill of rights that’s quite impressive. It also does make Islam the religion of state and enshrines the agreed upon certainties of Islam as sources of law in the country. It’s not entirely clear how the contradictions will be worked out between the Islamic tradition and the human rights traditions that are both present in this document. It does guarantee equal rights to women and it forbids discrimination. So, it’s a document of high ideals. But it doesn’t deal with a number of the most explosive issues facing the country. It doesn’t really specify what’s going to happen to the Kurdish minority, which wants a great degree of autonomy. Even if it pledges that Iraqi troops will never set foot on Kurdish soil.

AMY GOODMAN: The question of Syria and the Kurds that are rising up.

JUAN COLE: Yes. There were demonstrations yesterday in the northern city of Rabil in Iraq in favor of the Kurds in Syria. I’m not sure that the Kurdish disturbances in Syria should be called an uprising. They’re more like a soccer riot that turned into an ethnic conflict with local Arabs. But there is — there were sympathetic demonstrations of 5,000 people that came out in the streets in the north in support of their Kurdish fellows in Syria.

JUAN GONZALEZ: Professor Cole, I’d like to ask you. We have about a minute left. Going back to the constitution, a lot of U.S. military occupations in the past have rewritten constitutions to change especially land ownership laws and property laws. What’s this constitution say about issues like that, resource, ownership, and property ownership, etc.?

JUAN COLE: Well, you know, those sorts of details are not addressed in any specificity in this document. It does guarantee the right of private property. But how exactly that will work out and what it means is not specified. It is a constitution rather than a law or a statute. So, it is — you know, we know that the U.S. Government had been pushing Iraq to have a kind of Polish-style shock therapy to the socialist policies that had existed. That really hasn’t occurred very much just because it would require foreign companies to invest a lot of money in Iraq and the insecurity makes that unlikely at the moment.

AMY GOODMAN: Juan Cole, I want to thank you for joining us. Juan Cole, professor at the University of Michigan. Runs the website, the blog juancole.com.

“Worth the Price?” New Film Shows How Biden Played Leading Role in Push for U.S. to Invade Iraq 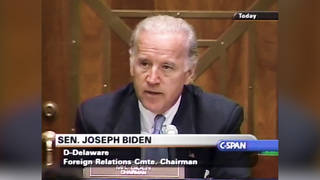 “Worth the Price?” New Film Shows How Biden Played Leading Role in Push for U.S. to Invade Iraq