Swedish-Iraqi filmmaker Urban Hamid, who was embedded with U.S. troops in Iraq for two and a half months, describes Iraqis being bound, hooded, humiliated and sexually abused by U.S. troops in neighborhood raids. The rarely-seen footage is broadcast on Democracy Now![includes transcript]

Michael Moore’s new film Fahrenheit 9-11 has been shattering box office record for a documentary and is being credited by some with boosting public interest in current events in Iraq. The film deals extensively with the build-up to the war, as well as the occupation as well.

In producing the film, Moore relied on a number of independent filmmakers on the ground in Iraq to get much of the footage he uses to paint a picture of the occupation. One of the filmmakers who provided Moore with some disturbing footage is in our studio today.

AMY GOODMAN: It’s good to have you with us. How long were you in Iraq?

URBAN HAMID: For that particular time, about two-and-a-half months.

AMY GOODMAN: That you have been there?

AMY GOODMAN: You were embedded with U.S. troops?

URBAN HAMID: Just for that particular time when I, you know, filmed the raids and whatnot. Otherwise, I have not been, and I’m totally independent.

AMY GOODMAN: Describe one of these raids. Describe where you got some of this graphic footage, and if you could graphically describe it — because we’re broadcasting on television and radio — so for those who won’t be able to see it now.

URBAN HAMID: This particular footage is from December 12. It’s shot in Sumara, which is part of what’s called the so-called Sunni triangle. And what you can see is, to me, extremely disgusting and horrible, because we can see how American soldiers go into a house early in the morning, and with no respect for the people, for the women, for the men. I think we can all sort of put ourselves into their shoes: what it would feel like if people came into our house speaking a foreign language with weapons and just sort of took over the house. I think we can all relate to that.

AMY GOODMAN: I’m looking at a man who has got a cane and he is trying to walk and has a hood over his head, and now a number of Iraqis who have something on their heads. What is it that has been put on their heads?

URBAN HAMID: Well, this is a plastic bag that they put over their heads, and it’s part of — as far as I’m concerned — the process of humiliating the Iraqis. I think we can all relate to what it would feel like to be totally isolated from what’s going on: not knowing what’s going on, just hearing the sounds of the American soldiers yelling orders in English, being pushed around. It’s just horrible. And I saw this. They were used, as you know, the whole time, even when they put people in Humvees and in trucks and in APCs. They put these hoods on their heads and they were — It must have been extremely difficult to breathe and whatnot.

AMY GOODMAN: How did you feel filming?

URBAN HAMID: I beg your pardon?

AMY GOODMAN: How did you feel filming?

URBAN HAMID: Of course, you are sick to your stomach, but you also know that you have to film, because this is something that everybody has to know. We have to know what our boys are doing in our names in Iraq. I felt that, you know, in spite of how sick and horrible I felt, I had to go on. I’m still dealing with this sort of trauma, of course: feeling that I couldn’t do anything, and I’m hoping that in getting this footage out, people are going to get as outraged as I was and try to stop this.

AMY GOODMAN: You have very humiliating pictures: how the soldiers are dealing — sexual abuse of prisoners. Can you describe that?

URBAN HAMID: It’s basically when U.S. soldiers touch the penis of one Iraqi man. He’s hooded, he’s on the stretcher, and totally powerless. I think we can all, you know, relate to what it would feel like to be in such a position, not being able to do anything, and, you know, totally —

AMY GOODMAN: Why are they doing this?

AMY GOODMAN: This is some of the footage that Michael has in his film, “Fahrenheit 9/11.”

AMY GOODMAN: Did you try to give it to the networks?

URBAN HAMID: Oh, yeah. I came to the States mid-February until mid-March and, you know, we sent out lots and lots of press releases, and nothing.

AMY GOODMAN: What do you think has changed? Now they’re showing the photos of Abu Ghraib.

AMY GOODMAN: We’re talking to Urban Hamid, who is an independent filmmaker, provided some of the shocking footage in Michael Moore’s new film, “Fahrenheit 9/11.”We’re talking about humiliating sexual abuse of men. Yanar Mohammed, we don’t hear as much about women. What about women?

YANAR MOHAMMED: Actually, there were many women lawyers that went into the jails and I received an invitation to go to that jail, but I was afraid to go, because I had a previous encounter with U.S. soldiers, and I was about to be detained also. Come to think of it, I could have been there, but later on, in the reports that we received, there were confirmed cases of around six to seven cases of women who were abused. Three of them were released later on to go back to their city of Ramadi, only to be killed by their parents later on because the family honor has gone. So, from one side, it’s rape from the U.S. soldier, and from the other side it’s honor killing by their parents. It’s confirmed that these seven cases were abuse, and some of them were in fact impregnated. We know for sure that one of the women was raped by seven Iraqi policemen while the U.S. soldiers were watching. She went back to her cell. She fainted. It was 48 hours before she woke up and told somebody about it. We saw the photographs over the internet. Until this day, we don’t know whether they are authentic photographs or not, because they are too shocking, too ugly, for us to believe. From our understanding, they were highly circulated among U.S. soldiers in Baghdad. I don’t know what sick person could look at those photographs and have fun. 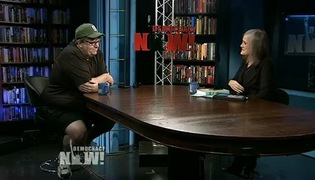