Feminist Pioneer Gloria Steinem: “Bush is a Danger to Our Health and Safety”

One of the issues that has dogged John Kerry on his campaign has been the issue of abortion. Pro-choice advocates criticize Kerry for publicly distancing himself from their cause with his recent remark that “life begins at conception.” While some Catholic bishops believe Kerry should be refused Communion for his support for legal abortions and access to reproductive healthcare.

This weekend in Boston, hundreds of people, including Congressmembers and activists turned out to celebrate Planned Parenthood. Feminist icon Gloria Steinem was one of the speakers who addressed the crowd.

GLORIA STEINEM: I know we keep telling each other how important this election is. But I think we can’t say it to ourselves and to everyone around us and to the nation enough. I am an old person. And—I’m 70! Hello?! I want a little dignity here. [cheers] (applause). It’s time! Isn’t it time? (applause).

And I have never in my life, in a long life of caring deeply about elections, ever since my mother used to say to me when I was very little girl, she, whenever she heard Franklin Roosevelt’s name, tears would come to her eyes. And she would say we were so poor and he helped us. And it made me understand that government is connected to us or should be connected to us and truly can make a difference. Never since then have I felt that there was an election of this kind of importance. We—(applause)—we understand, those of us in this room, that reproductive freedom is not a single issue. It is a fundamental human right. Whether or not women have reproductive freedom and men, too, we should remember, because for men, men from racial and ethnic minorities have been subject to forced and coerced sterilization, you know, this is a right that includes all of us, that this fundamental human right is something that determines then entire rest of our lives. This determines whether we are healthy or not, whether we can be educated or not, what our incomes are, whether we have power over our own lives. There is nothing more fundamental than the idea that the government does not have a right to decide when and whether we have children. Only we have that right. (applause)

But because I understand that the that it’s, you know, important to be positive because I realize that Bush is accusing all of, you know, he’s getting on television and saying—I’m just looking at friends… I think that, you know, we all understand that it’s fundamental and also that indicates a world view. It happens that whether you support reproductive freedom or not is the single biggest indicator of what your position is on the environment, what it is on capital punishment. It is the world view. And since the idea is to be positive and not leave for candidates and so on, part of the heart of Bush’s campaign is you’ve seen this ad that says, “Pessimism neither recreated a job.” Well, neither did Bush. [cheers]

He’s lost millions of jobs. And since I’m not running for office, I thought I would take it upon myself to remind us of a few of the health issues that go with reproductive freedom. This is from a little people’s indictment that I have made of Bush. I tried to make it funny, but it was not possible. Ok. This is count six: Bush is a danger to health and safety. He turned Texas into the most polluted state in the United States or Canada and is now doing the same for the nation. For example, he has opposed 200 environmental and public health laws, weakened the Clean Water Act that has been supported by six past administrations, lowered standards for mercury in food and arsenic in drinking water, abandoned the campaign pledge to regulate carbon dioxide emissions and in the last three years presided over an unprecedented decline for meat, seafood and drinking water. He has also increased the need for abortions, increased the number of unsafe births, and he has increased population pressure on then environment because he has opposed sex education, family planning and emergency contra exception. This last, as we know, against the advice of his own experts. AIDS education has been put under the influence of religious extremists. At the same time, eight out of 10 working families have no health insurance, the number of patients forced into emergency rooms has increased, thus health costs are transferred to the taxpayer, and Bush opposes penalizing corporations for creating these health hazards. Therefore, to a great degree than any other president, he bears responsibility for the following: One in three Americans gets cancer. As you can see why they doesn’t want me speaking at the—[laughter] — he’s just giving a cancer! But he is giving a standard. —as other diseases are skyrocketing in children, seven out of 10 Americans have at least one chronic disease and one in five is living with two or more chronic illnesses. And this last group with two or more chronic illnesses has increased 20 million people over predictions, even, in the last year alone. So I repeat: Bush is a danger to our health and safety. [applause]

I can think of no—of no group that is more effective in this election than Planned Parenthood because of the trust level that people feel for it and because I am sorry to say, for a long time, the trust in politicians and political campaigns has been diminishing. Therefore, the message about what Bush’s real positions are and what the impact of those positions is on your and my daily lives, is best given out by people with this kind of credibility and Planned Parenthood is unique in having served one out of four American women and having an over 80% trust rating. So—I—(applause)—I hope you will just kind of think how you would feel the morning after the election on November 3, if we didn’t win. I mean I don’t want to even say it—[moaning]—ok, but just think about it and then take that feeling and use it now to give more money, to give more time, to get more voters out, to get more out and then we will come back here for one hell of a victory party! [cheers]

AMY GOODMAN: Gloria Steinem speaking last night in a celebration of Planned Parenthood on the eve of the Democratic National Convention, also there with Peggy Kerry, the sister of John Kerry, who has long supported Planned Parenthood. This is Democracy Now! Breaking with Convention. 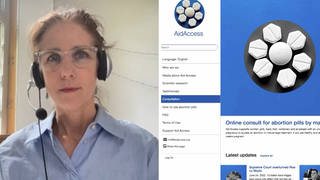