Another person who was not invited to speak at the convention was California Congressmember Maxine Waters, who has been very outspoken in her criticism of the invasion and occupation of Iraq and the Patriot Act. [includes rush transcript]

AMY GOODMAN: Another lawmaker who was not invited to speak was Los Angeles congress member Maxine Waters. She’s been very outspoken in her criticism of the invasion and occupation of Iraq, like Feingold, as well as the PATRIOT Act.

AMY GOODMAN: Are you going to be addressing the convention?

MAXINE WATERS: No, not at all.

MAXINE WATERS: I’m just kidding with you. I don’t know what that means except no, I’m not going to be addressing the convention.

AMY GOODMAN: What determines who gets to speak and what time?

MAXINE WATERS: Oh, well actually it’s determined by a lot of the inside politics. Who endorsed the potential nominee early? Who’s been going to all of the meetings, saying all of the right things and, you know, buying into, you know, what you are supposed to buy into. I just haven’t done anything, haven’t done any of that. I want to be free.

AMY GOODMAN: We caught up with California congress member Maxine Waters with her two grandsons on the first floor of the Fleet Center by radio row. I asked her to expand on the crackdown on dissent inside the halls of the Fleet Center.

AMY GOODMAN: Do you feel a lot of pressure to being, cracking down on dissent within the Democratic Party, here no dissent on the democratic platform, people on the floor having peace delegate kerchiefs taken away, confiscated because they don’t want those kinds of signs?

MAXINE WATERS: I think the Democratic Party has long since been a party of debate. But neither has the Republican Party. I mean, I don’t even fight about the platform any more because we don’t even attempt to have a platform that speaks to all of the diverse issues. The platform now is simply performa. It is something that is done as a relic of conventions. But it doesn’t mean anything. And so no, there is no dissent. There is no debate. It’s, you know, they want to send the message of a happy party, everybody’s getting along, people are singing and dancing in the aisles. And I suppose it is what it is. And that’s all it is.

AMY GOODMAN: Congresswoman Maxine Waters at the Fleet Center. Not one of the speakers. One of the things she did was participate in a forum around Haiti and the ouster of Jean-Bertrand Aristide. In fact, as the convention was going on here at the Fleet Center in Boston, in Port-au-Prince thousands of particularly students were protesting. Some of them were talking about calling for support for Senator John Kerry as President here in the United States, thinking a change of government in the United States could mean that Jean-Bertrand Aristide, ousted in a U.S.-backed coup just a few months ago, could return to Haiti. This is Democracy Now! 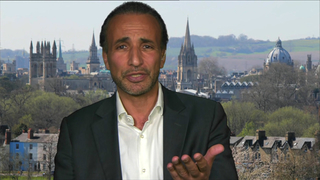