Swedish-Iraqi filmmaker Urban Hamid, who was embedded with U.S. troops in Iraq for two and a half months, describes how young, American soldiers are driven to abusing and humiliating Iraqi detainees. [includes rush transcript]

Michael Moore’s new film Fahrenheit 9-11 has been shattering box office record for a documentary raking in over $60 million despite a limited release in theaters last weekend. The film deals extensively with the build-up to the invasion of Iraq, as well as the occupation.

In producing the film, Moore relied on a number of independent filmmakers on the ground in Iraq to get much of the footage he uses to paint a picture of the occupation including scenes of young American GIs conducting nighttime raids and humiliating Iraqi detainees. One of the filmmakers who provided Moore with some disturbing footage joins us again in our studio.

AMY GOODMAN: We’re also joined in the studio by Urban Hamid. He is an independent filmmaker, photographer, and was embedded and unembedded. A reporter, a photographer who was Swedish-Iraqi. He joins us in our studio in New York. He provided some of the footage to Michael Moore for “Fahrenheit 9/11”, of the abuse of Iraqi prisoners and the raids, the U.S. soldiers touching the genitals of an Iraqi prisoner, posing for pictures. But in your time of being embedded, as you listened to Nadia McCaffrey, what did the soldiers, the U.S. soldiers say to you? Who were you embedded with, Urban?

URBAN HAMID: I was embedded with Charlie Company, and we were outside Balad, which is very close to Samarra. And they would come up to me and basically express, you know, similar thoughts as Patrick did with his mother, how they didn’t know why they were there. They wanted to go home. They missed their family. Their conditions are extremely tough. That they are living under. And you know, I — so much of what Nadia is telling about her son really resonates with what I heard and saw.

AMY GOODMAN: Now, you describe and you filmed the — a detention facility right on top of the roof of where the soldiers stayed. Can you describe that?

URBAN HAMID: It was basically just a — maybe 15, 16 square feet area that was fenced off by this razor wire, and, you know there was no protection against the sun, no protection against the rain, and the soldiers said that they would keep the detainees up there, and nobody would — you know, last that long without — within a few days, they would start talking. That was a way of softening them up.

AMY GOODMAN: As an Iraqi yourself, how did the U.S. soldiers respond to you being embedded with them?

URBAN HAMID: They knew me only as a Swedish journalist. But, you know, this — this is not a matter of being Iraqi, or Swedish. I think it’s a matter of being a human being. We all know what is right and what is wrong. And this was definitely not right.

AMY GOODMAN: You say that soldiers expressed concern. What were they saying?

URBAN HAMID: I remember one of the last conversations I had was in January, and a sergeant was basically telling his fellow soldiers that, you know, I understand why the Iraqis hate us. He said that, you know, we have all been duped, and we know that and, you know, we should not be here in the first place. And the interesting thing was that he was talking to about four or five other soldier, and they did not disagree. They were all listening to him. And I think that he — to me, he represents sort of the kind of concerns and objections that many, many soldiers in Iraq have, many American soldiers have.

AMY GOODMAN: I want to thank you, Urban Hamid for joining us once again. I hope to continue this conversation with you before you return to Iraq. 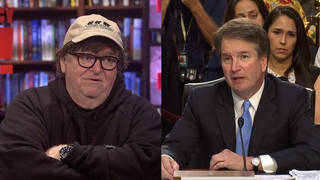