A look at the life of “Big Black” who was tortured during the Attica prison massacre of 1971 and became the leader of a 26-year court battle by former prisoners against the state of New York. He died on Saturday. We talk to his attorneys and friends Elizabeth Fink and Daniel Meyers. [includes rush transcript]

“Big Black” died this weekend. His real name was Frank Smith. He was one of the prisoners who rose up at the Attica prison in 1971. He was 71 years old. The rebellion began on Sept. 9 as a protest against jail conditions and ended on Sept. 13 as one of the bloodiest days in the 20th century in the U.S. Troopers shot indiscriminately over 2000 rounds of ammunition. 39 men would die, 29 prisoners and 10 guards. After the shooting stopped, police beat and tortured scores of more prisoners. 90 of the surviving prisoners were seriously wounded but were initially denied medical care. And the state would originally claim that all of the guards had died at the hands of the inmates. The New York Times reported on its front page the throats of all of the guards were slashed. But it was lies. The guards had been shot dead during the raid.

AMY GOODMAN: In a moment, we’ll be joined by Liz Fink and Daniel Meyers who were close friends of Frank Smith, as well as his lawyer and his colleague. They were lawyers for the Attica Brothers. Liz Fink, Attica Brothers legal defense, a mass defense established shortly after the killing. She began working there in 1974, but first we’re going to just play a clip from “Ghosts of Attica.” It’s a film from Lemir Production that was done for Court TV. The story is told by Big Black and Liz Fink, who served as the lead counsel for the former Attica prisoners in the Civil Rights case.

LIZ FINK: I heard the helicopter. The helicopter said, “lay down, put your hands on your head. You will not be harmed.” I complied. They had us boxed in, and they were shooting down at us. I literally couldn’t fall. I couldn’t fall. Do not harm the hostages. Surrender peacefully. You will not be harmed. I remember an inmate said this guy is bleeding. He’s bleeding. I didn’t know he was referring to me. We just feel that everywhere you looked around, all you seen was shooting and everything. People laying all over now. They’re in the yard now. They got control. The state troopers just took their clubs and beat them down the stairs. Broke people’s legs, hit them on the tibia and broke tibias. On their back, on their head, in their genitals, on their front, you know, wherever they could hit them that’s where they beat them. I’m telling you, my name is being called where is Big Black? Where is Big Black? Get up, Black, get up? He busted me with a nigger stick a pickaxe and got a .38 in his hands. I gets up, he bam in my side, in my back, made me run with my hands on my head over to the side. Before I got over there, two or three more correction officers with him now and everybody is hitting me. Lay down. And now he made spread eagle on the table. Here I am laying down looking up at the catwalk and cigarettes and spit and shells after they shoot their guns, they’re dropping them down on me. I’m there with the football up under my chin. That football better stay there. If it fall, you will die sooner than you expect to die. I’m not in charge now. You know, I’m back today reality. They’re going to show you humiliation that they doing to me, everybody in the yard. The security chief, what do you got to say about it now? They got mad, wanted to teach a lesson to the third world population. And they let all of this evil go down. You have at least 88 people who are shot so severely that they need immediate surgery. It was absolutely no preparation made to treat the inmates. No blood, no plasma, no bandage, no fluid, no painkiller, no surgical, nothing, nothing, nothing, was done. L.D. Barkley was shot. He was shot went through and it collapsed his lung. He couldn’t get medical treatment. He bled to death.

AMY GOODMAN: That was Liz Fink in the film “Ghosts of Attica.” Liz Fink joins us in our studio. Again, she was a lawyer who started with the Attica Brothers legal defense mass defense organization in 1974. Danny Meyers, as well, a long-time friend and colleague of Big Black who died this weekend. As we talk just now as the film was playing, we’re trying to figure out how old Big Black really was when he died. 70 or 71,

AMY GOODMAN: Danny Meyers, why is it so hard to figure out?

DANIEL MEYERS: Well, for me, his happy birthday was April 1st, 1933, and it wasn’t until recently that there was any record of his actual date of birth, and for me that was very significant because slaves in the United States had no recorded births. I was going back to the narrative of the life of Frederick Douglass, in which his opening chapter says, he can only guess as to his show 8/3/04 show 8/8/04 of birth. He could only guess as to the location, and in some instances, they could only guess as to their parents. Frank Smith was born in the fields of Bennettsville, South Carolina. His mother was picking cotton, and up until about a year or so ago, there was no record of his birth. The other part of that that’s so amazing and what made him so significant to us is that he was only one generation removed from slavery. His mother’s family were slaves. His mother was an indentured servant, if you will, in the fields of the south and migrated to the north.

AMY GOODMAN: Liz Fink, can you talk about Big Black’s significance, what happened to him in 1971 in Attica, and how you worked together over these years. It’s hard to just call him one of the prisoners, because in fact, he almost became colleague as a lawyer working on the longest case in New York history.

LIZ FINK: He was my partner. Not only we worked–we were not only on the Attica prison rebellion, which we always did all of those years, but we also practiced law together, and I would call my partner and he would somewhat get upset because he didn’t have a degree. But I say he had a PhD in life. You know, al of us had PhD in books, but he was smarter than the rest of us. He transformed all of us, right because we had a deal with how smart he was and how brilliant he was in people and how much love he had for him. And his ability to get people to love him and to–get people out of difficult situations. And people recognized this, and that’s why he was chosen to be head of security in the five days when his job was to make sure that everything went okay and to guard the negotiating team. Then he was selected out for the most significant of the torture, and he was kept on that table that you saw for six hours. He was burned with cigarettes. He was beaten, in any number of times.

AMY GOODMAN: This is by the state police.

LIZ FINK: September 13th. The he was indicted in for indictments because what happened was that rather than investigate the real criminals, which were the state police and the people who killed everybody, and the correction officers who tortured everybody, they indicted 62 inmates on 42 indictments, the largest series of indictments in the history of the state of New York. There were six trials, five acquittals, one conviction. Black was charged in four indictments, right, all of those charges were dropped. They were dropped for lack of evidence. And there were these unbelievable hearings where people came up, testified how they had been forced to lie about him and rather than let this unbelievable experience destroy him, right, he took it and of course, he had enormous residue from being tortured, but he took it to take the love and the feeling that he had for everybody, and to have as his goal to make everybody see that Attica is all of us. That was his main thing, that the prisons are just society. They’re another–we do to people in prison what they do to people in prison, it’s just the same thing as happened out on the street.

AMY GOODMAN: We only have 15 second. The connection between Attica then and Iraq prison today, Dan Meyers.

DANIEL MEYERS: He was very conscious of this. In my last visit in May of this year, he was aware of -

DANIEL MEYERS: He was aware of the torture that was going on by U.S. forces in Iraq, and was very upset and angered by it. 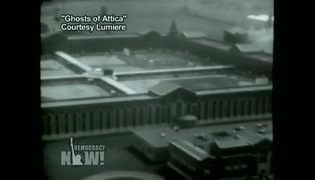