The New York police have charged four activists with two felonies for hanging a banner last week because a police officer was injured while reporting to the scene. Their attorney has accused the police of trumping up the charge in order to scare off future demonstrators. [includes rush transcript]

On Thursday, in one of the first protests against the Republican National Convention, four activists dropped a huge anti-Bush banner from the Plaza Hotel.

The banner drop went off without a hitch.

The four activists were arrested. They expected to face minor charges.

But the four now face two Class D felony counts and up to 25 years in jail. The police charged them with assault because a police officer stepped in a skylight and cut his leg while responding to the crime.

The New York Times reports that in March the Police Department instructed officers under certain circumstances to consider charging protesters during the convention with second-degree assault if any are injured while trying to make arrests.

Their attorney Gerald Lefcourt said he had been defending protesters since the Vietnam era and had never seen an assault charge applied in a similar situation.

He told the New York Times “It is really a bogus charge, probably to try to scare off future demonstrators…. Assault requires an intent to cause injury and taking steps to cause that injury”

We are joined now in our studio with Terra Lawson-Rember, one of the four activists involved in the banner drop action.

JUAN GONZALEZ: We’re now joined in our studio by Tara Lawson Reamer, one of the four activists involved in the banner-drop action. Welcome to Democracy Now!.

TERRA LAWSON-REMBER: Thank you very much.

AMY GOODMAN: Tell us exactly how it happened. We know that the mayor concerned that by demonizing protesters that people would be afraid to come to New York, so he then started offering protesters a discount in hotel rooms as well. Did you get a discounted hotel rooms at the plaza?

TERRA LAWSON-REMBER: No. I wish. Actually, I’m a native here. So —

AMY GOODMAN: You got a room at the Plaza, though?

TERRA LAWSON-REMBER: Yes, we did. We were really thinking about the fact that the republicans were coming to New York, a attempting to use our city to — I mean, as the New York Times sometimes said this morning, “Beginning a week in which the party seeks to pivot to the center and seize on street demonstrations to portray Democrats as extremists as they repeatedly remind the nation of the September 11 attacks.” We thought that strategy was completely unacceptable because we know that the Republican Agenda did not represent the American agenda, so we looked at the plaza as a — as an icon of New York that weigh could reclaim for our — to really get a message across that was much more on point with what we think America is all about.

JUAN GONZALEZ: How exactly did you lower the banner?

TERRA LAWSON-REMBER: Well, we — as Amy mentioned, we had a room and we went up to the roof. The door was open and set up an anchor system up there. Extremely safe anchor system. We were all very — had done a lot of rock climbing and that kind of a thing. We know a lot about anchors. Two of our team stayed on the roof to make sure that everything stayed safe and to speak with the police if and when they arrive two of us rappelled down the front of the building. I was on stage left and another climber, David, was on stage right. We went down to the front of the building and set up the safety systems along the way. And then deployed the banner once we measured beforehand and purposely knew exactly the dimensions and when we got to the calculated point, we displayed the banner.

AMY GOODMAN: You unfurled it?

AMY GOODMAN: What happened to the cop?

TERRA LAWSON-REMBER: The police officer — I was not there, because i was hanging from the rope, unfurling the banner at the time. One member of our group her name’s, Becky Johnson, was actually sitting above my anchor system making sure that I was safe, and when the officer came onto the roof, he — she specifically asked him she said, you know, you really should call the team of officers that’s trained to deal with this the emergency medical services, because you’re not really trained to be here. It’s not really safe for you to be in this place. He didn’t listen to her. And he proceeded to walk around the roof, and stepped — stepped in a skylight. That’s essentially what happened after we had been there.

JUAN GONZALEZ: He fell through the skylight?

TERRA LAWSON-REMBER: He did not fall through. His leg went through.

TERRA LAWSON-REMBER: He required stitches. I want to say on behalf of all of us who were involved in delay deploying the banner that we really are sorry and that the — the police officer injured himself, and we wish him the best, but clearly, that is not — we weren’t the perpetrators of that.

AMY GOODMAN: So, now, you face — you have been charged with a felony?

TERRA LAWSON-REMBER: Yes, we have actually been charged with two felonies? It

AMY GOODMAN: They are—

TERRA LAWSON-REMBER: The assault and reckless endangerment and both are obviously totally politically calculated, bogus charges.

AMY GOODMAN: Do you think that the banner-hang was worth it?

TERRA LAWSON-REMBER: : It was incredible. There’s no question in my mind that it was absolutely necessary for to us try to speak to middle America, to people who are not in New York to say, no, the demonstrators are not some extremist group as the republicans are going to try to portray us. We represent mainstream American values. I think there’s doubt out there in the minds of voters. The purpose of this is to crystallize this to say that we all know that Bush and the Bush and Cheney administration have been lying to Americans, and that’s just not acceptable in the presidency.

JUAN GONZALEZ: There’s no doubt as a weekend image, the words and the arrows went across the world, and they reached quite a few people who were not in New York city. 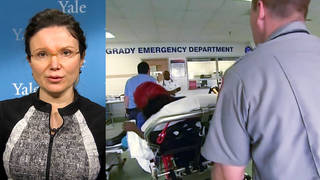