Tsunami Warning Systems: Why Didn’t Scientists Notify the Press About the Impending Disaster?

We speak with Australian journalist Peter Symonds about the lack of warning systems in Asia that could have prevented tens of thousands of people from being killed in the tsunami disaster. [includes rush transcript]

The death toll of the Dec. 26th tsunami disaster continues to grow and now stands at 155,000 people killed across 11 countries. The World Health Organization estimates more than half a million people are injured and in need of medical care and fears are growing that diseases such as cholera and malaria would break out among the five million people left homeless.

Children are the biggest victims of the disaster, making up a third of the dead. U.N. officials said they are worried that thousands of orphaned or lost children might be falling prey to criminal gangs bent on selling them into slavery, adding to worries about a “tsunami generation” of children also under threat of disease and hunger.

Across Europe today, millions of people observed a three-minute silence to remember those killed. The German stock exchange stopped trading, cars remained motionless in the streets of Stockholm, mourners stood shoulder to shoulder in Paris and flags flew half-mast in the UK.

Meanwhile, Secretary of State Colin Powell traveled to Indonesia today where he took a two-hour helicopter tour of Aceh. The death toll there stands at nearly 100,000 people–two thirds of the total casualties. Powell told reporters “I have never seen anything like this.”

After his tour of Aceh, Powell left for Indonesia’s capital Jakarta where U.N. Secretary-General Kofi Annan and other world leaders were arriving for a global relief summit on Thursday. Among issues to be discussed will be the implementation of a regional tsunami warning system. Thailand’s top weather forecaster was fired for failing to issue a tsunami warning out of fear it could harm the tourism industry.

AMY GOODMAN: We go now to Australia to Peter Symonds. He is a journalist based there, wrote an article for the World Socialist Website that analyzes the warning systems in Sri Lanka, Thailand, India, as well as Indonesia. We welcome you to Democracy Now!

AMY GOODMAN: It’s good to have you with us. Can you talk about the problem of the early warning system and why it didn’t function?

PETER SYMONDS: Well, I think the basic problem is that there wasn’t an early warning system in place in the Indian Ocean. There is an early warning system in place for the Pacific Ocean, which is able to detect earthquakes, has a series of tidal sensors and deep sea sensors which track the development of the tsunami and is able to issue timely warnings to nations which surround the Pacific Ocean. The real problem is that in the Indian Ocean, no such system is in place, and as a result, the indications of the formation of the tsunami were either misread, were ignored in some cases where — in the case of the Indian air force where they knew they had lost an entire base in the islands and had a four hours warning, that a tsunami was heading towards the Indian subcontinent failed to act on it. While certainly individual officers and individual meteorologists, individual officials are responsible for this, the main problem is that there was no system in place at all. The issue is why.

AMY GOODMAN: We’re talking to Peter Symonds, who is speaking to us from Australia. You also raise a very interesting question in your article, the Asian Tsunami, why there were no warnings, about the media, and about the U.S. geological survey, and their attempts to get in touch with countries, and governments when they realized what was taking place.

PETER SYMONDS: Well, I think that, certainly, there were all sorts of attempts that were made by the Pacific Tsunami Warning Center to get in contact with all sorts of people whether they were diplomats, officials in governments, certainly they could have also contacted the media as well. But there was a basic scientific problem. They had registered an earthquake of very significant size initially, a size that was 8 on the Richter scale. The problem was that in the Indian Ocean, as opposed to the Pacific Ocean, they had no means of determining whether this earthquake was going to create a tsunami. So, it was a degree of guesswork involved in that. Later, something like an hour later, they upgraded their estimate of the earthquake to 8.5, and in the alert which they issued then, they were able to indicate that a tsunami was possible. But the problem was they still didn’t have the sensors in place in order to determine where it was in fact heading, and you know, was in fact traveling towards the Indian subcontinent. Certainly, more could probably have been done in terms of alerting people in these countries through the media and through various other means, but the real issue, you know, is why they weren’t able to ascertain within any degree of certainty that it was actually taking place.

PETER SYMONDS: Sure. But I don’t think that the primary responsibility should be placed on the scientists at the Pacific Tsunami Warning System. You know, the real responsibility rests with governments, you know, who failed to put in place what is being called for for years and years in some cases by these scientists themselves, the establishment of an effective early warning system in the Indian Ocean. I mean, certainly, they could have done more, but the problem is without an effective system in place, and we’re talking about a matter of hours, we’re not talking about days or anything longer than that, the problem is that without that in place, it is very difficult for them to predict what is taking place. Certainly, within a matter of minutes they were able to register the earthquake. Within a matter of 15 minutes, they were actually able to issue an initial alert, but they were not able to determine with any degree of certainty that a tsunami was forming. That takes further equipment, and further expertise which simply wasn’t in place.

AMY GOODMAN: But once it did form, and wiped out a portion of Aceh, the province of Indonesia where it’s believed about two-thirds of the victims are, those that were killed, they certainly had time for Thailand and then to say the least for Somalia, for Sri Lanka.

PETER SYMONDS: Sure. And you know, I’m by no means defending their actions, but, you know, what I’m trying to raise, and certainly what the article that I wrote for the World Socialist Website centrally raised was the fact that without any sort of planning, without any sort of system, without any sort of pre-education, this was a catastrophe waiting to happen. The chaos which resulted, and the lethargy and bureaucratic reactions in various places around the Bay of Bengal was a product of that. You raise the issue of Aceh, for instance. There was possibly half an hour between the quake and this terrible catastrophe which washed over and killed tens of thousands of people in Aceh. But as I reported out in the article, simple measures could have been put in place and they are in the Pacific, certainly, a system that is far from perfect, but even just basic education about what a tsunami is, what to expect, the fact that when water rushes out in the aftermath of an earthquake one can expect that a tsunami will occur, yet thousands of people, according to reports, were enthralled by the fact that the water was disappearing. Hundreds of kids, you know, following the water out only to find they were trapped, as this wall of water came towards them and engulfed them. So, a tsunami warning system, which has been pointed out by a number of scientists who have been preoccupied with this for years certainly involves science certainly involves the establishment of technical systems. It also involves the education. None of that was in place in the Indian Ocean. Even though some of the scientists in Australia, in Thailand, in Hawaii have been pushing for such a system for years.

AMY GOODMAN: Finally, just underscoring this point you raise about Thailand that seismologists there registered the Sumatran earthquake soon after it took place. In fact, the Thai meteorological officials were attending a seminar when the news came in, though ultimately deciding not to issue a warning according to the Thai newspaper Nation reporting that the danger of a tsunami was discussed but the gathering decided not to issue a warning, an official explaining to the Nation, “if we issued a warning which would have led to evacuation and if nothing happened, what would happen then, business would be instantaneously affected. It would be beyond the meteorological department’s ability to handle. We could go under if the tsunami didn’t come.”

PETER SYMONDS: Yeah. I think that’s very indicative of the sorts of pressures which have brought to bear on scientists and others who were involved in this area. It no longer becomes a matter of science, but it’s a matter of profit, and they’re subject to all sorts of pressures when it comes to making some sort of prediction. As a result, you know, considerations, you know, and they have since made comments pointing out that in the past, when they have made warnings and it hasn’t proved to be the case, they have been severely reprimanded and disciplined. Again, it underscores the point, you know, that the enormous difficulties they face in relationship to making any sort of accurate predictions are the result of the chaos. —

AMY GOODMAN: Are the result of —

AMY GOODMAN: Sorry. Are a result of — I interrupted you.

PETER SYMONDS: Um — and I suppose the main point that I was seeking to make in the article was that, you know, the fact that the early warning system had not been put in place is the product of the contempt which certainly governments in the region hold for masses of ordinary people. But above all, countries who can afford such a system to pay for a system blithely ignored it for years.

AMY GOODMAN: On that note, I want to thank you very much for being with us, Peter Symonds speaking to us from Australia. His piece appears on the World Socialist Website, www.wsws.org, “The Asian tsunami, Why There Were No Warnings”.

Shakeup: Doctors Without Borders Tells Tsunami Donors to Give to Other International Relief Efforts

NEXTShakeup: Doctors Without Borders Tells Tsunami Donors to Give to Other International Relief Efforts 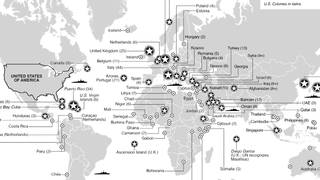