As UK Prime Minister Tony Blair rejects calls for an inquiry into whether the CIA secretly used British airports, Agence France Press editor Bernard Estrade joins us in our Firehouse studio to discuss the uproar in Europe over the CIA’s actions. [includes rush transcript]

In Britain — Prime Minister Tony Blair rejected calls on Wednesday for an inquiry into whether the CIA used British airports to transport detainees to secret prisons or to third countries where they have may have been tortured. Blair said,”I have absolutely no evidence to suggest that anything illegal has been happening here at all.” Blair added that he didn’t want to “add fuel” to stories about the practice of “extraordinary rendition”. Human rights groups have charged that hundreds of secret CIA flights have passed through Britain and other European nations. The British Association of Chief Police Officers, however, has begun an investigation after receiving information about certain flights that landed in British airports. Today we are going to look at the response in Europe to the recent disclosures that the CIA has been running a series of secret prisons overseas and the controversial U.S. practice of extraordinary rendition.

AMY GOODMAN: We’re joined now in our New York studio by Bernard Estrade, a chief editor of Agence France-Presse, which is based in Paris. Welcome to Democracy Now!

AMY GOODMAN: Well, in these few days you’re here in the U.S., it’s great to have you with us. Can you talk about how Europe is responding to this whole continuing revelations around what’s called extraordinary rendition, what others call kidnapping?

BERNARD ESTRADE: Well, first, Amy, allow me to outline that I am speaking here in my own capacity and I am not engaging my company in any way. To answer your question, yes, definitely, this extraordinary rendition and the jail had an incredible impact in all of Europe. It was quite amazing, and it’s quite amazing to realize that, if you had not been in Europe, it was major news, major front page news everywhere. For the European, you know, it was almost like the confirmation on an urban myth, you know, the urban myth that the CIA was snatching persons in the street, and then were sending them on black flights, you know, like the black helicopter somewhere in place where they were going to torture, and unfortunately, in the last few months this has been confirmed. It’s really happened, and that was devastating news and very, very important news in Europe.

AMY GOODMAN: Now, this information that the European countries were transit points, Britain, perhaps hundreds of times, Germany, countries that — well, Germany was opposed to the invasion. What about this? Now, Blair saying he doesn’t know of this and won’t investigate it.

BERNARD ESTRADE: Well, that’s probably a bit playing on the word, because, in fact, it’s quite easy to identify this black flight, were flying around, and they have already been published, you know. We knew, for example, that just over 340 of these flights went through Germany, a bit less through Great Britain. Two even go through France, and dozen through Spain. They were part of a normal flight between the U.S. and a European country and other destination. And they were identified as a CIA or intelligence flight. What was not sure, that was who was on board.

AMY GOODMAN: And what about Condoleezza Rice’s trip?

BERNARD ESTRADE: Well, Condoleezza Rice’s trip to Europe was supposed to be —- not to be dealing on this problem. And, in fact, during this standard trip, everywhere she has to face incredibly harsh questions from the public and from her interlocutor. Even at the NATO conference, you know -—

AMY GOODMAN: At the NATO conference, where was it?

BERNARD ESTRADE: At the NATO conference in Brussels, they were supposed to — the subject, the main subject was to talk about the next plan for Afghanistan. And, in fact, the main subject was always rendition flight and the jail, and especially the fact that jail had probably been set up, according to Human Rights Watch, in Poland and in Romania. That really didn’t go at all with European opinion. And the minister were a bit put on the wrong foot, because the government probably know very well what was going on. But it was impossible to accept that and to vouch for that for their opinion.

AMY GOODMAN: Now, the Washington Post exposed the story of these secret prisons in your Eastern European countries, but at the request of the Pentagon, they didn’t name them. Human Rights Watch has said Romania and Poland. Condoleezza Rice went to Romania. Can you talk about that?

BERNARD ESTRADE: Well, she went to Romania. Romania was not still a full member of the European Union, and she always said — she refused to confirm that this prison exists, but the problem is that for European, maybe wrongly, you know, this prison exists, and the denial of the Romanian authority were not really very credible, and as you know, the situation was so bad that the commission, the minister of justice of the European commission, has to remind all the countries that if they had agreed to let this kind of jail on their soil, they will not be able to be a full member of the European Union, and more specifically, they will not be allowed to vote.

AMY GOODMAN: Well, does this mean that the European Union will dissolve, because there will be no countries left?

BERNARD ESTRADE: Not dissolve, but they will not — the country who have let this kind of practice will not be allowed to participate in the vote. So they will be a member of the Union, but they will lose their right to vote.

AMY GOODMAN: But it sounds like there may be a number of these countries.

BERNARD ESTRADE: Well, up to now, there are only two countries who are supposed to have hosted this illegal jail. It’s Poland and Romania.

AMY GOODMAN: What about France and the United States? France was opposed to the invasion, but the, what you’ve called the Alliance Base?

BERNARD ESTRADE: Yes, that’s also a story that was first published by the Washington Post. The Washington Post this summer revealed that a special operation going on between France, the U.S. and other European intelligence service to fight against the terrorism. So the fight against terrorism is really a reality also for the European service, you know, and you have, let’s say, an operational facility who are put together between service, you know, to be efficient in this kind of struggle, concern everybody. But they are not accepted politically, and they are very touchy. And when our government are shown, they have to deny that it exists.

AMY GOODMAN: And in 30 seconds, what is it? What’s the relationship with France?

BERNARD ESTRADE: Well, Alliance Base was a program, was engineered by the French equivalent of the CIA, the DGSE, was supposed to find and, in fact, found one very supposedly terrorist who are living in Saudi Arabia and managed to trick him out of Saudi Arabia in France, and in France to arrest him and to give him back to the CIA.

AMY GOODMAN: I want to thank you for being with us. When you come here for the few days you have been here, is there a difference in the approach of the U.S. press and European press on this issue?

BERNARD ESTRADE: Yes, definitely. In the American press it didn’t seem to be a big issue. For the European press it’s an enormous issue. It’s a bit, you know — the same sensitivity in France that the sensitivity that the American public show when they heard that following this administration decision they could be domestically spied by the NSA. That’s provoked here a huge outcry, the same kind of outcry that the illegal jail in Europe provoked.

AMY GOODMAN: I want to thank you for being with us, Bernard Estrade, one of the chief editors at Agence France-Presse. 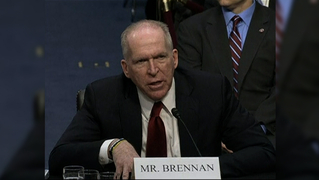