Central Intelligence Agency Director John Brennan is facing calls to resign after admitting CIA officials spied on a Senate panel probing the agency’s torture and rendition program. The allegation surfaced in March when members of the Senate Intelligence Committee openly accused CIA officials of illegally monitoring their staffers’ computers. The Senate report has yet to be released but reportedly documents extensive abuses and a cover-up by CIA officials to Congress. At the time, Brennan denied the spying allegations and said those who make them will be proved wrong. But he reversed his stance this week after an internal CIA inquiry found the spying indeed took place with the involvement of 10 agency employees. Brennan apologized to lawmakers in a briefing earlier this week. The White House is standing by Brennan, citing President Obama’s “great confidence” in his leadership. But at least two members of the Senate Intelligence Committee, Democrats Mark Udall of Colorado and Martin Heinrich of New Mexico, are calling for his resignation. We speak with the reporter who first broke the news of the CIA’s admission to spying on Senate computers: Jonathan Landay, senior national security and intelligence correspondent for McClatchy Newspapers.

AARON MATÉ: Central Intelligence Agency Director John Brennan is facing calls to resign after admitting CIA officials spied on a Senate panel probing the agency’s torture and rendition program. The allegations surfaced in March when members of the Senate Intelligence Committee openly accused CIA officials of illegally monitoring their staffers’ computers. At the time, John Brennan denied the spying allegations and said, “Those who make them will be proved wrong.”

JOHN BRENNAN: As far as the allegations of, you know, the CIA hacking into, you know, Senate computers, nothing could be further from the truth. I mean, we wouldn’t do that. I mean, that’s—that’s—that’s just beyond the—you know, the scope of reason in terms of what we would do. … When the facts come out on this, I think a lot of people who are claiming that there has been this tremendous sort of spying and monitoring and hacking will be proved wrong.

AMY GOODMAN: Well, CIA Director John Brennan reversed his stance this week after an internal CIA inquiry found the spying indeed took place, with the involvement of 10 agency employees. Brennan apologized to lawmakers in a briefing earlier this week. The CIA has also retracted counter-allegations that Senate staffers illegally removed classified information from a top-secret facility. The White House is standing by Brennan, citing President Obama’s, quote, “great confidence” in his leadership. But at least two members of the Senate Intelligence Committee, Democrats Mark Udall of Colorado and Martin Heinrich of New Mexico, are calling for Brennan’s resignation.

We’re joined by the reporter who first broke the news of the CIA’s admission to spying on Senate computers: Jonathan Landay, senior national security and intelligence correspondent for McClatchy Newspapers, also in Washington, D.C.

Thanks for being with us. Talk about this revelation that you just exposed.

JONATHAN LANDAY: So, after all of this, what had been this behind-the-scenes battle, unprecedented battle, between the CIA and its Senate overseers, apparently John Brennan asked his inspector general, David Buckley, to look into Senator Feinstein’s allegations that the CIA had in fact, without authorization, and in breach of an agreement with the Senate staff, had intruded into a database that was for the use by the Senate staff only. Apparently, David Buckley came back with his findings that a number of CIA IT specialists, three IT specialists, five CIA officers, and I believe it was two attorneys, had in fact either, without permission, breached the Senate committee’s database or caused it to be breached. We also find out that the complaint that the CIA referred to the Justice Department, containing allegations that the Senate staff had, without permission, without authorization, removed top-secret classified documents from the secret CIA facility in which they were doing their work, was apparently made on—with incorrect information, that it was not factually based.

So that’s gone away, although the Justice Department in fact had dropped the case at the beginning of last month, although, very interestingly, the Justice Department said that it had found no reason to proceed with a criminal investigation, or insufficient evidence to proceed with a criminal investigation at this time. So, it’s possible that the Justice Department could take a new look at all of this. We have to wait and see. There have been calls by some members of Congress and civil rights organizations that the Justice Department ought to take a new look at what went on. And, you know, the thing about all of this is that I think President Obama, the White House staff, the CIA, a lot of people on Capitol Hill had hoped to put this issue behind them once the Senate Intelligence Committee’s report is issued, and I don’t think this is going to go away anytime soon.

AARON MATÉ: Back in March, Senator Dianne Feinstein, the chair of the Intel Committee, she gave that speech on the floor openly accusing the CIA of breaking the law and of trying of undermine her investigation. But on Thursday, she didn’t repeat those charges. Does that signal that she’s backing down here? And what does that portend for what comes next?

JONATHAN LANDAY: Well, yeah, it’s interesting. You know, when she got on the Senate floor, she said—you know, it’s an extraordinary speech, where she said the CIA may have broken the law, may have violated the constitutional separation of powers between the executive branch and its congressional overseers. In her statement yesterday, she referred to the breach of the constitutional separation of powers, but there was no reference at all in her statement to the potential breach of law by the CIA, nor did she repeat her charge that she made in August—I mean, sorry, in March, that the CIA had sought to thwart her investigation into the CIA’s use of waterboarding and other harsh interrogation techniques on suspected terrorists or terrorist suspects who were detained in secret CIA prisons overseas under the Bush administration. It appeared that at that point, you know, there was perhaps an air of wanting to try and soothe the roiled waters with the CIA. The relationship between the CIA and the committee have been very, very bad.

But I think that following the briefing yesterday—there was a three-hour briefing to members of the committee, both Republicans and Democrats, by David Buckley, the CIA IG. You know, the senators came out of there, and they were pretty angry. A lot of them were pretty angry. It was an unusual unity and bipartisan fury, because there was a number of Republican senators, who in the past have been defenders of the CIA, who joined the Democrats in expressing outrage at what happened. And again, one of the main questions that all of them were asking was: Who authorized this? When did—and also, when did senior CIA managers, when did the leadership of the CIA find out about what happened? That is not—those points are not discussed in the IG report, and I think we’re going to see today more of those questions.

AMY GOODMAN: Very quickly, Jonathan, we’re just talking about the CIA—not just, but CIA spying on the Senate staffers, not the content of the report. Now, AP—amazingly enough‚ the White House just emailed by mistake the talking points of the report to AP. Very quickly, can you say what we’re going to see in this report—why the CIA is so concerned, why they’re spying on Senate staffers?

JONATHAN LANDAY: Well, we’re not—you know, the spying on Senate staffers appears to be a separate issue from the report itself. And we obtained the classified—20 classified conclusions of the report a couple of months ago, and in them, what basically they say is, A, that the use of waterboarding and other interrogation methods that many people view as torture had produced no valuable intelligence, or at least intelligence that couldn’t have been obtained through normal interrogation procedures; that the CIA misled the Bush administration, that included the Justice Department and the White House, the Congress and the American people, about the efficacy of the use of these methods. There are a variety of other findings that planted misleading information in the press, and that it indeed questioned the entire legal foundation that was produced by the Justice Department that allowed them to proceed with these procedures, that indeed the Justice Department’s legal findings may have been based on misleading information, as well.

AMY GOODMAN: Jonathan Landay, I want to thank you for being with us, senior national security and intelligence correspondent for McClatchy Newspapers. We will link to your most recent piece, ”CIA Admits It Broke into Senate Computers; Senators Call for Spy Chief’s Ouster.”

That does it for the broadcast. We have a job opening for an on-air graphic designer and CG operator. Go to democracynow.org for details. 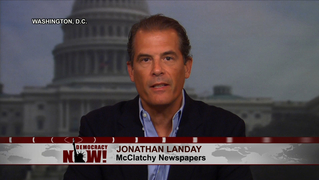