The Group of 8 Summit in Scotland concluded on Friday. G8 leaders lauded the meetings for making progress on African poverty and climate change, but there was widespread disappointment amongst anti-poverty campaigners and environmental groups. We go to Scotland for a report from David Miller, co-editor of “Arguments Against G8.” [includes rush transcript]

The G8 Summit in Gleneagles, Scotland came to a conclusion on Friday- a day after the terror attacks in London. Prime Minister Tony Blair returned to Geneagles from London and presided over the final sessions of the summit. He stated to the participants at the meeting that the acts of terror “would not obscure what we came here to achieve.” There was also much optimism from Live 8 organizer Bob Geldof and rock star Bono who hailed the results of the summit as historic and said the meetings were “the beginning of the end of poverty.”

But while the G8 leaders and rock luminaries insisted that great strides had been made in addressing African poverty and global warming, there was widespread disappointment amongst anti-poverty campaigners and environmental groups. Specifically, they pointed out that though all eight nations promised $50 billion a year in aid by 2010, the U.S had pledged no new money. And many activists said that the amount itself was inadequate–$25 billion was needed now with another $50 billion in 2010 if poverty targets are really going to be met. Groups also pointed out that no agreement had been reached on a deadline for eliminating agricultural export subsidies, which greatly hurt poor countries.

In terms of the environment, little progress was made in addressing global warming. President Bush in fact blocked efforts to agree on specific targets for reduction of greenhouse gases. Though Bush left the summit without making any public comment, the White House point person on the summit, Faryar Shirzad declared to reporters heading back from the meeting on Air Force One, that the meeting “was a huge success.”

AMY GOODMAN: We go to David Miller on the phone from Scotland, Professor of Sociology at the University of Strathclyde in Glasgow, co-editor of the recently released book, Arguments Against G8, welcome to Democracy Now!, Professor Miller.

AMY GOODMAN: Can you summarize what you feel came out of this G8 summit?

DAVID MILLER: Well, for the people of the world, the poor of the world, for those suffering the effects of climate change which will shortly engulf us all, less than nothing. Things have been made worse by the summit, but the commitments which they gave and their rhetoric, none of them have been met. You quoted Geldof and Bono there. I would quote in return the Make Poverty History campaign which led the campaign to get debt canceled and aid increased. I mean, this is a campaign which has been largely co-opted by the government, but they talk about it being vastly disappointing, that they have chosen not to even start to end poverty. They talk about the G8 having repeatedly failed on all areas of aid, trade and debt. This is the most conservative of the coalitionists involved in the campaign against the G8. And they are saying, not a mitigated disaster, but they’re saying that it’s not met the challenge in relation to anything.

You want to look at the comments of any of the other NGOs involved in Make Poverty History. Some of the slightly more radical ones — Christian Aid: “Vastly disappointing;” War on Want: “This is going backwards;” Oxfam: “The world’s richest nations have delivered some progress, but the outcome has fallen short of the hopes of millions;” ActionAid, saying that “the G8 failed to deliver on trade.” So all of the NGOs, including the more conservative ones who are very, very close to Blair and Bush, are saying that this is not really any step forward.

In relation to the announcement of $50 billion on debt cancellation, the shocking thing about this is that this is being reported all around the world as a new offer of $50 billion. It’s actually not a new offer. It’s the same offer which they made at the Sheffield meeting three weeks ago. It’s no new money at all, and as we saw when that offer was made itself, the sneaky thing, which the Bush and Blair administration have done is that they have made sure that they have got a clause in there which means any new debt relief comes off the aid budget. So there’s actually no new money going into Africa.

And of course, the worst thing, which to underline all of that, if that is wasn’t bad enough, is that the money is going to 18 countries, highly indebted, poor countries who are required to get the money, to sign up to privatization of their public services, health, education and water. And so what we’re seeing here is not just that they haven’t done anything to help the poor of Africa, but the communiqué with its extra money for debt relief is actually a means of creating more poverty in Africa and more inequality and of allowing Western trans-nationals in to rip off Africa’s resources and labor.

AMY GOODMAN: We’re talking to David Miller about the Gleneagles summit, the G8 Summit. What about the effects of the terror attacks on Thursday?

DAVID MILLER: Well, the first thing, of course, that the government did in relation to the terror attacks was to say that this will mean that the G8 Summit wouldn’t produce as good a communiqué as it otherwise would have been because Tony Blair had to be distracted by the results of the terror attacks in London. Of course, that’s the first way in which they want to spin it. They want to pretend that Tony Blair is the leading liberal light of the G8 trying to push reluctant governments, in particular the Bush administration, into some more enlightened policies. But, of course, this is the same spin story they have been using throughout, that they are the enlightened ones, when in fact they are pushing the neoliberal agenda.

The attacks, interestingly, the first attacks on Britain since 9/11, since Iraq, that the immediate line coming out of the government was, “This has nothing to do with Iraq.” And all the government’s apologists, including the kind of leading journalists who’ve been on television saying, “Nothing at all to do with Iraq.” But, of course, at the same time, and this is the very interesting thing underlying all this, the government have leaked a report from the Defense Secretary indicating that most of the British troops are now to be withdrawn from Iraq. So we’re seeing a very interesting process here.

And I would say that the question of how the movement responds to this is an interesting one and has already been shown to be quite different to how the movement responded in 2001. If you remember back then, many in the global justice movement, in the NGOs, the environmental groups, felt that it was impossible to criticize U.S. imperialism or Bush for a significant period after September 2001. But because of the experience of Iraq and because millions of people across the world, millions of people in the U.S. and in the U.K. know that they were lied to over Iraq, that response of the movement hasn’t taken place this time. And instead, what we are seeing is that, you know, we oppose civilians being targeted in London, as we oppose civilians being targeted in Iraq by the allies. This has very much to do with Iraq. And that’s why, of course, the government have emphasized that it’s nothing at all to do with Iraq, which just strikes many people in this country as simply preposterous.

AMY GOODMAN: David Miller, I want to thank you for being with us. Professor of Sociology at University of Strathclyde in Glasgow, is co-editor of a new book called Arguments Against G8.

Methods Developed by U.S. Military for Withstanding Torture Being Used Against Detainees at Guantanamo Bay

NEXTMethods Developed by U.S. Military for Withstanding Torture Being Used Against Detainees at Guantanamo Bay 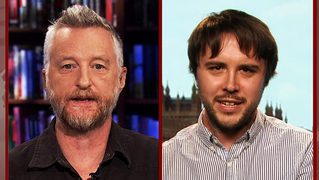