White House spokesperson Scott McClellan has been besieged the past two days at press briefings, with many journalists pummeling away with question after question about the involvement of Karl Rove in the outing of an undercover CIA operative. The White House has done an about face from 2003 when it adamantly denied any involvement on the part of Rove in the leak. We play an excerpt of Tuesday’s hearing. [includes rush transcript]

Several of the top leaders of the Democratic Party are calling on President Bush to fire his senior advisor, Karl Rove, over his alleged role in the outing of undercover CIA operative Valerie Plame.

Among the leaders of this effort is Senator John Kerry who yesterday said bluntly that Bush should fire the man many say is responsible for his two-term presidency. Kerry said, “Is the value of day-to-day politics, and the value of political advice, and the value of his position greater than the national security of our country, and the protection of the identity of people, as well as their own word and their own policy? The White House’s credibility is at issue here. I believe very clearly Karl Rove ought to be fired.” Kerry made that statement standing next to Senator Hillary Clinton of New York, who turned to the cameras and said, “I’m nodding.”

The past several days have seen some of the more dramatic political moments in DC in recent months with New York Times reporter Judith Miller being jailed for refusing to cooperate with a federal prosecutor investigating the Plame case; an about face by a White House that adamantly denied any involvement on the part of Rove and now growing calls for Congressional hearings and the resignation or firing of a man who is perhaps the most powerful unelected official in the US.

Meanwhile, Rove’s attorney Robert Luskin is charging that Time magazine reporter Matt Cooper “burned” Rove after the two spoke briefly about Plame and her alleged connection to the fact-finding mission to Niger of her husband Ambassador Joe Wilson, where he was sent to investigate claims that Iraq had attempted to import uranium from the African nation. In an email sent by Cooper to editors at Time following that conversation, Cooper wrote that it was Rove who said—quoting from that email, it was “Wilson’s wife, who apparently works at the agency on wmd issues who authorized the trip.” Cooper goes on to write that Rove “implied strongly that there’s still plenty to implicate iraqi interest in acquiring uranium fro[m] Niger…” Rove’s lawyer says Cooper, not Rove, initiated the call and that his client spoke to Cooper about the story only in an effort to stop Time from publishing false reports that Vice President Cheney or then-CIA director George Tenet had selected Joe Wilson for the mission. Luskin says Rove did not out Plame and he told the National Review “Karl speaks to him on double super secret background…I don’t think that you can read that e-mail and conclude that what Karl was trying to do was to get Cooper to publish the name of Wilson”s wife.” Despite these denials, this story is picking up momentum fast.

The White House is clearly scrapping to keep this story from growing even more damaging but has been unable to offer any believable defenses.

Spokesperson Scott McClellan has been besieged the past two days at the White House press briefings, with many journalists pummeling away with question after question about the scandal. At times it has seemed like McClellan is calling on reporters he often ignores or marginalized in the hopes they will ask about something other than Rove.

McClellan has tried to end all discussion of the case by saying it is an ongoing investigation. Here is some of the melee from Tuesday’s White House press briefing.

AMY GOODMAN: McClellan has tried to end all discussion of the case by saying it’s an ongoing investigation. Here’s some of the melee from Tuesday’s White House press briefing.

SCOTT McCLELLAN: And I think the American people can understand and appreciate that.

REPORTER: Well, we’ll see. But I just have one final question on this. The question of whether a law has been broken, a crime committed, is a separate matter. You’re not going to resolve that; that’s for a grand jury to decide. But we know what the facts are. We know that Karl Rove spoke about Joseph Wilson’s wife, referring to the fact that she worked at the Agency. You’ve heard Democrats who say that — say today that alone was inappropriate conduct. What was Karl Rove trying to accomplish by having the conversation he did? And does the President think that it was fair of him to do that? Was it fair game?

REPORTER: But, Scott, there’s a difference between what’s legal and what’s right. Is what Karl Rove did right?

REPORTER: All right, you say you won’t discuss it, but the Republican National Committee and others working, obviously, on behalf of the White House, they put out this Wilson-Rove research and talking points, distributed to Republican surrogates, which include things like, Karl Rove discouraged a reporter from writing a false story. And then other Republican surrogates are getting information such as, Cooper, the Time reporter, called Rove on the pretense of discussing welfare reform. Bill Kristol on Fox News, a friendly news channel to you, said that the conversation lasted for two minutes and it was just at the end that Rove discussed this. So someone is providing this information. Are you, behind the scenes, directing a response to this story?

SCOTT McCLELLAN: You can talk to the RNC about what they put out. I’ll let them speak to that. What I know is that the President directed the White House to cooperate fully with the investigation. And as part of cooperating fully with that investigation, that means supporting the efforts by the investigators to come to a successful conclusion, and that means not commenting on it from this podium.

SCOTT McCLELLAN: No, I understand your question.

REPORTER: Well, Fox News and other Republican surrogates are essentially saying that the conversation lasted for two minutes and that the subject was ostensibly welfare reform. They’re getting that information from here, from Karl Rove.

SCOTT McCLELLAN: And again, you’re asking questions that are related to news reports about an ongoing, continuing investigation. And you’ve had my response on that.

REPORTER: At the very least, though, Scott, could you say whether or not you stand by your statement —

SCOTT McCLELLAN: John, I’ll come back to you if I can.

REPORTER: — of September 29th, 2003, that it is simply not true that Karl Rove disclosed the identity of a C.I.A. operative? Can you stand by that statement?

SCOTT McCLELLAN: John, I look forward to talking about this at some point, but it’s not the appropriate time to talk about those questions while the investigation is continuing.

REPORTER: So should we take that as a yes or a no?

REPORTER: Can you explain why —

REPORTER: Scott, this was a statement you made, on the record, 21 months ago. You very confidently asserted to us and to the American people that Rove told you he had nothing to do with it. Can you stand by that statement now?

SCOTT McCLELLAN: Yes, and I responded to these questions yesterday. Go ahead, Dick.

REPORTER: Can you explain why the President chose today to break with his usual practice of taking two questions from the American side at events with a foreign leader, and only taking one?

SCOTT McCLELLAN: Just last Friday, I think, with Prime Minister Blair, or Thursday, they did the same thing.

REPORTER: The practice in the Oval Office is to take two questions. I’m just curious why —

SCOTT McCLELLAN: Well, we did that last week with Prime Minister Blair, as well. You’re going to have other opportunities to see him this week.

REPORTER: If he had responded to a question today about Karl Rove, would he have gone beyond your stance here of just not commenting?

SCOTT McCLELLAN: Well, you’re going to have other opportunities to ask him questions. He takes questions on a fairly regular basis, Dick.

REPORTER: Let me — let me just do what you did a few moments ago and step back from the context of the investigation to the President’s agenda. Does Karl Rove, with all the attention being paid to him now, become a liability to the President, an impediment to his pushing his agenda?

SCOTT McCLELLAN: See, you’re asking all these context in —- or all these questions in the context of the news reports relating to an investigation -—

REPORTER: I’m talking about it now in the larger sense of Rove being the Deputy Chief of Staff.

SCOTT McCLELLAN: We’re continuing to move forward on our agenda, and the —- we’re on the verge of accomplishing some very big things when it comes to the agenda. And -—

REPORTER: But is Karl Rove an impediment now, with all this attention distracting from that push on your agenda?

SCOTT McCLELLAN: Everybody who is working here is helping us to advance the agenda, and that includes Karl in a very big way.

REPORTER: Has he apologized to you for telling you he is not involved?

SCOTT McCLELLAN: Helen, I’m not going to get into any private discussions.

REPORTER: I mean, he put you on the spot. He put your credibility on the line.

REPORTER: You people are on the record, one quote after another.

SCOTT McCLELLAN: The President wants to get to the bottom of it. And it’s just not appropriate. If you’ll remember back two years ago, or almost two years ago, I did draw a line and I said, we’re just not going to get into commenting on —

REPORTER: You also made comments in defending Mr. Rove.

SCOTT McCLELLAN: We’re just not going to get into commenting on an investigation that continues. And I think you’ve heard me explain why I’m not going to do that. I do want to talk about this —

REPORTER: Do you regret putting yourself out on a limb, Scott?

SCOTT McCLELLAN: I do want to talk about this, and we will talk about it once the investigation is complete.

REPORTER: Do you regret putting yourself so far out on a limb when you don’t know the facts?

SCOTT McCLELLAN: David, you had your opportunity. I’ll try to come back to you if I can, but I think I’ve responded to those questions.

REPORTER: Well, you haven’t responded to that. Do you think you went too far two years ago?

AMY GOODMAN: White House Press Secretary Scott McClellan being questioned by reporters for the second day in a row, intensively, around the outing of the undercover C.I.A. operative, Valerie Plame, and Karl Rove’s role in that.

Before London Bombing, Leaked UK Memo Warned Iraq War a Key Cause for Growth of “Extremism” in Britain 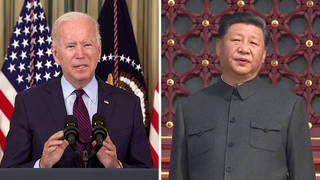