We speak with retired Memphis police sergeant Jerry Williams about the day Dr. Martin Luther King was assassinated. Williams, who worked in the homicide bureau, was twice assigned to head King’s security team on his visits to Memphis, but on the day he was assassinated, Williams says no black officers were assigned to King’s detail. [includes rush transcript]

AMY GOODMAN: On Sunday, we went to the Metropolitan Baptist Church and ran into a retired police detective.

JERRY WILLIAMS: My name is Jerry Williams. I’m a retired Memphis policeman. During the time of Dr. King’s assassination, I was working the homicide bureau in the Memphis Police Department. And on two previous occasions when Dr. King would come to Memphis, I was assigned to head his security team. But the last time he came, there were no black officers assigned for that security.

JERRY WILLIAMS: Well, I really don’t know. I just know that I reported to work on the morning of Dr. King’s assassination, and I was told by my inspector that we would not be on the assignment. So I commenced to do my regular duties as a homicide officer in the office, and later on, around 5:00 in the afternoon, we heard that Dr. King was assassinated. When we got the information in the office, Inspector Zachary said that we have to get down to the Lorraine Motel, that Dr. King had been assassinated. And I remember getting my hat and coat, and when I got to the door, the inspector said, “No, I’m going to have to have at least two officers to stay in the office, because we’re going to be getting calls from all over the country,” which we did. Within five minutes, we were getting calls from San Francisco, New York, Hawaii, and London, England, all wanting the confirmation of Dr. King’s assassination.

Shortly after that, I was called to the scene, where Dr. King was assassinated, to bring the camera. The police camera had broken, and, of course, we have cameras in our office in homicide, so I was told to bring a camera down there. So I carried the camera down there, and they proceeded to do the pictures at the scene. My partner and I left and went to the St. Joseph Hospital on North 2nd Street to view Dr. King’s body. And from that time on, we were assigned to work the homicide.

The lonely sanitation people who Dr. King gave his life for, they were the ones who stuck with him. They were the ones who marched and picketed City Hall, had the sign on, “I am a man.” They are the ones that had a tremendous effect on the change that took place here in Memphis, not these so-called professional people. It was the little person, the ones who worked on the sanitation trucks, who hauled the garbage in tubs on their shoulders. They were the ones that stuck with Dr. King. And these others — as I said earlier, these other people who came after his death, they was not there marching with him, as a whole. After his death, everybody came out the woodworks.

AMY GOODMAN: Did your view change of him?

JERRY WILLIAMS: Yes. My view — when I realized my office was across the street from City Hall, the homicide office in Memphis Police Department, on that January afternoon or morning, when I looked out and I saw those men, it was snowing. And they was walking in a circle, and as their backs turned to me and I saw that sign that said, “I am a man,” it had a definite effect on me, because I realized that time they was marching not only for themselves, but for me and all black people.

And I listened to some of the remarks that was made in the office. Some of my white associates, detectives, was in agreement, and there was some who was not in agreement. They said, for instance, “What do they want?” But there were some who said, “Would you want to work on a job where you are hauling garbage in a tin tub and the filth running down your shoulders on your back?” He said, “No, you wouldn’t want that,” said, “Those men are right.” So that’s just to kind of give you an idea of how the temperament was during that time.

AMY GOODMAN: Did you see Dr. King’s body at the Lorraine Motel?

JERRY WILLIAMS: Yes. I saw his body at the — as I said, we brought the camera down there. The attorney general was afraid of riding down there by himself, so he rode with me down to the scene. And then, when I left the scene, I went out to the hospital, and I saw Dr. King’s body. He had been cut from his chest all the way down to his stomach. And I asked the nurse why was that necessary. They said the doctor cut him open to try to massage his heart. And that was it. That’s about all I can remember. That’s been a long time, say, some 30 years ago, but I do remember that much of it. And I do know that had it not been for Dr. King giving his life here in Memphis, things would have been a lot different. Things did not begin to open up until after he came and made that terrific sacrifice.

National Civil Rights Museum: The Motel Where Dr. King was Shot Today a Museum That Preserves His Legacy

NEXTNational Civil Rights Museum: The Motel Where Dr. King was Shot Today a Museum That Preserves His Legacy 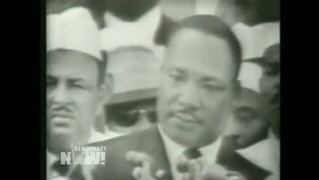 On Eve of MLK Day, Michelle Alexander & Randall Robinson on the Mass Incarceration of Black America