Bush’s New Energy Proposals: A Break from the Past or More of the Same?

AMY GOODMAN: In his State of the Union, President Bush introduced proposals to cut U.S. gas consumption by 20 percent over 10 years and ease the country’s dependence on foreign oil. The president steered clear of calling for mandatory caps on U.S. carbon dioxide emissions and rejected calls for a commitment to stricter fuel economy rules. Instead, Bush said the bulk of the reductions in gas consumption are to come from increased use of alternative fuels.

PRESIDENT GEORGE W. BUSH: We must continue changing the way America generates electric power by even greater use of clean coal technology, solar and wind energy, and clean, safe nuclear power. We need to press on with battery research for plug-in and hybrid vehicles and expand the use of clean diesel vehicles and bio-diesel fuel. We must continue investing in new methods of producing ethanol, using everything from wood chips to grasses to agricultural wastes.

We made a lot of progress, thanks to good policies here in Washington and the strong response of the market. And now even more dramatic advances are within reach. Tonight, I ask Congress to join me in pursuing a great goal: Let us build on the work we’ve done and reduce gasoline usage in the United States by 20 percent in the next 10 years. When we do that, we will have cut our total imports by the equivalent of three-quarters of all the oil we now import from the Middle East.

America is on the verge of technological breakthroughs that will enable us to live our lives less dependent on oil. And these technologies will help us be better stewards of the environment, and they will help us to confront the serious challenge of global climate change.

AMY GOODMAN: President Bush, in his State of the Union. Andrew Revkin is with us now, an award-winning science reporter for The New York Times, author of a number of books, including Global Warming: Understanding the Forecast and The North Pole was Here, joining us on the phone from upstate New York. Your response to President Bush’s proposals that he laid out last night? Start with 20 and 10 — 20 percent curb on gas usage over the next 10 years.

ANDREW REVKIN: Well, my understanding of it, of what he’s talking about, is a 20 percent reduction from projected growth of gas usage. In other words, it’s not 20 percent less than we’re using now. So it’s actually a very modest step, according to most experts that are looking at this. And the solutions, this idea — in fact, last night I was trying to get us to just kind of not use the word “renewable” when we talk about renewable fuels, because not all “renewable,” quote/unquote, fuels are renewable. If you are quintupling our production of corn-based ethanol as an alternative to gas, you’re setting the stage for all kinds of other problems. In fact, I noticed that even Senator Inhofe, the guy who actually attacked The North Pole was Here on the Senate floor last year — he’s not, you know, a fan of the environment, by most accounts — he was very reserved in how he treated the president’s call for ethanol as being the alternative. From his standpoint, it’s not clear that that can even happen, and environmental groups have many other concerns about that, as well.

AMY GOODMAN: What about President Bush acknowledging, and the overall administration — something you’ve written a lot about — acknowledging global warming?

ANDREW REVKIN: Well, this was a first. You know, last year he acknowledged that we’re addicted to oil. This year, it was the first time in a State of the Union address he said that — he mentioned climate change as being a serious issue. In 2005, he did cross the threshold and actually said humans are influencing the climate through the buildup of greenhouse gases and it’s a, quote/unquote, “problem,” so he’s kind of already crossed that threshold. But what has some people worried is that the pace — it’s almost like trying to get my kid to do one of his homework projects. There’s something about this slow reluctant pace of addressing this that many people are concerned about now, particularly given the growing evidence that humans can dangerously transform the climate system, you know, if we don’t act promptly.

AMY GOODMAN: What about President Bush not offering a plan for mandatory emissions limit?

ANDREW REVKIN: Well, most of the folks I talked to for weeks leading up to this didn’t anticipate that there would be such a step taken by this administration. They have been pretty clear that ever since 2001, when he first made a speech on the subject, that sometime around 2012, after he’s out of office, by any calculation, that that would be the time to reassess, which is, you know, again, for many people focused on this, scientists and others, now this is way too slow a pace.

AMY GOODMAN: What would an emissions cap mean?

ANDREW REVKIN: An emissions cap, it all depends on, you know — the bottom line — I wrote a long story for the paper as part of our energy challenge series — that’s all still online and ongoing — on the reality is the only kind of cap on carbon dioxide emissions that would really be meaningful in the long run, that would really change the way industry works and change the way people think about energy, is one that’s guaranteed to become tighter and stricter through time, and not just through a few years, but through essentially the rest of this century. We have to sort of squeeze ourselves progressively harder on these emissions. And that isn’t in any of the bills. Well, again, on paper it’s in some of the bills that are floating in Congress now, but those are the ones that are least likely to actually see someone’s signature on them and move ahead, unfortunately, because it is a big challenge.

The one thing that also wasn’t really mentioned, except in passing — that comment about battery research — is that — and environmental campaigners have a hard time focusing on this, too — is that there really needs to be a technology quest here, the likes of which we haven’t pursued since the space race, because to have a real prospect of meeting any of the serious emissions caps, you have to have new things on the table besides what we have today.

AMY GOODMAN: Andrew Revkin, I want to thank you for joining us for these brief moments, prize-winning science reporter with The New York Times. His new book is called The North Pole was Here. 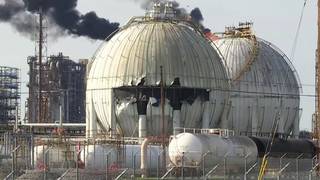