The View from Nairobi: Nobel Peace Laureate Wangari Maathai Reacts to State of the Union from the World Social Forum in Kenya

While President Bush delivered his State of the Union address, more than 80,000 people have been gathering in Kenya this week for the seventh annual World Social Forum. The theme of the meeting is “People’s Struggles, People’s Alternatives — Another World is Possible.” Nobel laureate Wangari Maathai joins us from Nairobi. [includes rush transcript]

AMY GOODMAN: While President Bush delivered his State of the Union address, more than 80,000 people have been gathering in Kenya this week for the seventh annual World Social Forum. The theme of the meeting is “People’s Struggles, People’s Alternatives — Another World is Possible.” Many of the topics on the agenda, from poverty and war to climate change and the environment, are among those President Bush highlighted in last night’s address.

For a different perspective on these issues, we go now to Nairobi, where we’re joined on the phone by Kenyan Nobel Peace Prize winner and environmentalist, Wangari Maathai. Welcome to Democracy Now!

WANGARI MAATHAI: Thank you very much, Amy. It is wonderful to hear your voice.

WANGARI MAATHAI: Well, as you can imagine there are hundreds of grassroots people here in Nairobi sharing their experiences, sharing their stories, educating each other, sharing information, and, of course, thinking that the rest of the rich world doesn’t care. And as you know, this forum was inspired by Davos, and as we speak, Davos is also going on. And those are the two worlds in which we live. And we must find a way of bridging the gap so that we can live in a better world.

AMY GOODMAN: And the effect of the war in Iraq, how is that affecting the World Social Forum this year and how is it affecting Africa?

WANGARI MAATHAI: Well, of course, there are a lot of groups that are addressing the issues of human rights issues, addressing the issue of terrorism, addressing the issue of threats to peace in so many countries. And as you know, right here in Kenya, we are next door to Somalia, which only recently was — in fact, as we speak, is undergoing a very challenging period. And we know that part of the problem is the connection with the terrorist agenda. And so, we are very, very concerned, and we are very impacted by it, because for many years, as you know, small arms have been coming across the border, and they have made security in Kenya very difficult.

AMY GOODMAN: The World Social Forum of tens of thousands of people also deals with the environment. You’re founder of the Green Belt Movement of Kenya. Briefly explain what that is.

WANGARI MAATHAI: Well, the Green Belt Movement is a grassroots organization, which addresses the issue of environmental degradation, tries to rehabilitate the environment, working with local grassroots organizations and groups, so as to educate people to take care of their immediate environment. And in the process, we have come to appreciate the fact that the national resources are very limited on the planet in which we live, and we need to learn to manage them more responsibly and more accountably and to promote the sharing of these resources more equitably, so as to preempt the causes of conflict. And we know that many wars that are being fought, even as we speak, are over resources. Some people are thinking that they should control these resources or they should say who accesses them and who doesn’t. And people trying seek justice by saying no, they have every right to economic justice, they have every right to fight poverty, to eliminate poverty. So what is happening here at the Social Forum is really a reflection of what is happening in many parts of the world, including Iraq and the Middle East, in general.

AMY GOODMAN: I wanted to play for you, Wangari Maathai, the comment of President Bush, a clip of what he had to say last night in his State of the Union address.

PRESIDENT GEORGE W. BUSH: American foreign policy is more than a matter of war and diplomacy. Our work in the world is also based on a timeless truth: To whom much is given, much is required. We hear the call to take on the challenges of hunger and poverty and disease, and that is precisely what America is doing.

We must continue to fight HIV/AIDS, especially on the continent of Africa. Because you funded the Emergency Plan for AIDS Relief, the number of people receiving life-saving drugs has grown from 50,000 to more than 800,000 in three short years. I ask you to continue funding our efforts to fight HIV/AIDS, and I ask you to provide $1.2 billion over five years so we can combat malaria in 15 African countries.

I ask that you fund the Millennium Challenge Account, so that American aid reaches the people who need it in nations where democracy is on the rise and corruption is in retreat. And let us continue to support the expanded trade and debt relief that are the best hope for lifting lives and eliminating poverty.

WANGARI MAATHAI: Well, I must say that yesterday I attended one of the sessions which was discussing the issue of cancellation of the debts, and so it is interesting that the president should mention it. Let us not forget that we have been fighting for years for the cancellation of the debts, and that especially in the year 2000, over 17 million people sent the application to G8 countries to cancel the debt, because as long as some of the poorer countries, especially those in Africa, continue paying these debts, with all the interest rates that we know about, they cannot fight diseases such as the president is mentioning — HIV, malaria, TB, and such preventable diseases.

It is also important that he mentions trade. But how many times do we mention the fact that at the World Trade Organization rules and regulations make it impossible for continents such as Africa to benefit. So, all I can say is that listening to the president, it sounds wonderful, but where is the action? That’s what is important.

AMY GOODMAN: What exactly — what would real debt relief mean for African countries? Explain what it is, why this global movement, which we hear very little about in this country, is growing so strong.

WANGARI MAATHAI: Well, I think that for many people in the world, when they hear that we are seeking for debt cancellation, they are not supportive, because they feel that if you have a debt you have to pay. And that’s why we have now put the adjective: “illegitimate” debt. And that is to educate that the debt that we are talking about are debts that were loaned to governments which had no intention of using those debts for development or for the benefit of the people in whose name those debts were borrowed, and the governments or the financial institutions that loaned that money knew that that money was going to either be stolen through corruption, which the president has mentioned, or it was going to be used for personal aggrandizement, rather than for development.

And so, we say that the principle of loaning and borrowing, especially when you are loaning on behalf of the people, is that once you know that the money was not going to be used for development and for the benefit of the people, you should have stopped giving that money.

Secondly, the people who borrowed, many of them, it is known where they have hidden that money, and it should have been possible to access that money and to pay the debt. If we accept that these debts are illegitimate, as far as the poor people who are now having to pay our concerns, then we can understand why we say that these debts should be canceled. They are illegitimate. They are unfair. They are unjust.

AMY GOODMAN: Wangari Maathai, we have to leave it there, and I want to thank you very much for being with us. Wangari Maathai, founder of the Green Belt Movement in Kenya, the 2004 Nobel Peace Prize winner, speaking to us from the World Social Forum in Nairobi, Kenya.

Bush’s New Energy Proposals: A Break from the Past or More of the Same?

NEXTBush’s New Energy Proposals: A Break from the Past or More of the Same? 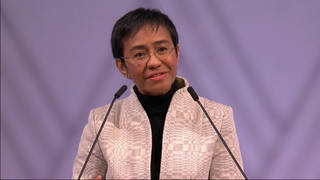