Ted Glick is the coordinator of the U.S. Climate Emergency Council. He is on the 32nd day of a fast to protest the failure of lawmakers in Washington to address climate change. [includes rush transcript]

AMY GOODMAN: The United Nations emergency relief coordinator has warned the world has seen a record number of floods, droughts and storms caused by climate change this year. Sir John Holmes told The Guardian newspaper the dire predictions about the impact of global warming on humanity were already coming true.

The U.N. Office for Coordination of Humanitarian Affairs has issued a record 13 emergency appeals this year. All but one of the appeals dealt with a climate-related disaster. The U.N. believes 66 million people were made homeless or were affected by the catastrophic flooding in Asia this year. Just this week, the U.N. issued a call for emergency funds for Ghana, where flooding has left more than 400,000 people homeless.

Our next guest, Ted Glick, is the coordinator of the U.S. Climate Emergency Council. He is on the 32nd day of a water-only fast to protest the failure of lawmakers in Washington, D.C. to address climate change. Ted Glick is also helping to organize the No War, No Warming action in Washington on October 22. Welcome to Democracy Now!, Ted.

TED GLICK: Thank you, Amy. I appreciate it.

AMY GOODMAN: I saw you in Newark, New Jersey, at an antiwar protest. You are a lot thinner now. How much weight have you lost?

TED GLICK: I lost about 30 pounds.

AMY GOODMAN: Where are you doing this?

TED GLICK: One thing I do want to correct: I fasted on water only for 25 days; since then I’m now onto liquids. I’m taking fruit and vegetable juices and miso broth, but I am continuing the fast. I have no plans for when I’m going to end it.

This is a climate emergency fast that was begun on September 4th, the day that the U.S. Congress came back into session after its summer recess. Both Nancy Pelosi and Harry Reid said prior to the opening of that fall session that they wanted to have global warming legislation passed this fall. It should be noted, Nancy Pelosi said when she came into office back in January that she wanted to have global warming legislation passed by July 4th. That didn’t happen.

It should also be noted that this summer, there were two versions of a energy bill passed: one by the Senate, one by the House. They’re not the same. It’s now a month. It’s now a month since this Congress came back, and nothing is happening as far as moving forward to try to reconcile the two versions of that energy bill. Neither — the Republicans are dragging their feet, and the Democrats are not using the power that they have to move this forward.

As far as global warming legislation, there are committees that are meeting, there a variety of different pieces of legislation that have been introduced. The best one, the strongest one, is the Safe Climate Act, as it’s called in the House. It has 140 co-sponsors, introduced by Henry Waxman. It would reduce carbon emissions 80 percent by 2050 and begin the process within a year or two of passage of reducing emissions, which is absolutely what we have to do.

But it’s committee work that’s going on. I went to Capitol Hill about two weeks ago. I went around to about 15 offices in the House and the Senate, talking to key people who are involved in these efforts to come up with climate legislation. I came away from that convinced that barring basically a grassroots political uprising, barring people in this country demanding of their senators and their Congress people that they get it on the urgency of this crisis, that we will be lucky to see any bill coming out of committee and onto one of the floors of Congress before sometime next year. There is no sense of urgency about the climate crisis. Just as we see with the war, there is no sense of the need to get our troops out and to take whatever actions are necessary, when it comes to the Democratic Party leadership and the few Republicans who are willing to also move in that direction. So there is a need for, quite frankly, more extreme actions.

I’ll admit that a fast is extreme. It’s something you do — a lot of fasts tend to come from prisoners. I was in prison myself during the Vietnam War for about a year. My first hunger strike was with Father Philip Berrigan during my time in Danbury Federal Prison. That’s where usually hunger strikes come from. But I became involved with this action, and other people have participated in this action, because in many ways we are in a prison right now. We have a federal government that is ignoring the needs of the American people, conducting an illegal war, doing very little in terms of responding to the urgency on climate crisis, on one issue after the other. We are in many ways in a prison. So this fast is a way of saying, “Let’s step it up. Let’s move the agenda. Let’s do more than we’ve done.” That’s what I’m trying to get across in the strongest way that I know how.

AMY GOODMAN: And your plan for October 22nd?

TED GLICK: October 22nd is the primary action that No War, No Warming is organizing here in Washington, D.C. There will be many hundreds, hopefully thousands, of people, who on that Monday, on a day that Congress is in session, are going to be up on Capitol Hill. We’re going to be erecting windmill blockades in intersections. We’re going to be sitting in front of doors. There will be bicycle blockades. There will be various creative nonviolent actions to let this Congress know that people are really outraged at the lack of action on the war, the lack of action on global warming, the lack of action on putting resources into New Orleans, rebuilding the Gulf Coast, putting resources into communities that need them, healthcare, education. It goes right down the line. These people need to understand we’re angry, we’re not going to just sit back and do the same old things. We’re willing to step it up. We’re willing to use our bodies. That’s what I’m doing with this fast and what I hope many other people will do in the ways that they can and join with us on October 22nd in D.C., as well as around the country. There’s actions around the country, part of No War, No Warming. There’s more information at our website, nowarnowarming.org.

AMY GOODMAN: We’re going to leave it there, Ted Glick. Thank you for joining us, coordinator of the U.S. Climate Emergency Council on the 32nd day of a climate emergency fast. Please take care of yourself. 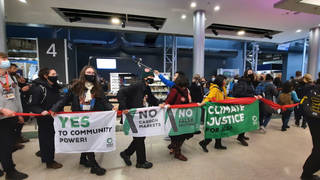