This week alone, three African-American men were shot and killed by police officers in Brooklyn, Chicago and Newark. The weekend’s events include a march on the Department of Justice and a rally and concert at the Washington Monument. We speak to Rosa Clemente, executive director of the Hip Hop Caucus and a longtime activist and journalist. [includes rush transcript]

AMY GOODMAN: We turn now to the activists who are arriving here in Washington, D.C., from across the country for a weekend of protests against a wave of hate crimes and increased police brutality, they say. This week alone, three African-American men were shot and killed by police officers in Brooklyn, New York; in Chicago; and in Newark.

Reverend Al Sharpton’s National Action Network is leading a march on hate crimes at the Department of Justice today. The Hip Hop Caucus is organizing a rally and concert at the Washington Monument on Saturday. It’s called “Enough Is Enough: Stop Hate Crimes and Police Brutality.”

Rosa Clemente is the executive director of the Hip Hop Caucus, longtime activist and journalist, joining us here in Washington, D.C.

Welcome, Rosa. Tell us about these rallies.

ROSA CLEMENTE: Thanks, Amy. Thanks for having us.

Well, I mean, look at what’s happening. And for us to say, “Enough is enough,” is just the beginning. Our rally and concert have been marched for a very—have been organized for a very long time, post-the Jena Six mobilization, the rape and torture of Megan Williams, the rape and torture of a young mother in Dunbar Village, to Sean Bell last year, to the recent Kyle Coppin, but particularly here in D.C. the case of a young man by the name of DeOnte Rawlings, that about four-and-a-half weeks ago was murdered by the police, the Washington Metropolitan Police. So we’re coming here, very supportive of what’s going on on the 16th, today, here by the National Action Network.

But as the Hip Hop Caucus and a generation, we’re not seeking much, and we don’t believe we’re going to get much from the Department of Justice, or really a lot of this governmental intervention is not what we’re looking for. What we’re really looking for is to bring young people outside, to get them into a place [inaudible] is about with massive amounts of education on the 17th.

AMY GOODMAN: Can you talk about these cases of the police killings in New York, in Newark, as well as Chicago?

ROSA CLEMENTE: Yeah, I mean, as a longtime activist in New York, what’s interesting is almost eight years ago I was on your show for the first time in Albany, New York, when the venue change happened in the Amadou Diallo trial in late 1999, when the trial was moved from the Bronx to Albany. So, in terms of the work around police brutality, I’ve been part of many organizations—Malcolm X Grassroots Movement and the Justice—the People’s Justice Committee out of New York.

I don’t think we’re seeing an increase. I think what we’re seeing is kind of the standard. It just happens to be in the last year—yes, OK, we’ve seen an increase, but what we’ve been seeing really in the last year is, at this point, a complete disregard for young people’s lives. And the police are not even trying at this point to cover up their stories, which is—they’re just coming out and saying, “Kyle Coppin had a gun; we had to shoot him,” even though this young man had bipolar and his mother had been trying to get him mental health.

We have the case of Sean Bell, 50 shots. Almost a year later, now the defense team is asking for a delay in the trial, ironically, to start on February 4th, 2008, nine years after Amadou Diallo was murdered in the Bronx. But they’re also asking for a venue change.

So we see this kind of—it’s the standard, it’s repetitive. But now what we’re seeing is a nationwide pandemic. We have, in 24 hours, Kyle Coppin in Brooklyn, murdered by the NYPD; an aspiring rapper in a group called Psychodrama out of Chicago, Illinois, murdered at a stop; the young man in Newark whose name we don’t know. And there has been six police shootings in D.C. in the last year. And now we’re seeing the rape and torture of young women of color. So this is part and parcel of just a wave of violence and terror against young people of color, particularly in this hip-hop generation.

AMY GOODMAN: Rosa Clemente, I want to thank you for being with us, executive director of the Hip Hop Caucus. She’s a longtime activist and journalist. The protest will be taking place, the rally that she is a part of, tomorrow; Reverend Sharpton’s today at the Department of Justice. 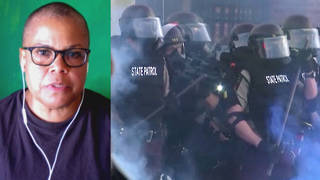