256 prisoners held at prisons in Iraq, including Abu Ghraib, filed a lawsuit on Monday against the private military contractor, CACI. The suit alleges the prisoners were repeatedly sodomized, threatened with rape, kept naked in their cells, subjected to electric shock, attacked by unmuzzled dogs and subjected to serious pain inflicted on sensitive body parts. The suit alleges that employees of CACI directed soldiers to mistreat the prisoners. [includes rush transcript]

AMY GOODMAN: We’re going to turn now to another company. Blackwater is not the only private US corporation facing lawsuits for alleged abuses in Iraq. On Monday, hundreds of Iraqis held at Abu Ghraib and other Iraqi prisons filed a lawsuit against the private military contractor, CACI. The company itself calls itself CACI.

The lawsuit was filed, once again, by Susan Burke and the Center for Constitutional Rights, joining us today in our studio, as we’ve been talking to her through the hour. Talk about this lawsuit you’ve just filed in the last day.


SUSAN BURKE: Well, this is actually a continuation of a lawsuit that we previously filed back in June of 2004. We had brought it as a class action after the leaking of the Taguba Report and after we had been approached by some of the victims of the Abu Ghraib torture.


And one thing I would point out is that this — CACI’s conduct in this instance — CACI employees were directly involved in torturing prisoners. This is information that’s known. It’s information that is known to the Department of Justice. Yet, there have not been any criminal prosecutions. So when you think about the passage of time here, you have to ask: why have there been no criminal prosecutions? It’s very troubling, and it’s very concerning that our civil action is the only current mechanism for accountability for the private participation in the Abu Ghraib scandal.


The other comment I would make is that there’s a perception that it was just the Abu Ghraib scandal and that that’s the only place where the torture occurred. You know, sadly, that’s just not true. The same type of conduct was happening elsewhere. People were being mistreated in other facilities. And again, CACI was not in all of the facilities, but they were in a substantial number, and their employees participated.


AMY GOODMAN: We invited CACI to join us on the program today, but they declined our request. CACI spokesperson Jody Brown issued the following statement, though. She said, “CACI totally rejects and denies all the plaintiffs’ allegations and clams in their amended legal filing of December 17, 2007. These accusations and allegations in their latest and ever-changing lawsuit are a rehash of their original baseless submissions. The attempt by plaintiffs’ counsel to portray CACI as engaged in a conspiracy to abuse detainees is unmitigated fiction perpetrated by plaintiffs’ counsel as part of their big lie propaganda campaign to keep their lawsuit afloat and their personal political agendas in the public light. Three-and-a-half years after filing their original complaint, not one of the more than 200 plaintiffs has connected their generic allegations of abuse to any CACI personnel. No CACI employee or former employee has been charged with any misconduct in connection with CACI’s interrogation work in Iraq. From day one, CACI has rejected the outrageous allegations of this lawsuit and will continue to do so.” Susan Burke, your response?


SUSAN BURKE: Well, the reality is that the information that we have is information that is under oath testimony from court-martials. And so, there are — the co-conspirators, the people that are serving time in prison, are the ones that are identifying Big Steve and DJ and the others as having given them the orders to torture. So for CACI to be — it’s interesting that CACI is so aggressive in their denials, when they know that on the record in under oath testimony is direct evidence.


AMY GOODMAN: What do you mean, court-martial testimony?


SUSAN BURKE: There were a series of court-martials, when Charles Graner was convicted, Frederick —- Sergeant Frederick was convicted. And so, the testimony from the convicted torturers has labeled -—


SUSAN BURKE: Yes, the CACI interrogators were placed in the role of the military intelligence.


AMY GOODMAN: We’re going to have to leave it there, but we’re going to continue our discussion tomorrow. We have been talking with Susan Burke, working with the Center for Constitutional Rights, about the CACI lawsuit and the two Blackwater lawsuits about two attacks, September 9th and September 16th. And special thanks also to Jennifer Daskal of Human Rights Watch. 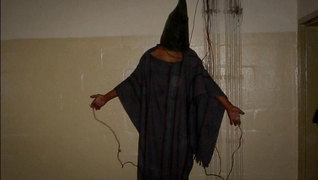